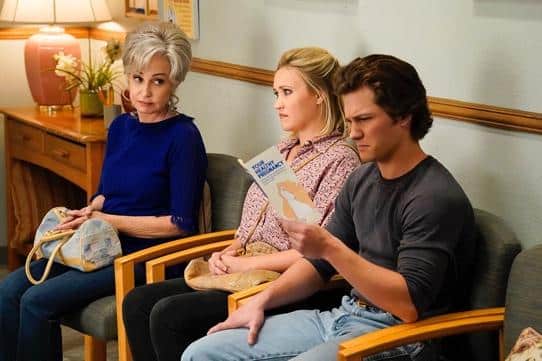 The episode opens with Mary meeting with Pastor Rob over coffee in the park. She wants to talk about the way everyone is treating her now that word is out about Georgie getting a girl pregnant. He asks her how she would react if the situation were reversed, giving her time to think.

At Sunday school, Sheldon and Missy know people are talking about the family. Missy is ready for them and Billy is ready to back her up. When one of the kids starts in on her, Missy punches him in the face.

Pastor Rob, George, Mary and Pastor Jeff have a meeting regarding the fight. After some back and forth, Pastor Jeff decides that Mary should take some time off from the church until things blow over.

At home Mary and George argue about whether or not Missy should be punished. Mary tries to get her to go to her room, but George tells her to continue watching MTV….until Mary leaves.

Georgie wants to know what is going on and is upset when he finds out the fight was about him.

Mandy goes to visit MeeMaw and tells her that she told her parents about the baby. They told her she was on her own. MeeMaw comforts her and promises to be by her side while they bond over food and drink.

Pastor Rob visits Mary to talk about everything and pray over the situation. Missy catches them and is sent to her room for missing school…even though she left because she couldn’t punch anyone else.

Georgie is at work when MeeMaw is leaving. He wants to know where she is going, but he refuses to tell her. This leads to him following her and finding her doctor with Mandy. When it comes time for her to see the doctor, she refuses to let him go, so MeeMaw goes in with her instead.

Sheldon tells President Hagemeyer about what is going on, even though she doesn’t seem to be interested.

Wayne and Tom are at the bar with George. The two of them talking, completely ignoring George and talking smack on him. He ends up leaving and telling them off.

When he gets home, Mary tells him Pastor Rob dropped by, which leads to a fight and Missy getting upset again. George storms out.

President Hagemeyer calls Mary about what’s going on at home. Mary ends up breaking down, but President Hagemeyer still doesn’t seem interested. When Mary gets off the phone, she begins to cry, so Missy comes out to give her a hug.

At dinner, Sheldon wonders where George is, so Missy covers for him by saying he is working late. Georgie says he went to the doctor with Mandy and he is wearing her down.

The episode ends with the family praying before they eat.