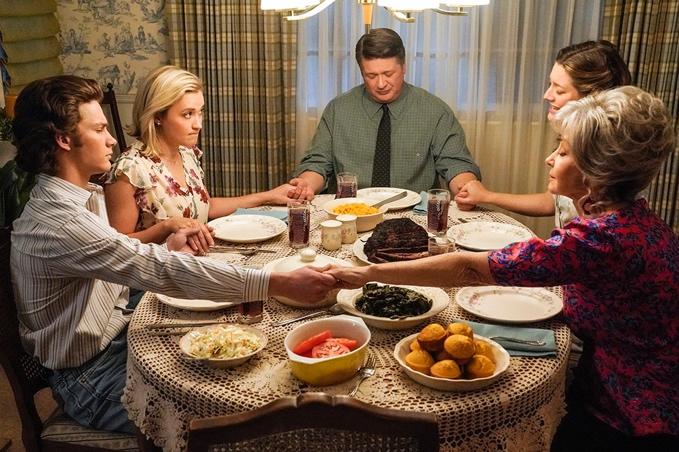 The episode opens with the aftermath of Georgie’s big revelation regarding Mandy and her pregnancy. George is freaking out and tries to make sure she is indeed pregnant and it is Georgie’s baby. He freaks out even more when he finds out Mandy’s age.

George tells Georgie that he has to tell Mary, which freaks him out even more. At that moment, Mary walks in, wondering what is going on. Georgie tells her the big news, causing her to freak out. The three of them argue over whether or not Georgie should marry Mandy.

Missy is singing along to Billy Ray Cyrus when Sheldon comes in, wanting to know where their parents are. He says they are not around, so Missy goes to watch movies. Sheldon knocks on the door and reports to them what Missy is doing.

That night. George can’t sleep so he goes to the kitchen, where he spies Mary smoking outside. She tries to hide it, but he says she earned this one.They talk about the whole situation and continue to debate about if the marriage should happen. They also reflect on when they were in this situation and how they handled things.

George goes back to bed while Mary goes to tell Georgie he was a gift from God, but she is very mad at him.

The next morning, Mary starts to tell MeeMaw what is going on, but Missy walks in, wanting to know details. They tell her nothing is wrong and wait for her to leave. Sheldon then walks in, looking for his Thursday socks. Once he gets them from the dryer and leaves, Mary apologizes for her out of wedlock pregnancy and tells her Mandy is pregnant.

Sheldon and Missy talk about the odd behavior in the kitchen. Sheldon thinks it is nothing, but Missy is worried.

George tells them he is taking them to school and they wonder if he is sick. They try o figure out what is going on, but no avail.

MeeMaw and Mary continue to talk when Georgie walks in. Mary tells him they need to meet Mandy, but he says that she doesn’t want to meet them.

MeeMaw goes to talk to Mandy about everything. She says she hasn’t even told her parents yet, but MeeMaw lets her know that she has her back.

Later that night, Mary sends Missy and Sheldon to the Sparks house, while everyone else prepares for Mandy’s visit. When she arrives, everything is awkward and strained. It only gets worse when Mary brings up religion and makes them say grace. It only gets worse when the topic of marriage comes up. This causes George and Mary to fight and MeeMaw to start drinking.

At the Sparks place, Billy and Brenda make small talk while Brenda prepares dinner. Billy wonders why Sheldon and Missy are there and they say they think something is happening at home, such as their dad being sick or their parents are getting divorced. Brenda tells them that everything is fine and tells them to eat.

Later on, Mandy and MeeMaw have a heart to heart and hug it out.

The next day, Georgie visits Mandy at work, but only succeeds in annoying her.

The episode ends with Missy telling Sheldon that she heard their parents talking about a baby, leading to them thinking Mary is the one who is pregnant/