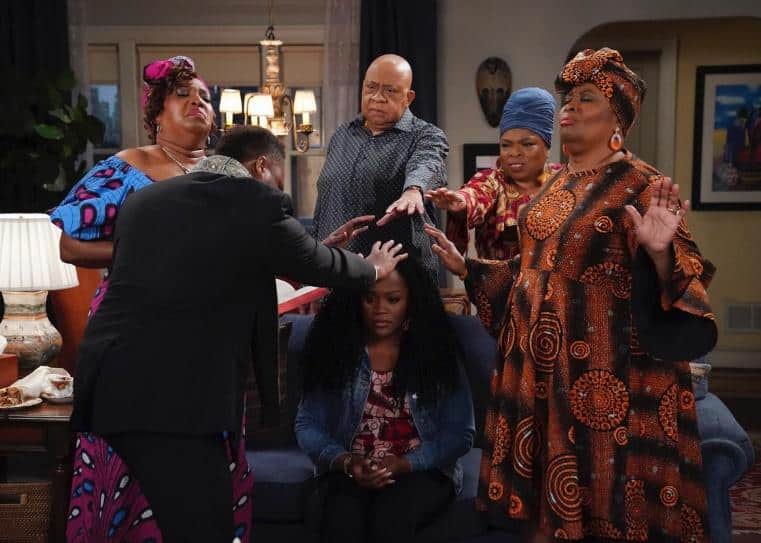 This week’s episode opens with Olu (Shola Adewusi), Tunde (Barry Shabaka Henley), Abishola(Folake Olowofoyeku) and Kemi (Gina Yashere) in church. They are talking at watching Ebun and Ogechi together. Meanwhile, Bob(Billy Gardell) and Chukwuemeka (Tony Tambi) talk about Morenike (Tori Danner) and how they are no longer together. Bob thinks it is because Morenike is a lesbian and accidentally outs her, leavin Chukwuemeka in shock.

On the way home, Bob tries to tell Abishola about his mistake, but keeps beating around the bush.

Ebun, (Saidah Arrika Ekulona) for her part, gushes over life in America and says she wants to stay. Abishola doesn’t think this is a good idea and says that Dele needs her in Nigeria. Bob offers to go to Nigeria in her place because he knows Abishola will be mad at him.

Douglas (Matt Jones) is on the bus with his new love interest Olivia (Edy Ganem) and gives her a snack. They banter a bit before agreeing to go on a date. Olivia then yells at the guy in a Porsche in front of her, making Douglas pretend he is poor once again.

Kemi, Gloria (Vernee Watson) and Abishola talk about the issue with Morenike’s sexuality being made public before she is ready. Gloria snarks that it is hard to believe that Ogechi can be a bigger gossip than Kemi, but Kemi assures her it is true. She then decides to spread a rumor about Ogechi so Morenike won’t be hurt.

and Goodwin (Bayo Akinfemi)for date ideas. As they chat, Bob walks in and asks what is going on. Douglas tells him about Olivia and how he is pretending to be poor to impress her. Bob wants to know Bus Doug.

Kemi, Abishola and Bob go to the house to warn Morenike, only to find the family praying over her. They try to stop it by pointing out other hypocrisies, but this only leads to Ogechi shaming Kemi and fighting with Ebun, who brings up the rumor Kemi spread. Morenike is happy that the attention is off her for a bit.

Douglas goes on the bus and tells Olivia the truth, who is unhappy to find out that he lied. He is crushed as he goes to the back of the line.

Olu and Tunde talk to Abishola about her role in the fiasco, while Bob tries to apologize to Morenike. She says she hasn’t been able to reach her parents and she is terrified that they will never speak to her again.

Olu and Tunde decide to support Morenike no matter what. Abishola wonders what they will do about the gossip, but they say they do not turn their backs on family.

Douglas and Dele play video games when Dottie comes in the room. She tells Douglas not to mope around because he is setting a bad example. Douglas he is showing Dele what NOT to do.

As Dottie shares a drunk story, Olivia shows up to talk to Douglas. The two of them make up.

The episode ends with Tunde and Olu insisting that Morenike sits with them in church because she is family.