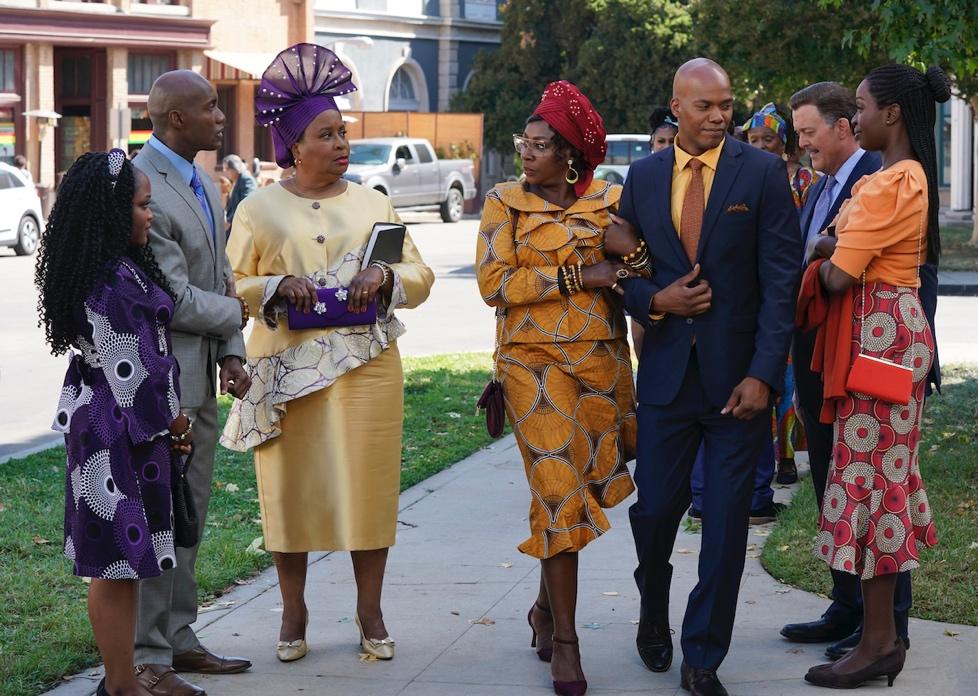 This week’s Bob Hearts Abishola opens with Kemi (Gina Yashere) asking Chukwuemeka (Tonyu Tambi) for a back massage. Ogechi (Kimberly Scott) makes a comment about being worried about the hump on her neck, leading to the three of them to bicker.

Kemi asks why Ogechi she isn’t at bible study. Ogechi says that she is working from home today.

Word gets out that Chukwuemeka and Ogechi chose a woman for him…..and it is none other than Morenike, who happens to be Abishola’s cousin.

Kemi is visibly upset, but makes a comment about Morenike that they think is false. She tells them that if it is fake, she will be struck down. Nothing happens, so she rests her case.

Douglas (Matt Jones) is working on his laptop in the breakroom when Bob (Billy Gardell) walks in. Bob tells him he is proud of his hard work, but it turns out Douglas is looking for a new company car. He asks for Bob’s advice, but is told since he is no longer management, he no longer gets a company car.

This upsets Douglas, but Bob tells him that if he gets a company car, they would need to give one to everyone. Douglas thinks that is a good idea, which earns him a slap upside the head from Bob. He yells at Bob for striking an employee.

The next day, Kemi is eating lunch with Abishola (Folake Olowfoyeku) and Gloria (Vernee Watson)while making a fake Wikipedia page for Morenike and her family. Abishola reminds her that she is a part of her family and that this is a bad idea. Gloria wants to know why she is spreading rumors on the internet. Kemi says it is why the internet was invented and she is fighting for the love of her life.

She asks Abishola for medical terms to add to the page, causing Gloria to yell at her for helping.

Goodwin (Bayo Akinfemi) and Kofo (Anthony Okungbiwa) are in the break room putting a band aid on Kofo’s finger, when Douglas walks in, asking how they survive paycheck to paycheck. Goodwin tells them they are frugal and remove all joy from their lives. They help him see this is a good thing and make him feel better. However, they admit it is nonsense once he leaves.

Tunde (Barry Shabaka Henley) , Olu (Shola Adewusi) , Morenike (Tori Danner), Chukwuemeka and Ogechi have tea together when Abishola comes over to get her mail. Tunde congratulates her on her new credit limit, while Ogechi makes plans for her, Morenike and Chuey.

Christina (Maribeth Monroe) and Dottie (Christine Ebersole) are in the car bonding when Douglas calls. He tells her she forgot to wait for him so she can drive him home, so she tells him to take an Uber. He says he cannot afford that, so he asks Goodwin if it is legal to drive the fork lift on the street. The ladies have enough and hang up on him.

Abishola and Morenike talk in the kitchen about Kemi. Morenike says that she is keeping her close and then swooping in to get her, just like she did with snakes back home.

Kemi visits Chukwuemeka at the pharmacy, armed with Clif bars and strawberry flavored lube. She makes it clear she is looking for a new lover of her own while he is with Morenike.

Bob and Abishola discuss honeymoon options. He wants to go to Greece for gyros, culture and beaches….and eating gyros in his birthday suit.

Abishola gets a text from Kemi, who is upset. Bob tells her to sit this one out and figure things out on her own, using being forced to go to a haunted house as an example.

The next day, Kemi and Douglas bond over their issues on the bus and realize they are better off with their new lives. Kemi gets off the bus and asks Douglas when he gets off. He says he gave the driver his address.

At church, Chukwuemeka, Moremike, Ogechi,Bob and Abishola meet up, with Ogechi being snarky over Kemi. Abishola asks Morenike if she has killed any snakes lately and she responds by saying she scared one away.

Kemi then arrives with her new, handsome man.

The episode ends with Dottie and Christina on the bus with Douglas. They make a scene as Douglas goes to pay. The bus driver Olivia (Edy Ganem) says not to worry about it because she saw him help the ladies. They begin to bond as he pretends he is a regular guy not related to Dottie and Christina.