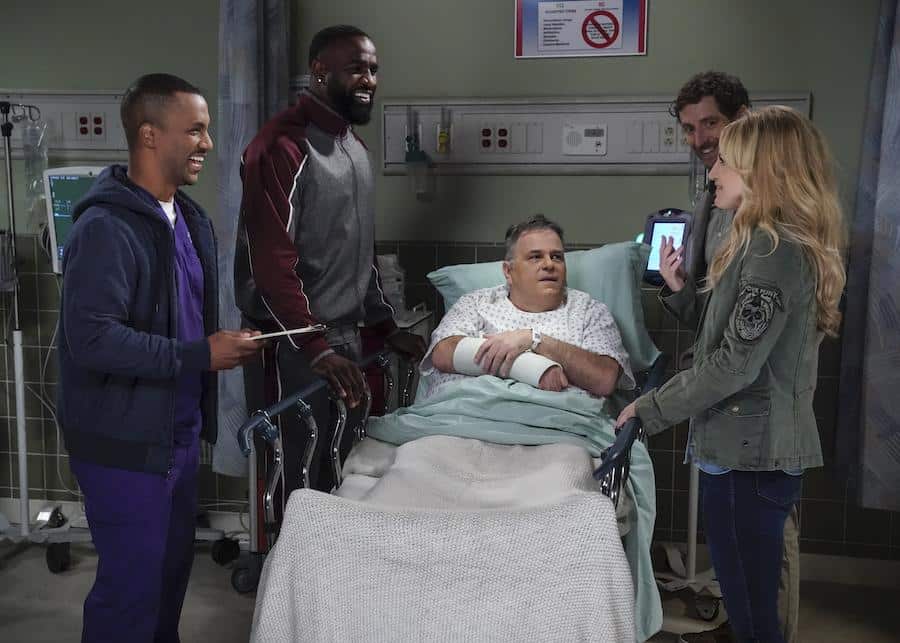 B Positive opens with Gina (Annaleigh Ashford) coming into work hung over. Spencer (Jim Beaver) tells her she looks like his daughter before rehab, while Bette (Jane Seymour) says she used to cure hangovers with cocaine.

Ms. Ludlum (Anna Maria Horsford) asks if she feels as good as she looks, while Harry (Hector Elizondo) complains about the bacon. Gina says she will talk to the chef about it when she breaks her tooth on said bacon. Harry makes a snarky comment on it while getting food with Meredith (Priscilla Lopez).

Gina goes to see Jerry (David Anthony Higgins) for her dental work and discovers she needs a crown. He tells her he will do it and brags about how he takes care of celebrities. She is impressed and lets her do the work.

Spencer, Bette, Norma (Linda Lavin) and Peter (Ben Vereen) are sitting around playing poker and talking. Spencer is worried about a colonoscopy, which leads to Norma making fun of him.

Peter tells them his granddaughter is coming to take him to lunch before she goes back to college. Bette says she is lovely and she follows her on Instagram. She also wants to know where she gets her yoga pants.

Norma reminds Peter that his granddaughter already graduated and has a new job, which leads him to be embarrassed. Spencer finds said yoga pants and votes for Bette to buy them in pink.

Jerry begins to work on Gina’s tooth, but ends up passing out. He ends up in the hospital, where he is visited by Gina, Eli (Terrence Terrell), Drew (Thomas Middleditch) and Gideon (Darryl Stephens).

He admits he is not in good health, which leads to Gina suggesting that Jerry move into the retirement home. He isn’t so sure about it, but ends up getting a tour anyway. They all think it is a good idea, but Jerry wants to leave. However, he ends up passing out again.

Drew meets Meredith and fills her and Harry in on the date he had with Gina, admitting it didn’t go so well, even though she kissed him. Meredith thinks that means something, while Harry wants to know if he can share this gossip.

At movie night, the gang discuss their favorite Bond movies and Bond Girls. Bette admits that Ursula Andress caused her to switch teams for a year, while Peter tells a story about James Bond and his cats.

Gabby introduces Jerry and puts on the movie. Spencer gives Harry a beer as they all settle in to watch.

Norma talks to Gina about getting her hip surgery. She also asks about the kiss, which Gina admits left her confused. Norma tells her she should remain single and figure out who she is for awhile, or date herself. Gina quips that she at least knows the sex will be good.

Jerry jokes and gets along with the guys, who give him beer and invite him to hang out the next day.

Peter repeats his story from before, which Bette says has been happening a lot lately. He goes back to his room and writes a post it that reads ‘she knows’ and puts it on his door, which had more post its and pictures.

Gina stops by to see Drew, where they discuss the kiss and their relationship. She tells him that she needs time on her own for awhile, which he understands. They decide to remain friends, even though he jokingly asks if she wants to make out.

After she leaves, he calls her to ask if he knows of a good dentist.

The episode ends with the guys bonding over beer and games.