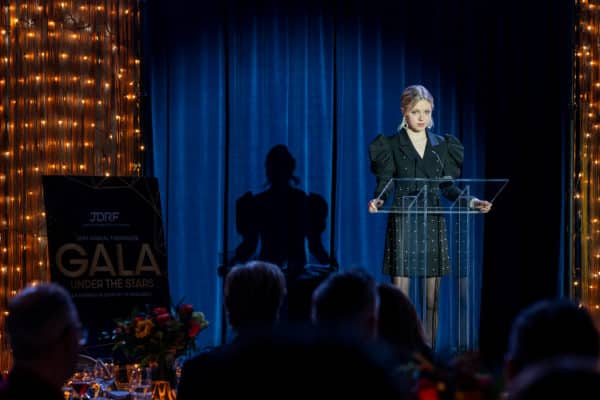 Stacey’s Emergency opens with Stacey arriving at school and talking with her friends. When class begins, her teacher compliments her work ethic and wardrobe.

As the teacher hands out tests, she looks back on her year with the BSC and dealing with her diabetes. Her doctor is very impressed with how she is handling her diabetes and invites her to a gala.

The BSC is very impressed, especially when she asks them to help with the fashion show.

While she fills them in, Kristy offers her a job with Charlotte. She says yes and then asks Claudia to help design bags. Mallory is thrilled to be a part of everything, while Jessi, Dawn and Mary Anne are proud of and impressed with her work.

Later on, Kristy and Dawn are at Dawn’s house, where they ask Liz and Sharon to help with their charity project with Stacey. They then run upstairs, while the ladies talk about how Liz and Watson want another baby. Sharon gives her a fertility statue and then goes into her relationship with Richie.

Mallory, Claudia and Stacey design bags for the charity gala. Stacey points out that Mallory spelled diabetes wrong, so they go to fix it.

Claudia is worried because Stacey is drinking so much water, but she insists she is fine. However, her app shows her blood sugar as being too high, so she goes to fix it.

Mallory is impressed with Stacey’s maturity and asks her to help her with her hair later. Stacey says yes and goes to check her sugar.

Kristy is at home trying to do her own hair when Dawn calls her about the supposed baby news. However, she tells Kristy Liz is pregnant, which causes Kristy to be hurt and confused.

The girls prepare for the gala, but Stacey still feels sick. She pretends she is okay because everyone is counting on her.

The next morning, Stacey sees her blood sugar is fine and heads to the gala.

Liz, Richie and Watson talk, while Kristy shares the baby news. Dawn thinks she may have gotten things wrong, but Kristy insists they are having a baby. She sends Dawn to distract Liz and Watson and decides to bid on a baby basket…and makes sure no one else gets to first.

Stacey, Jessi and Claudia prepare for the fashion show, while Mallory, Mary Anne and Kristy put Operation Baby Basket into action. Dawn, for her part, tries to read the fortunes of Liz, Watson and Richie, but only leaves them confused and annoyed.

Stacey knows she is sick, but keeps denying it. Jessi and Claudia are worried, but she snaps at them and insists everything is okay.

Kristy rushes over to give Liz and Watson the baby basket and congratulates them, which only leaves them even more confused.

Her dad gets upset, but her doctor calms her down and tells her what she is feeling is normal. They all do a toast with juice boxes.

Later on, Liz and Kristy have a heart to heart about the baby. Liz says she is not pregnant and there is no guarantee it could happen. That is why she kept quiet. The two of them hug it out.

At the next meeting, Claudia braids Mallory’s hair as they all worry about Stacey, who is late. She comes rushing in, apologizing for her behavior and saying that she is jealous their bodies can do what hers can’t.

Kristy asks her why she is late and she shows them her magazine cover for a diabetes publication.

The episode ends with the girls playing fashion show and dancing together…..ending up in a group hug.