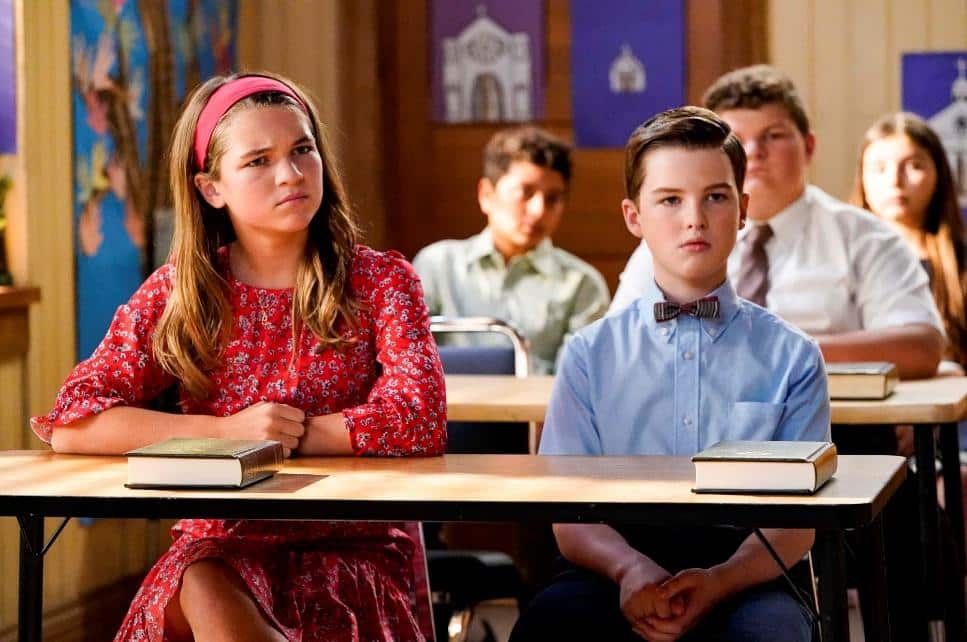 This week’s episode of Young Sheldon opens with Sheldon (Iain Armitage) and George (Lance Barber) watching 60 Minutes, while Adult Sheldon (Jim Parsons) talks about how that show is the only good thing about Sundays.

Missy (Raegan Revord), Sheldon and Billy (Wyatt McClure) are in Sunday School class, taught by Pastor Jeff (Matt Hobby). He keeps trying to teach about how God has a plan for everyone, but the trio keep questioning him.

Pastor Jeff tells Mary (Zoe Perry) and Peg (Nancy Linehan Charles) they need a new Sunday School teacher. Mary fantasizes about having a job, but Pastor Jeff tells her he already hired one of his buddies, who is a youth pastor.

MeeMaw (Annie Potts) goes shopping and runs into Brenda (Melissa Peterman). They talk about George and MeeMaw begins to get suspicious when Brenda begins acting odd.

In the car, Mary tells Sheldon and Missy about the new youth pastor, making it clear she is jealous she was not hired.

MeeMaw comes to borrow a battery from George and tells him she ran into Brenda. She says she got odd when she mentioned helping George, which, in turn, makes George uncomfortable. He just blames MeeMaw for making her uncomfortable because she has that effect on people.

George then calls Brenda to get her side of the story. Brenda just claims they were just both in the bar with other people.

Pastor Jeff asks Mary to go over questions to ask the potential youth pastors. She thinks they are softball questions and annoys him with her attitude. However, she and Peg help him interview potentials, which ends up being a disaster.

Pastor Jeff finally finds a youth pastor in Pastor Rob (Dan Byrd), who wants to make church relatable and fun for kids. Mary is not happy about it, but she talks to him and apologizes for coming on to strong.

Pastor Rob says that he is there for the kids and tries not to get too close to the parents. However, he is willing to play good cop/bad cop with her. She wonders why she is the bad cop and he asks her to ask God.

Missy is watching the Ten Commandments when Georgie comes in. He asks her why she is watching it and they end up talking about God, leaving Missy more confused than ever.

She then decides to talk to Sheldon about being an atheist and ends up selling her on it.

MeeMaw goes to the bar and begins questioning bartender Nick about what happened between George and Brenda the night of the heart attack. Nick calls George to warn her, which leads to George yelling at MeeMaw. She begins questioning him about what happened and he keeps denying it. He is upset at the accusations and she finally apologizes, saying they are good. Once he leaves she says they aren’t.

Mary tells Missy and Sheldon to go to bed because they have church in the morning, but Missy says she doesn’t think she believes in God anymore. She is very upset with both her kids and tells them they are going, like it or not!

At Sunday School, Pastor Rob is able to reach the kids by getting on their level, but ends up losing Sheldon….until he compares believing in God to science. He also is able to reach Missy by saying it is okay to question things.

Later on, both kids are excited to tell Mary about Pastor Rob, but she seems a bit unhappy with his unorthodox methods.

George and Brenda meet in the chicken coop to talk things out. Billy comes home to talk to Brenda….which leads to George hiding until he is gone.