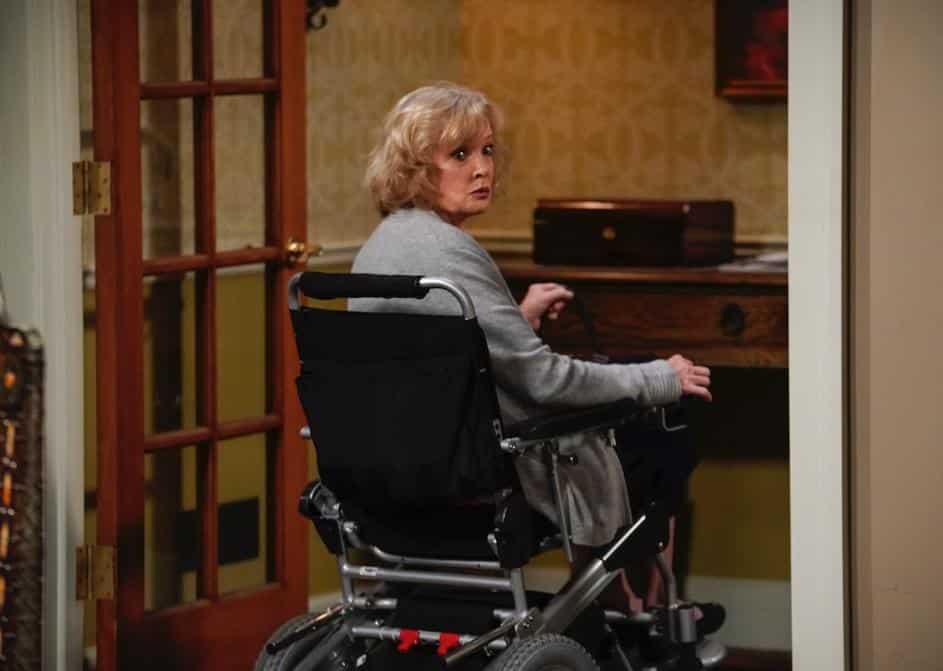 This week’s episode of Bob Hearts Abishola opens with Bob (Billy Gardell) serving Abishola (Folake Olowfoyeku) breakfast in bed. As they enjoy the meal together, Dottie (Christine Ebersole) knocks on the door, wanting to come in the room.

Dottie demands breakfast, so Bob tells her to get yogurt from the fridge. However, she wants the pancakes Bob made Abishola. He tells her they are all gone, even though Abishola offers to share.

Bob tries to talk to Abishola again, but she is silent. He then says he will slip a pancake under the door, but she thinks he is treating her like a stray dog…..but she still wants the pancake.

At work, Kemi (Gina Yashere) is complaining that her boyfriend is upset that there are things she won’t do with him. Abishola and Gloria (Vernee Watson) say she does everything with him and tells them about it.

It turns out that he wants to take swimming lessons, but she doesn’t want to ruin her hair. Gloria reminds her that she wears a wig. Kemi decides she would rather use Bob and Abishola’s hot tub.

The topic switches to Dottie and the incident from the morning. Gloria says that in America, adults who treat their kids badly go to a home, while Kemi says that adults can treat kids badly, but it the opposite happens, the parents can haunt them after death.

Kofo and Goodwin are at work. Goodwin notices Kofo (Anthony Okungbowa) taping his shirt and asks what he is doing. Kofo (Bayo Akinfemi) tells him his shirt shrunk because Goodwin’s wife washed it, which leads them getting into an argument about him living there. He wants to have a family meeting, but Goodwin refuses, leading Kofo to storm off.

Bob comes over and lets Goodwin vent, allowing them to bond over their family situations.

Dottie and Christina (Maribeth Monroe) go out. As they drive, Christina says she loves their special time together. They talk about how Christina planned on having Dottie move in, but is glad she is with Bob, because he can handle her better. She keeps talking, not realizing she hurt Dottie’s feelings.

Kofo tells Goodwin he plans on moving out, which leads to another argument and Kofo confessing he feels like an outsider. Goodwin promises to do better, so Kofo suggests a walk in bath tub, which is vetoed.

Abishola comes home to Dottie being upset that she is late. She tries to tell her that she wants to at least put her things down, but Dottie is relentless in bothering her. Abishola finally snaps at her, leading to Dottie leaving the room.

Later that night, Abishola and Bob drive to a date night. They discuss Dottie and the fight with Abishola. Bob says they should stick it to her by having fun.

Douglas (Matt Jones) is with Dottie since Bob and Abishola are out. She tries to talk to him, but he is too busy playing a game on his phone to listen to her. She decides to steal Bob’s tequila and make a run for it….straight to Tunde and Olu’s house to crash game night.

Bob and Abishola are out to dinner and enjoy being newlyweds. She even teases him about ordering a healthy meal by first asking if he is going to switch halfway through and later if he is planning on seducing her.

Dottie tries and fails at playing a game involving rocks and peanut M&Ms. Olu says she cheats better than Tunde, but she lets him get away with it because he is so cute.

Dottie then vents about how she getting old and will die alone. Tunde (Barry Shabaka Henley) and Olu (Shola Adewusi) say they are her family and give her some of the perks of getting away with things. She suddenly feels better.

Bob and Abishola come home with cheesecake for Dottie. He offers Douglas his vegetable medley, but he says no.

Abishola then runs in, saying Dottie is missing. Bob yells at Douglas, who says his game had a bad harvest. He and Abishola start making phone calls and looking for Dottie, while Douglas tries to eat the vegetable medley….which ultimately ends up in the trash.

Dottie begins getting alerts on her phone, making her feel loved…and happy her family feels guilty.

The episode ends with Dottie getting wine….and finally able to get out of her wheelchair. Douglas comes in and notices her walking. However, she wants him to keep it a secret.