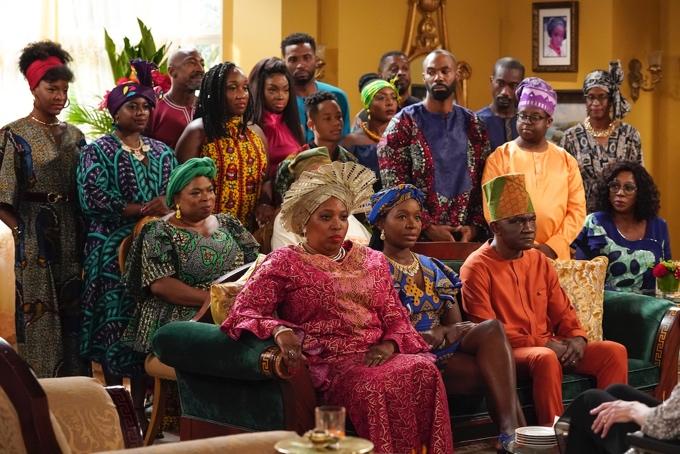 This week’s episode of Bob Heats Abishola opens with Dottie (Christine Ebersole), Kemi (Gina Yashere) and Douglas (Matt Jones) talking. Dottie is impressed with her drink, which Kemi tells her is Guinness.

Douglas is impressed with everything Nigeria has, including a KFC. Kemi asks him what he thought they had there and he says he is still learning from Black Panther.

Christina (Maribeth Monroe) wants to hit on Abishola’s cousin, but her plan is cut short because she has to help Dottie and Douglas give a speech to help Bob get welcomed into the family.

Bob (Billy Gardell) warns Dottie about the speech and tells everyone she is fresh off a stroke to lower the bar. However, it ends up being very sweet.

Ebun (Saidah Arrika Ekulona)talks about Abishola (Folake Olowfoyeku), but gets many of the details wrong to make Bob and Abishola sound better….and then takes credit for bringing them together. Olu (Shola Adewusi) snarks about how amazing it is that she was able to do that when she was the one in America.

Tunde(Barry Shabaka Henley) and Bob talk to Abishola’s dad to ask for her hand in marriage. He then gives them a list of things to get to seal the deal.

Dele (Travis Wolfe Jr.) talks to Abishola about how he will spend six months in Nigeria and six months in America. She tells him he can always come home, unless he takes drugs or fails a test.

Bob joins them and complains about the list. Abishola tells him to get everything, but Bob worries that he won’t have time to write his vows. Abishola says they won’t be saying vows, which upsets Bob.

Douglas accompanies Bob on the shopping trip, where he pays for some of the stuff. He also tastes some of the food, which he says tastes like ass.

The two of them need help, so they FaceTime with Goodwin (Bayo Akinfemi) and Kofo (Anthony Okungbowa). The two give them advice on what and where to buy things, all the while making them feel guilty for not inviting them to the wedding.

Douglas decides to play a drum, but Tunde comes by to yell and him and Bob for not buying things properly. The only thing they got right was the kola nuts, which Douglas says he purchased. Tunde tells Bob to be more like Douglas.

The ladies go dress shopping for the wedding, where Ebun and Olu get into a fight over one of the dresses. Ebun wants to wear the one Olu has and guilts Abishola into letting her wear it.

At the bridal lunch, Christina gives a toast and tells Abishola she loves her like a sister. Abishola is silent, so Christina tells her she doesn’t have to say it back.

Ebun and Olu also have things to say, but end up getting into a fight. Christina and Dottie are happy to NOT be the embarrassing family for a change.

Wedding time! After some traditional events from Abishola’s side of the family, everyone mingles. Ebun and Olu continue to snark at each other, but Olu lets things go so Ebun can have her daughter for the day. She tells Abishola she has her for all the other days.

Kemi FaceTimes Gloria (Vernee Watson) into the wedding, while Douglas FaceTimes Kofo and Goodwin, who are drinking the booze they found in Bob’s office. Douglas tells them he wishes they were there and they remind him again that they were not invited.

Christina hits on Abishola’s cousin and ends up scaring him away when she says she wants to marry him and has his babies.

Bob and Abishola dance and say their vows to each other when the power goes out. She welcomes him to Nigeria as everyone cheers. The lights come back on and they seal everything with a kiss.

The episode ends with pictures from the wedding, most of which feature a very drunk Christina.