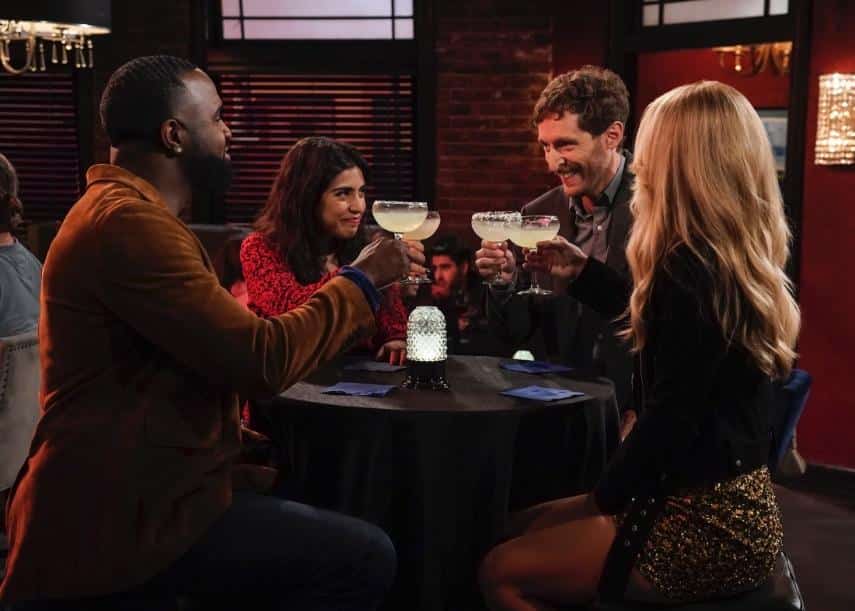 This week’s episode of B Positive opens with Drew having a heart to heart with Gideon about being in love with Gina. Gideon explains that sometimes people who get transplants develop feelings for their donors, but Drew insists this is the real deal.

As Drew continues to share his feelings, Gideon warns him to slow down before he does something he regrets.

Gina and Eli are on a weekend getaway in Vermont. The receptionist is a huge fan of Eli’s and thrilled that he is a guest. Gina is excited about all the amenities they offer, even though she wishes the room was soundproof.

Eli’s credit cards get declined, so Gina pays for the trip. She tells him she will explain later, but he is upset over this turn of events.

Drew is practicing sharing his feelings for Gina with Cannoli the dog when Adriana calls, saying she is on her way to visit. As they plan things out, Gina comes home, upset over a fight with Eli. The three of them have a back and forth until Adriana hangs up.

Gina tells him about her fight with Eli and how he feels insecure with her new wealth when he is broke. Drew jokes that he will be a diabetic if she is her sugar mama.

Later on, Drew and Adriana are enjoying their time together when she says she can come home in a couple of months if her numbers are good. She is excited to pick up where they left off, but also wants a double date with Gina and Eli. This makes Drew nervous, but she insists it will be fine.

The date starts off well, even though Drew is nervous about being there with both Adriana and Gina. As they enjoy drinks, Eli gets a call, saying his car has been repossessed. He is upset and embarrassed, which is made even worse when Gina offers to help him out. Eli storms out, with Gina following.

Adriana and Drew are surprised by this turn of events. Drew feels bad for Gina, which confuses Adriana since Eli is the one struggling.

The next day, Gina talks to Norma about everything. Norma gives her some advice, but is more interested in getting a foot massage from Gina.

Gina’s boss comes in and is surprised to see her working. Gina reminds her that this is her job even though she inherited a fortune.

The boss then asks Norma to return another patient’s Cialis. However, Norma gets sassy and says he lost it in a card game, leading to the two of them arguing.

That night, Gina is home mooning over Eli when Adriana and Drew get home from their date. Drew asks her what happened and she fills him in on everything. He asks if she wants to talk, but she declines. He goes upstairs with Adriana, who realizes Drew fell for Gina while she was away. She packs her bags and leaves.

Later on, Drew and Gina bond over their heartbreak. He tries to share his feelings for her, but she thinks he is telling her that he loves her as a friend. She tells him giving him her kidney gave her purpose in life and he says he gave her life.

The next day, Gina’s boss comes in to tell everyone there will be budget cuts and it will severely impact the lives of the residents. She doesn’t seem to care, which upsets Gina, who tells Gabby she now knows what to do with her money.

The episode ends with Gina telling Drew she is buying the nursing home. However, he cannot hear her due to using the bathroom.