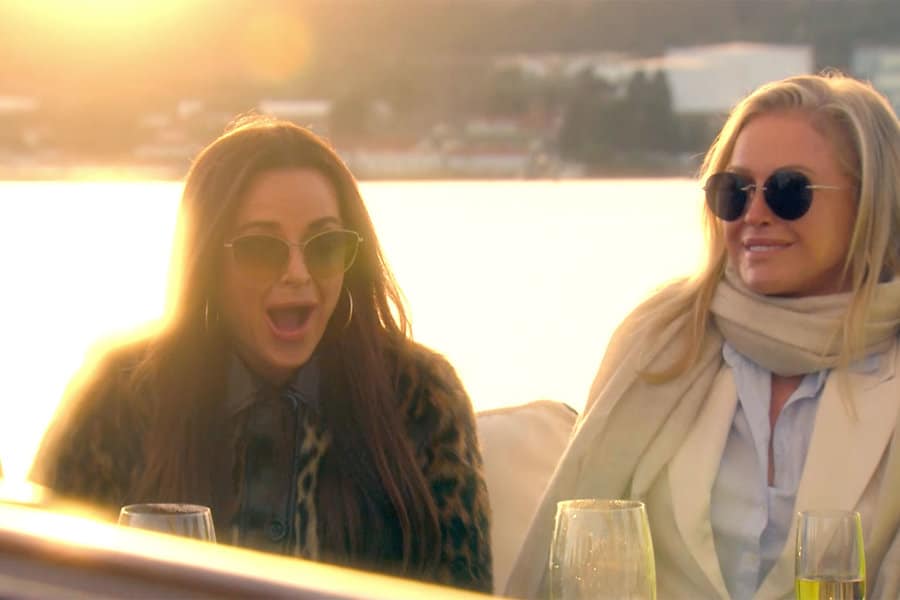 Tonight’s episode of Bravo’s The Real Housewives of Beverly Hills opens with Sutton zooming on her scooter as the ladies go to a wine tasting.

Kathy compares herself to the three bears when it comes to tasting wine, which is hilarious.

As they try each of the wines, the topic moves to Erika and how Tom had a cataract explode during the robbery. They also discuss how her son was in an accident in the snow, which confuses everyone. Nobody knows what is true or what to believe.

Crystal begins crying because the dementia talk makes her think of her father, who also suffered from the disease. She decides to buy everyone wine to honor his memory.

Later on, they prep for dinner and talk some more about the Erika fiasco. Sutton still thinks Erika is lying, while Kyle and Dorit wonder what is really going on, especially when she said everything ‘allegedly’ happened.

At dinner, Erika talks some more about the accident and her unusual relationship with her son. Apparently, her son asks her about her sex life and calls her a bleeped out name. However, he doesn’t mention her Instagram, which she says is her ‘paying the bills’ because ‘mommy’s broke.’

Everyone seems to be enjoying her antics, but Garcelle knows it is all phony.

Erika suddenly thanks Sutton for chartering the plane to see her on Broadway, which confuses Sutton. However, Erika says (to producers) that she is trying to be an adult and not ruin everyone else’s trip by being nice to Sutton.

The next morning, Sutton and Garcelle talk about Erika’s behavior from the night before. Lisa calls them to join the conversation….which Erika overhears as she is getting her hair and makeup done. She tells them she can hear them and they better not be saying anything bad about her.

Later on, Lisa and Crystal do paddleboard yoga while Garcelle and Sutton drink mimosas and watch. They both fall into the water….which is caught on video, thanks to Sutton.

Crystal announces that her birthday is the next day, so Garcelle says they should see strippers. Garcelle also wants to know if Crystal was ever with a girl….which leads to the soon to be birthday girl giving her a lap dance.

Kyle and Erika play tennis and drink champagne. Erika talks about meeting with her lawyers and claims one of them called her courageous.

The ladies go on a boat ride, where Sutton and Erika seem to make up. Sutton doesn’t trust her…..and Erika (to producers) says she actually hates Sutton.

Sutton has trouble getting on the boat, so the workers help her up. Garcelle helps her sit, while Erika makes fun of her.

Garcelle decides to change the subject by starting a game of Never Have I Ever. She says she never stole anything, which Erika finds offensive. However, she relaxes when the game turns sexual.

It all seems to be fun and games until Erika goes off for no apparent reason. Sutton seems confused by everything and wonders what is happening. She talks to Kathy about it and cries.

The episode ends with the rest of the ladies being goofy.