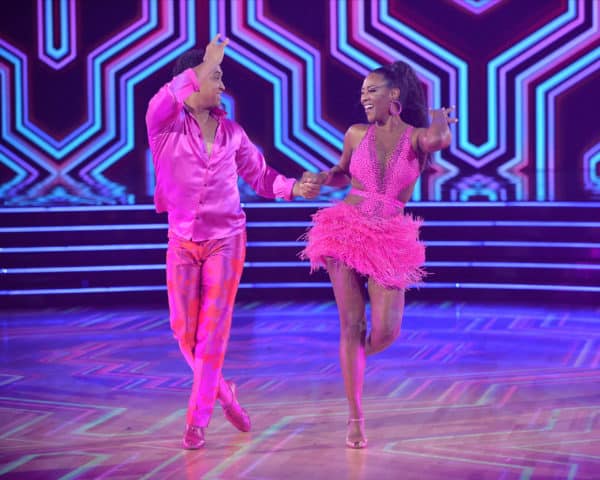 DANCING WITH THE STARS - "First Elimination" - The 15 celebrity and pro-dancer couples are back in the ballroom for a second week with the first elimination of the 2021 season, live, MONDAY, SEPT. 27 (8:00-10:00 p.m. EDT), on ABC. (ABC/Eric McCandless) BRANDON ARMSTRONG, KENYA MOORE

Tonight’s episode of ABC’s Dancing With The Stars opens with some funny moments with the cast and Len before everyone is introduced.

Before we get to dancing, we get an update on Cheryl Burke, who was diagnosed with COVID just yesterday. Her partner Cody Rigsby is also quarantining, but they are NOT out of the competition.

Claim to Fame: The Bachelor

Sammi: He took off his shirt because of course he did….it is like a rite of passage on the show. They look like they are having fun, but it is more of a club dance than an actual ballroom samba.

Len: Removing the shirt was unnecessary and he needs to work on his hips.

Derek: Work on the balance and the feet. However, he is fun to watch.

Bruno: He has so much to say, but nothing about the samba.

Carrie Ann: Keep the feet on the ground and dance bigger.

Sammi: She has beautiful lines and musicality, making her look like a natural on the dance floor. However, it seems like the dance went by way too fast.

Bruno: She is doing incredibly well for a beginner.

Carrie Ann: With performances like this, the journey won’t be short.

Len: He points out some mistakes, but he enjoyed it overall.

Sammi: Does anyone else remember Kenny Mayne doing this dance/song? I did think he was adorable, but Kenya took it to a whole new level. That sass, that attitude, those moves…WOW!

Bruno: She is simply irresistible.

Carrie Ann: She gives her places to improve, but thinks she is amazing.

Len: She has plenty of gear in the rear and did a powerful cha cha cha.

Derek: She is amazing!

Song: Nothin’ But A Good Time by Poison

Sammi: Wow, he really brought it tonight. Those moves, that power, the ATTACK! All of it made for an incredible routine.

Carrie Ann: It was amazing and what she was waiting for!

Len: There was plenty of attack and footwork, but not a lot of finesse.

Derek: It got him amped up!

Bruno: It was powerful.

Sammi: It was beautiful and romantic.

Len: It was romantic, but a lot of posing.

Derek: It was beautiful, but work on the free arm.

Bruno: It was an honest dance, but seemed a bit contemporary.

Carrie Ann: It was beautiful, but sustain the movement.

Sammi: It was so hard to focus on the dance because of the lighting and the camera work, but from what I was able to see, the passion and chemistry was hot, hot hot!

Derek: The hips were great, but work on the consistency.

Bruno: He gives her some pointers and reminds her to be consistent.

Carrie Ann: She loves the passion, but work on the lifts and turns.

Len: He doesn’t think she is going anywhere.

Song: Make Me Want To by Jimmie Allen

Sammi: It was beautiful, dreamy and classy. I teared up when seeing it because it was so touching.

Carrie Ann: She loves the respect he has for the art form.

Len: He needs to work on his feet, but he improved/

Derek: It was powerful and beautiful.

Song: It Had to Be You by Ray Chew Live!

Sammi: She just became a contender. It was beautiful, classy and showed all the right technique to make it the best of the night.

Carrie Ann: It was beautiful!

Len: He waned to to go on longer.

Derek: It was beautiful and enjoyable to watch,

Bruno: It was absolutely radiant!

Song: Rain on Me by Lady Gaga and Ariana Grande

Sammi: I cannot take the cuteness! She is full of energy and fun, making her a joy to watch. Her moves are top notch as well.

Len: It is his favorite dance of the night.

Derek: She did well, but contain the energy.

Bruno: She is brilliant!

Carrie Ann: She got lost in the performance.

Song: U Know What’s Up by Donell Jones

Sammi: Again, I feel like the dance was way too short to really enjoy. However, the dance they did show made him another dark horse for the season! He is going to be one to watch!

Carrie Ann: He has something special.

Len: He liked it!

Sammi: He is adorable and so much fun! He has that Jerry Springer likability and seems to be having a blast. His footwork and technique may be lacking, but he makes up for it with heart, soul and personality.

Bruno: He improved from last week.

Carrie Ann: He looked like he was having fun.

Len: It wasn’t great, but better.

Derek: He loves his personality and improvement.

Claim to Fame: The Office star

Song: All By Myself by Celine Dion

Sammi: It was beautiful and dreamlike. However, even though it was top notch, it once again went too quickly.

Carrie Ann: It was very dramatic and stunning.

Derek: It was easy to watch.

Bruno: It was a dramatic performance.

Sammi: They are showing their taped dance in lieu of a live performance due to the fact that Cheryl has COVID and Cody must quarantine due to being in close contact. They did well and it is obvious he is wanting to learn all the contact. I just hope she gets well soon!

Derek: It was great for a rehearsal.

Bruno: There were some issues, but overall, they did well.

Carrie Ann: It had lots of content, but not fantastic.

Song: Here Comes The Sun by the Beatles

Sammi: Every time I hear this song I think of when my sister and her class sang this in kindergarten as raindrops that became flowers. The dance was beautiful, stunning and had effortless frame and technique.

Derek: He gives her some pointers, but loved it.

Bruno: It was clean and lovely.

Carrie Ann: It was elegant and refined.

Len : He also enjoyed it.

Song: I Like It by Cardi B, Bad Bunny and J Balvin

Sammi:That was the perfect way to end the night. I loved that flip, the chemistry, the sass and attitude….it all came together in one awesome package.

Bruno: He advises her to become the character.

Carrie Ann: She loves how she is beginning to embrace herself.

Len: She did much better this week.

Derek: He was impressed by the flip in 3 inch heels.

RESULTS!!! Iman and Daniella,Amanda and Alan, Suni and Sasha, Cheryl and Cody and Matt and Lindsay are all safe.

JoJo and Jenna, Jimmie and Emma, Mel C and Glen and Olivia and Val are also safe.

The Miz and Witney, Brian and Sharna and Kenya and Brandon are all safe.

Martin and Britt and Christine and Pasha are in the bottom two. The judges will now vote on who to keep. In the case of a tie, Len will make the final decision.

Martin and Britt are going home.