Tonight’s episode of CBS’s Big Brother 23 picks up where we left off after the second eviction. Hannah is gone, Azah is the only woman in the house and the last three men standing are Xavier, Big D and Kyland.

We get some flashbacks of stuff that happened, including how Kyland and Azah lied to Hannah about keeping her safe and how Big D felt betrayed by Kyland’s veto stunt.

Big D was  also mad because he was not a part of the veto plan and felt as if the guys were more loyal to each other than they were to him. Things only get worse when there is talk about saving Hannah.

Azah, for her part, feels as if she got played when Xavier was taken off the block.

Later on, Xavier and Kyland solidify their final two plan. However, Xavier really wants to bring Big D into the final two and is only telling Kyland what he wants to hear and to keep himself safe. He then goes and does the same thing to Big D.

HOH time! It is a CSI themed game where they have to find clues and evidence as to who stole the HOH key. The person who does it the fastest wins HOH.

Xavier is thrilled, but Big D and Kyland are mad that they lost. Big D is tired of losing, while Kyland knows there is a chance he will not make it to the final three.

Kyland talks to Xavier, who again tells him what he wants to hear, even though he plans on  bringing Big D to the final two.

Azah then talks to Xavier, who won’t give her a straight answer on whether or not he has a final two with Kyland. Now she is upset and worries that she will be on the block.

Xavier then talks to Big D about their final two plan. He makes it seem as if they should get rid of Kyland, which will leave Big D holding the bag and Xavier guaranteed Kyland’s jury vote.

Nomination time! Kyland and Azah are on the block. The plan is to keep the nominations the same if Xavier wins so Kyland goes home and Big D is left making the final decision. 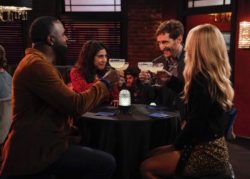