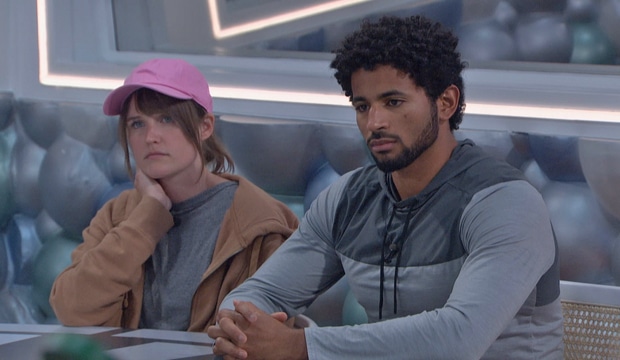 Tonight’s episode of CBS’s Big Brother 23 opens with the aftermath of Claire’s HOH win and her keeping Kyland and Sarah Beth on the block. Nobody knows for sure she is HOH, but most people, especially Tiffany have a pretty good idea.

Later on, Claire tells Hannah and Tiffany she is HOH. Tiffany tells her to tell the house Tiffany dethroned herself so Claire doesn’t become a target. However, Tiffany only wants to do this so nobody gives Claire any ideas on what to do.

Sarah Beth whines over being on the block. Kyland tried to be sympathetic, but knows that he can’t be completely honest, either.

POV comp time. The only ones NOT playing are Azah, Big D and Tiffany play. Ben Platt from Dear Evan Hansen is there to host and says that the winner will get an advanced screening of the movie with three houseguests of their choice.

The competition has them put pictures of evicted houseguests in school in chronological order.

Hannah wins, with Sarah Beth close on her heels…..which leads to more tears.

Later on, Hannah chooses Sarah Beth, Kyland and Xavier to watch the movie. This upsets Big D because he is dying to see the movie.

As they screen the movie, Kyland tries to convince Claire to take him off the block. Claire then reports this news to

Tiffany, who gets upset. She wants him on the block with Sarah Beth.

Kyland also tries to convince Hannah he deserves to stay, but she refuses to use the veto on him. She then uses it on Xavier, which means he or Sarah Beth will go to jury tomorrow. Stay tuned.