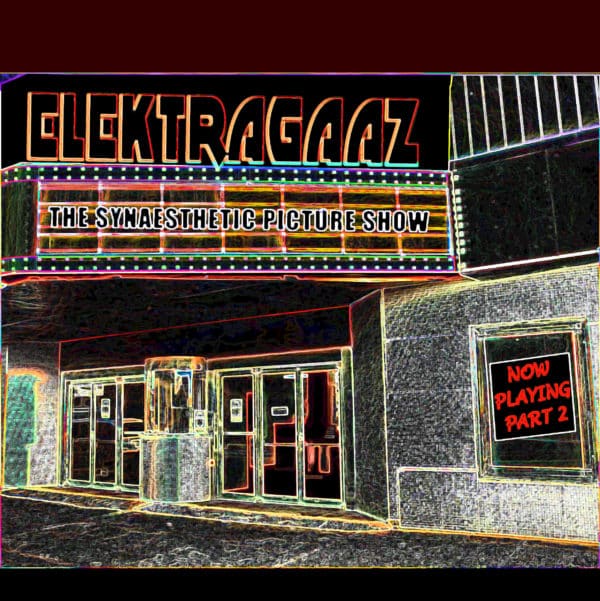 We recently caught up with core members of the exciting new band Elektragaaz and their producer Trebor “Big T” Lloyd. Elektragazz features both electronica and “live” instruments”in an instrumental and cinematic highly colorful and combustible mix. The band has just released their second EP, The Synaesthetic Picture Show Now Playing Part 2. The songs are based on compositions written by a reclusive and mysterious young Danish/Frisian composer creating under the pseudonym of Poppo Redband who for apparently deeply personal and intensely private reasons never appears in public and never makes public comment However the band was very happy to talk about the Elektragaaz project and their work on it.

PLEASE DISCUSS THE NEW RECORD, HOW IT WAS MADE AND WHO WAS INVOLVED

The new record was created during the pandemic period, not in a single studio but by the musicians creating work in their home studios, building upon Redband’s core electronic contributions. This resulted in a very creative, experimental vibe. The materials were then arranged by Big T. The songs were subsequently mixed in part at Engine Room Audio and in part at Rad Hazard studios. All of the musicians below worked on the songs and there were also outstanding contributions by Mike “Steel Mike” Nolan, Michael Suke Cerulo, Jake Chapman and Luisa Bastidas among others. World class mastering was done at Engine Room Audio by Mark Christensen. Elektragaaz is on AIS Records and is distributed by The Orchard.

TELL US THE STORY BEHIND “THE LITTLE DANCER MAKES HER GETAWAY”.

Redband privately told Big T that in composing “Little Dancer,” he “saw” a story of a young woman surrounded by oppressive males forces. The young woman dances her way out of their control to freedom. Currently, Elektragaaz plans to release a video of “”Little Dancer” this summer, featuring the exciting young dancer Laura Aronoff, who earlier appeared in a video of “Cabin Fever, ” a song from the first EP release.

TELL US THE STORY BEHIND “SISTER SANGFROID”.

“Sister Sangfroid” is an affectionate electronic salute by Redband to Two-tone or 2 tone music, a genre of British popular music of the late 1970s and early 1980s that fused traditional Jamaican ska music with elements of punk rock.

WHEN DID YOU GET INVOLVED IN ELEKTRAGAAZ? DO YOU HAVE A FAVORITE SONG(S) FROM THE TWO RELEASED EPS?

Kathy Sheppard aka Kathy Kaos: I got involved at the inception of Elektragaaz, about 4 years ago. Two of my favorites are “Spanish Moss and Mysteries” and “Achilles Back from the Dead” from “Part 2”.

Mathew Muntz aka Mat Thunder: I joined the band in Fall 2018. While each track calls on unique and interesting challenges, I’m especially proud of my contributions to Phil Gumms Progress (Part 1) and Reflections in a Funkhouse Mirror (Part 2).

Jasper Shogo Dutz aka Jas Windstorm: I first got involved in Elektragaaz in late 2018 nearly 3 years ago! A lot of my favorite contributions have yet to be released but I will say “Dancing With The Queen Of Hearts” from “Part 1” particularly was a fun one.

Kate Amrine aka Kosmic Kate: I first got involved in 2019. Sister Sangfroid is my fav!

Tom McCaffrey aka Tom Elektron: I got involved in Elektragaaz a little over a year ago. The pandemic was in its full swing at that point, and this came along at a great time to keep me busy (and sane!) I think my favorite songs from the first two releases are “Cabin Fever” and “Spanish Moss and Mysteries,” because I think they have a really focused quality in which they narrow in on a very specific emotion and setting. It doesn’t do it justice to put into words, but those two make me imagine growing vines in an old abandoned building in a vast jungle.

Josh Henderson aka Josh Firebow: I got Involved right before last Summer, perfect time to begin something new. Favorite song would be Dancing with the Queen of Hearts (Part 1).

How would you describe Elektragaaz’s music? Anything you want to say about Elektragaaz, why you enjoying working on it?

Kathy: The music speaks for itself.

Mathew: The music has a joyful maximalism that I feel is rare – the willingness to draw on a huge range of influences and to treat them with equal value reminds me of the “polystylistic” approach of Alfred Schnittke, one of my own favorite composers. I enjoy recording for Elektragaaz because I never feel limited in my self-expression when constructing the bass parts.

Jasper: The music can only be described as vastly eclectic and densely unique in both texture and rhythm. There’s very few things it can accurately be compared to. One of my favorite parts of the project is the sense of “magic and mystery” each track gives the listener.

Kate: It is eclectic and texturally always interesting. I love how every song sounds different and I never know what to expect.

Tom: I’d describe Elektragaaz as a setting or wallpaper instead of as songs. It makes you feel like you’re in a different place. The colors that I see usually are a different color depending on what track I’m working on or listening to. Everything feels a little bit off, and I think it helps bring out your childlike imagination if you let it. When I work on Elektragaaz music, I sit and listen to the track and let whatever imagination hold my hand all the way through. I try not to second guess any decision I make and tend to work fairly quickly. I think that if I got hung up on too many parts my contributions would start to lack a playful quality.

Josh: Music of the future!

Are there musical influences of yours that came into play when you worked on Elektragaaz? Which artists?

Kathy: Mainly, my musical influences are classical, although I often utilize world music ideas for my contributions.

Mathew: The most immediate and generally applicable influence on my playing with Elektragaaz is the bass playing of Jamaaladeen Tacuma, particularly his work as a part of Ornette Coleman’s Prime Time ensemble. Tacuma pioneered a style of bass playing ideal for the kind of maximalist, unpredictable sonic space shared by Prime Time and Elektragaaz. However, due to the wide range of styles present in the Elektragaaz catalog, I find myself drawing on everything from J.S. Bach to Swedish death metal.

Jasper: I honestly have had to pull from many influences ranging from John Coltrane to J.S. Bach with even a bit of Bjork sprinkled in.

Kate: I think a lot about improvisation when I am with this project – whether in a jazz context or jam band sort of style. I honestly hadn’t pictured any other artists though. Just me 🙂

Tom: Sure, I think my musical and guitar heroes are always standing on my shoulder and whispering to me no matter what music I’m working on. Frank Zappa, Jeff Beck, Johnny Greenwood (from Radiohead), Nels Cline, Nir Felder, Mark Ribot, Allan Holdsworth, Steve Howe, Robert Fripp. The list goes on. They all influence me in one way or another.

Josh: Influenced a bunch by “Classic” Rock guitarists such as Brian May, and David Gilmour.

In general, who are your favorite artists? Any you’d like to collaborate with?

Kathy: My favorite artists tend to be from the progressive rock and jazz fusion genres. It would be amazing to collaborate with my teacher, Adam Holzman!

Jasper: I’m very fortunate in that most of my favorite musicians are my colleagues. Many of whom are in Jazz specifically but other genres as well (as I referenced Bjork above). I’d love to collaborate with so many people but one that comes to mind is Charlie Rosen and the 8bit big band.

Tom: I think the list of my musical influences above covers a lot of my favorite artists, but in addition a few more are bands like Guerilla Toss, Palm, Black Midi, Parliament/Funkadelic, Spirit Of The Beehive, Meshelle NDegeocello, Blonde Redhead, CAN – the list could go on forever. I wish I could collaborate with all of them!

Josh: Favorite artists would be Jack White and Gil Shaham.

What kind of projects are you involved in outside of Elektragaaz?

Mathew: My current focus is a collaborative experimental/world music ensemble called The Vex Collection, with whom I’ll be releasing an album in early 2022. The band features Korean shamanic woodwinds, Scottish and Balkan bagpipes, and newly constructed microtonal reed instruments in a dizzying mix of traditional, contemporary, and futuristic musical forms.

Jasper: Aside from regular sideman work and teaching, I am a full time member of the 7 time grammy award winning Afro Latin Jazz Orchestra under the direction of Arturo O’Farrill. I also co-lead a Jazz Trio with two of my best friends that specializes in music inspired by the Lord of the Rings and lore of other various fictitious universes.

Kate: I freelance throughout NYC so usually lots of gigs with a bunch of different groups. As a soloist I recently commissioned a bunch of pieces inspired by climate change so

I have 3 shows this summer (1 in each borough) with those premiering. Check out my Instagram @katetrumpet or website www.kateamrine.com to stay in the loop.

Tom: I’m in a band called Civilians, a six-piece band that’s I guess something like a modern Zappa type of sound. We have a new record coming out this year that I think is one of the best thing I’ve worked on so far. I produced and mixed the album so it was a big labor of love that’s been in the works for somewhere between 2 and 3 years. Also, I play in a duo band called Mountain Girl with drummer Matt Zebroski (of Alex Skolnik Trio.) and have a musical called “All The Bugs Are Huge!!!” I also run a recording studio called Rad Hazard in Brooklyn and have been recording a lot of great up and coming artists like Lanier, Mike Messer, Brother Joscephus, and many more!

Josh: I play in the group Warp Trio.

What are your favorite TV shows right now?

Mathew: I’m in Europe right now so all I watch is soccer.

Kate: I recently have really been digging Handmaid’s Tale and Cruel Summer.

Tom: I love “Twin Peaks,” and I’m watching “The Sopranos” for the second time now. It’s great. I also love “I Think You Should Leave With Tim Robinson,” and have been watching a lot of “Seinfeld” lately. A lot of people can’t get past its corniness to realize how funny it is. I have a contrast of really serious, invested shows and really easy to watch, dumb shows when I need to take my mind off of whatever!

Josh: Very much enjoyed, “Them”

Where can people hear your music?

Elektrgaaz’s digital releases are available on all major download and streaming platforms. 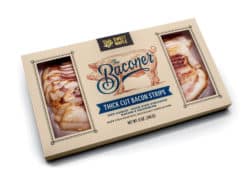