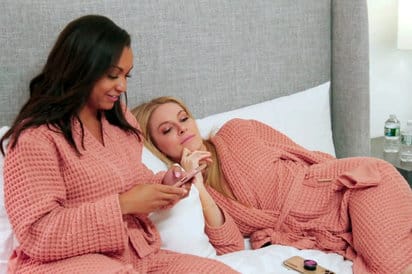 Tonight’s episode of Bravo’s The Real Housewives of New York City opens where we left off last week. Eboni is kicked out of LuAnn’s house and goes back to Ramona’s where she fills Leah on on what happened.

LuAnn talks to the other women about the fight. They offer her advice on how to handle things and we get a back and forth on their talk and the talk between Eboni and Leah.

When everyone else gets back to Ramona’s, Heather talks to Eboni and Leah about the incident. She seems to think she has good intentions, but she only makes Eboni uncomfortable.

Ramona wants everyone to cook and gives them all funky aprons. Hers is a bikini body, which Sonja says looks like her. Everyone goes to get drinks as they prepare to cook.

While they sit in the living room, Eboni explains why she was upset about LuAnn’s words and how being called angry triggered her, since that is a major stereotype.

LuAnn says that she was also upset and thinks she is also owed an apology due to Eboni’s role in the fight. This leads to them talking about how to handle things going forward.

LuAnn and Eboni hug it out, while Sonja tries to show that she is using this as a learning experience, which Eboni seems to appreciate.

The next day, Ramona and Sonja talk about how they want to educate themselves due to what they have learned from Eboni.

As everyone goes to get ready to go fishing, Eboni calls a friend to help her find Sonja a man.

As an aside, they all look like they are ready for a trip to the mall, not to go fishing. Also, why does LuAnn have batons? Is she going to cheer for the fish to bite the worm?

Leah and LuAnn decide to watch the other women fish (while hula hooping?) with someone named Mark. Sonja seems to hit it off with him, which the other girls find hilarious.

Ramona drinks wine at the shore. As you do on a fishing trip. At least, that is the only way to get me to go fishing.

Eboni talks to the other women and all seems right with the group…..for now.

The ladies eat lunch and talk about showcasing their talents later on that night. Ramona says she has no talents except cooking and making money.

Eboni invites everyone to watch the election results, which of course leads to a tiff between Leah and Heather because Leah is disgusted with both sides.

Later on that night, the ladies get ready for their pageant when Leah gets a call that her grandma is now unresponsive. She is upset that she will never be able to talk to her again and plans to leave the next day to see her.

When she gets off the phone, she talks to Eboni about it and how Heather is so nasty to her and the things she said to her when they got home.

Leah goes to tell Heather off and to mind her own business. She accuses her of being a Karen and she needs to eff off. This, of course, leads to another fight and tension between everyone else. It gets to the point where Leah throws flowers at Heather in the car and storms off. She says she is going to go see her grandmother.