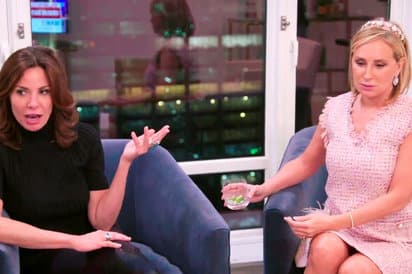 Tonight’s episode of The Real Housewives of New York on Bravo opens with the New York Beauty Pageant. This was the event the ladies were preparing for last week and resulted in Leah fighting with Heather and storming off.

However, despite the drama, Leah decides to show up to the event and compete. Each woman does her talent before the winners are announced.

Eboni and LuAnn joke about the competition being rigged, but are honestly happy for Leah.

The next morning, Leah leaves to go see her grandma. Sadly, she finds out her grandma died when she got back. LuAnn and Ramona text her, but LuAnn comments on how Ramona sends the message, saying there is a reason she is not her emergency contact.

At breakfast, Eboni and Heather join the ladies and they discuss Leah’s text. They talk about her memories and how Eboni can relate to her due to her own grandma being sick. She also talks about how it has been just her and her mom for most of her life and how she never knew her dad. However, someone reached out via Instagram, claiming to be her sister, leaving her confused.

The topic switches to Heather calling Eboni articulate the night before and how Eboni considered it a trigger. Heather understands and they seem to work things out.

Everyone gets back to their lives after the trip. Eboni, Sonja and LuAnn work, while Leah and her sister discuss their grandmother.

Ramona, for her part, meets with her real estate broker Michael, who she met via Sonja. She is looking to go into the field, so she is getting his advice on how to get started. He decides to get her feet wet by getting her into some open houses.

Later on, Leah goes to her boxing class with Martin, Eboni and Sonja. Everyone gives her condolences before doing a class. Sonja is uncomfortable, but then ends up seriously beating on Martin.

Election night! Eboni hosts a party, where people show up dressed as JFK and drink wine while watching the results. Sonja shows up dressed as a princess and…flashes her panties? All righty then!

Everyone goes to eat FILET (not sirloin like Sonja thought) and other delicious goodies. Leah keeps trying to feed Eboni’s dog, which Eboni does not like.

Ramona, who is not present, video chats the women and says she will be at the Harlem event Eboni is hosting the next day. The others talk about her after they hang up because, well, that is what true friends do?

Sonja then goes on a rant for no apparent reason, causing LuAnn to leave. Everyone else slowly begins to follow suit….including Sonja herself, who leaves with some lobster meat.