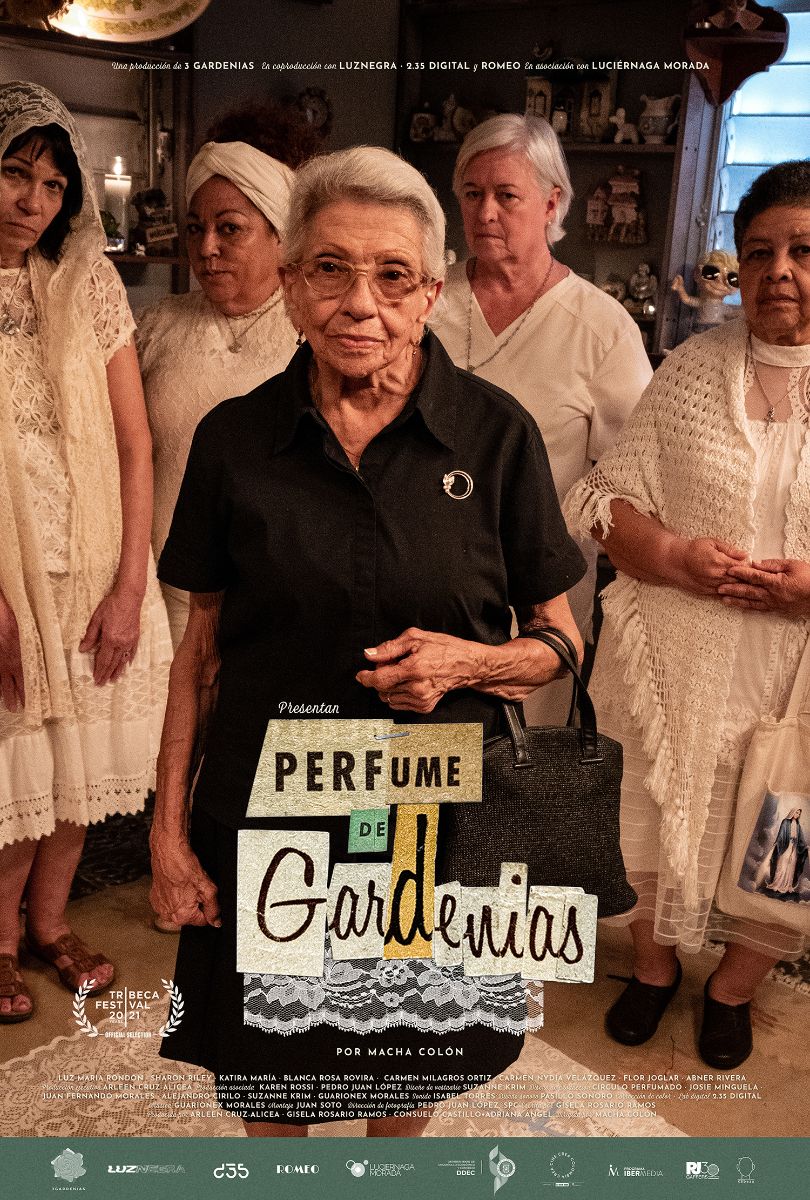 Perfume de Gardenias, the debut film from the renowned queer Afro-Puerto Rican singer, multi-disciplinary artist, and filmmaker Macha Colón, is set to have its world premiere at the 2021 edition of the Tribeca Film Festival, taking place June 9 to 20.

A dark comedy that captures the idiosyncrasies and spirit of a nation adept at creating novel strategies for laughter in the face of adversity, the film tells the story of Isabel—played by veteran theater and television actress Luz María Rondón in her first movie-starring role—an elderly woman living in a middle-class neighborhood in Puerto Rico, who has just become a widow after having cared for her husband until his last breaths. However, her recent loss becomes a blessing when she crafts a beautiful custom-made funeral for him that catches the attention of Toña (Sharon Riley), a pious but domineering woman who involves herself in local funerals.

Toña is the self-appointed leader of a coterie of church ladies elderly, and she enlists Isabel to put her unusual talents to good use and design custom, idiosyncratic funerals for her ailing neighbors. As Isabel agrees to perform this peculiar line of work—offering seniors a chance to dictate how their lives should be honored, before they die—she also finds renewed purpose in her own life. Along the way, however, Isabel is forced to question her own beliefs, as well as her relationship with both life and death.

In line with Colón’s collaborative artistic spirit, Perfume de Gardenias is likewise a work that brings together her creative community with many cross-generational figures from Puerto Rico’s local arts and cultural circles featuring in the film. Part of a broader body of work that includes productions across the disciplines of music, performance art, and political activism, Perfume de Gardenias brings the daring, cheerful, and radically “cuir” style that characterizes Macha Colón’s artistic output to the silver screen.

A Puerto Rican film at its core, made in co-production with Colombia’s 2.35 Digital and Romeo, Perfume de Gardenias manages to capture the vivid colors of the Caribbean island by offering a nuanced portrait of the customs, characters, and idiosyncrasies of its battered middle class. Colón’s gaze is as authentic as it is original as she dares to poke fun at the sacred and profound in a deeply Catholic culture; humor that, in the end, helps to broaden our understanding of death, mourning, and the meaning of life itself.