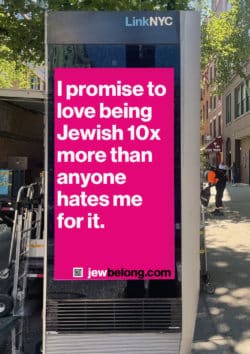 JewBelong.com, known for their witty humor and thought-provoking advertising campaigns, was created to welcome and inspire Jewish people (and those who love them) who find themselves disengaged from Judaism, whether they drifted away from the religion, or simply never got much of a Jewish education. JewBelong’s co-founders, Archie Gottesman and Stacy Stuart, are the marketing duo that was the voice behind Manhattan Mini Storage’s iconic branding (“NYC: Tolerant of Your Beliefs. Judgmental About Your Shoes.” “If You Don’t Like Gay Marriage, Don’t Get Gay Married”).  The campaign makes a powerful statement about the rise of antisemitism in the U.S. JewBelong is proud that their name has included the word belong since their inception. JewBelong balances tradition with inclusion by highlighting the love and values at the core of the religion. It starts with 750 somewhat tongue in cheek digital ads running across Manhattan that say, “Here’s an idea: Let’s ask everyone who’s wondering if antisemitism is real to wear a yarmulke for a week and then report back.” The campaign breaks officially Now, and will run through at least July, beginning with LINK digital ads, and then adding billboards and print posters in high traffic locations such as PATH Trains and Times Square. The campaign will also run in Chicago, Philadelphia, LA and other cities with other messages.

TV Grapevine: Now more than ever, diversity and inclusion are on the tip of everyone’s tongue. What are the pressing issues you are seeing in America?

The most pressing issues we see are the lack of acceptance, peace, and forgiveness these days. People spend so much time looking for what separates them, rather than coming together with shared humanity and looking for what binds us. As an example, the Jewish community itself is incredibly diverse. In fact, sometimes Judaism can seem intimidating to Jewish people because of the many rules and complex traditions. JewBelong.com helps by explaining the intention behind the rituals and invites everyone in, whether they break the rules, follow the rules, or even know the rules! JewBelong is able to balance tradition with inclusion by highlighting love and humanity. We’re proud of the fact that our name has included the word belong since our inception because truly, JewBelong exists for everyone – Jewish or not. Love and acceptance are not a zero-sum game. One group does not need to lose to have another group win. Americans of different backgrounds can be allies and the world would benefit from that.

TV Grapevine: You are known as marketing geniuses. Tell us about your background and what led to the launch of JewBelong.

Wow! Thanks! We were the voice behind Manhattan Mini Storage’s iconic branding (“NYC: Tolerant of Your Beliefs. Judgmental About Your Shoes.” “If You Don’t Like Gay Marriage, Don’t Get Gay Married”) for almost 20 years. Around that time, Archie was speaking with a rabbi who she had great admiration for, and he said, “Judaism is a great product, but the marketing sucks.’” That was when we had a lightbulb moment and decided to take on the challenge of rebranding Judaism. We each come to JewBelong through personal stories too. Archie’s husband, Gary, grew up United Methodist and converted to Judaism before he and Archie got married. Seeing Judaism through Gary’s eyes, (a rookie to Judaism) was so helpful to Archie. What she saw was not as loving as what she knew the religion could be. Stacy grew up as a disengaged Jew, (at JewBelong we call them DJs). She did not have a Bat Mitzvah and had very little Jewish education growing up. This gives Stacy a razor-sharp antenna when things are going to JewBarrass our audience. That is JewBelong speak for being too Jewish and intimidating. That is when we know we need to back up with some helpful explanations and a bit of humor.

TV Grapevine: Your digital ads are running across Manhattan. One says, “Here’s an idea: Let’s ask everyone who’s wondering if antisemitism is real to wear a yarmulke for a week and then report back.” You will be adding billboards and print posters in high-traffic locations such as PATH Trains and Times Square and expanding to LA, Chicago, and Philly.  What is your goal?

With antisemitism on the rise throughout the U.S. and around the world, and the overwhelming amount of hate and misinformation, particularly on social media, we knew we needed to join the fight against antisemitism too. Our goal is to elevate awareness about the rampant recent antisemitism and to encourage dialogue, support, and community awareness. www.jewbelong.com 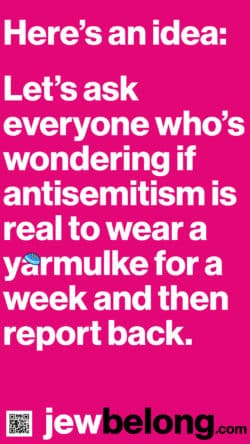 As a country, we want to do the right thing, including creating a place where people can safely be themselves and practice what they want with regard to religion, sexuality, etc. The recent support for marginalized communities, including BLM and Stop Asian Hate are just examples of people taking a stand. We need more of this. As for what we are getting wrong, as we said earlier, too much time is spent by people looking for what separates them, rather than coming together with shared humanity and looking for what binds us. We hope Jewbelong can unite people and help people find a community to express their views.

TV Grapevine: Tell us about the jewbelong campaign and resources offered on your site.

We always meet current events head on, and we try to amplify the voices of other people doing the same. As an example, as part of the battle against antisemitism, we recently announced the Jewish Partisan Prizes to recognize influencers who are standing up against antisemitism on Instagram and other social media platforms. The prizes promote and reward defenders of the Jewish community and those who speak out against prejudice with courage and resilience. So far, we have awarded the $360 prize to the 23 young peace warriors and will announce more winners in the coming weeks. As for what you’ll find at JewBelong, we’ve got education, DIY rituals, and holiday and life cycle booklets. We also shine a light on Jewbarrassment, that feeling most of us have had when we think we’ve said or done something wrong relative to a Jewish rule or custom. Our goal is to decrease that feeling by encouraging people to be more open and not hide their vulnerability. Judaism should be fun and inclusive, and not chock full of worry about getting something wrong. 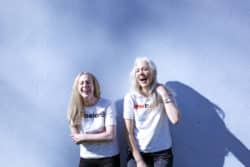 TV Grapevine: What is the Call to Action you are looking to elicit from people?

The call to action is really to wake up to the increase in antisemitism so that we can work together to stop hate and violence in its tracks. To join www.jewbelong.com in helping to create awareness, join our community and support those efforts.

TV Grapevine: How are people reacting to your message? How can we join forces?

The campaign is off to a great start! In just the past eight days since the ads launched (we’ve served over 4,000,000 impressions on digital signs across NYC), we’ve seen A 50% increase in traffic to JewBelong.com in the NYC area, including an increase in traffic to the antisemitism page week over week. We’ve received countless notes of thanks from people all over the world who appreciate that we are taking a stand against hate. And we’d love to join forces by having you help us spread the word! We may be naïve, but we really think that most people want healing and peace, and we hope to be an impetus for that to happen.

Join us at www.jewbelong.com and follow us on our social media channels on

About JewBelong: JewBelong.com is a non-profit online resource that offers easy explanations and meaningful DIY rituals for Jews, for people who are not Jewish and for anyone who has felt like a Jewish outsider or feels disengaged from the religion. Because of the current climate, they are now using JewBelong’s platform in the fight against antisemitism. 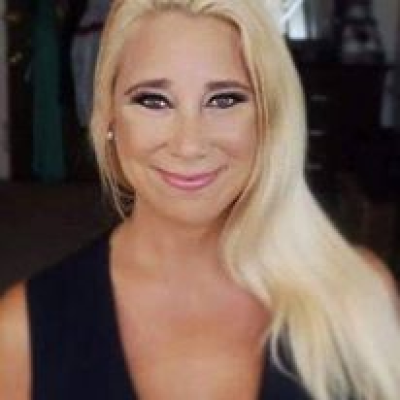 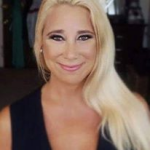