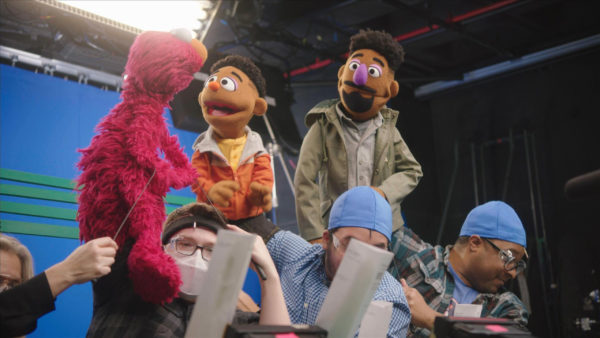 What to Watch: Sesame Street 50 Years of Sunny Days

Need a family friendly show to watch tonight? Look no further than Sesame Street: 50 Years of Sunny Days! Check out the previews below! The special airs tonight at 8pm on ABC.

he first lady of the United States Dr. Jill Biden, UNHCR Special Envoy Angelina Jolie, CNN’s Dr. Sanjay Gupta, John Oliver and Rosie Perez join the incredible lineup of special guests for the two-hour documentary “Sesame Street: 50 Years of Sunny Days,” a special produced by TIME Studios airing MONDAY, APRIL 26 (8:00-10:00 p.m. EDT), on ABC. Stevie Wonder, known for his iconic performances of “123 Sesame Street” and “Superstition” on the beloved series, will perform his re-imagined version of “Sesame Street” classic “Sunny Days” for the documentary. The special can be viewed the next day on demand and on Hulu.

The documentary, which highlights the more than 50-year impact of this iconic show and the nonprofit behind it, Sesame Workshop, will also include never-before-seen footage of an episode produced in 1992 focusing on the topic of divorce and around the experience of Mr. Snuffleupagus and his family. The special will examine the decision to ultimately not air the episode, marking the only time in the show’s history such a decision was made.

“Sesame Street: 50 Years of Sunny Days” reflects upon the efforts that have earned “Sesame Street” unparalleled respect and qualification around the globe, including addressing their responsibility to social issues that have historically been seen as taboo such as racial injustice. This special, as originally announced by ABC in March, also chronicles the creation and introduction of a Black family of “Sesame Street” Muppets, Wes and Elijah Walker, a father-and-son duo who are at the heart of Sesame Workshop’s new racial justice initiative Coming Together. Previously announced special guests include W. Kamau Bell, Gloria Estefan, Dr. Anthony Fauci, Whoopi Goldberg, Christopher Jackson, John Legend, Lucy Liu, Olivia Munn, Questlove, Chrissy Teigen and Usher.

For TIME Studios, the production is directed by Rebecca Gitlitz and executive produced by Alexa Conway and Ian Orefice.