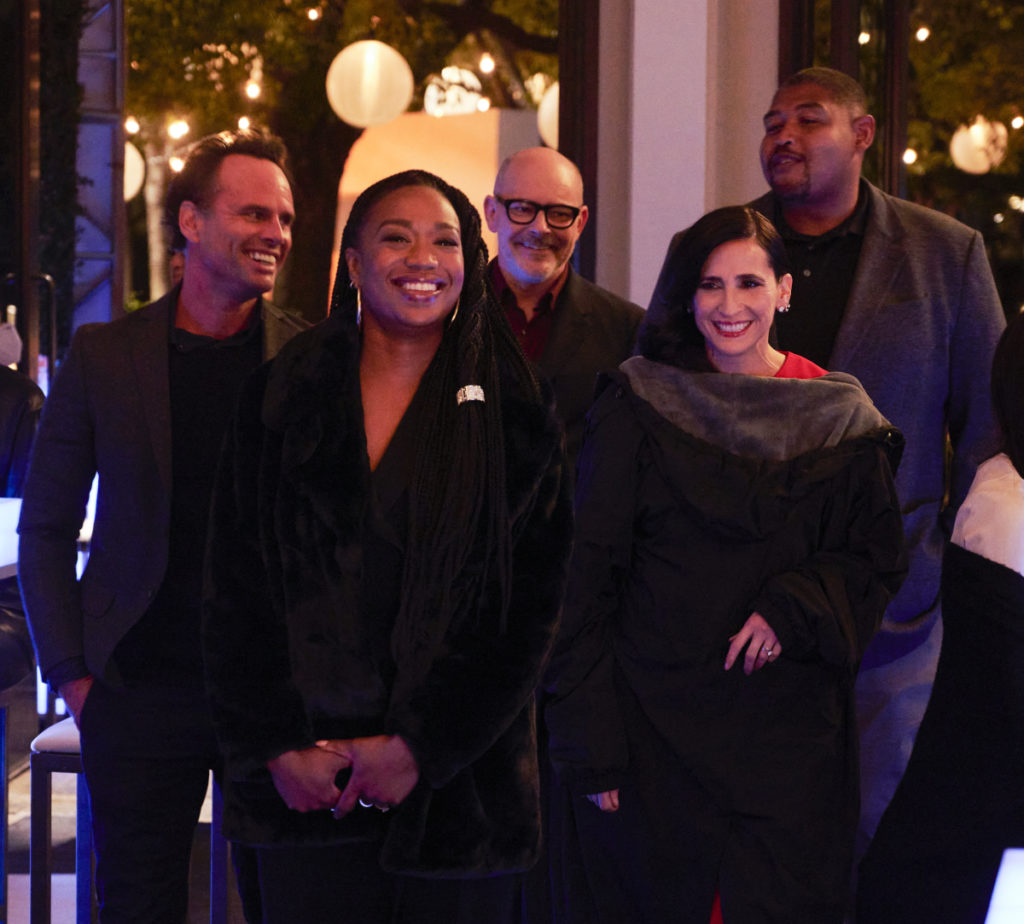 “Put Your Mask on First” – Wade comes to terms with putting his relationship with Shannon in the past and starts dating again. Also, Delia realizes why she has been so controlling her whole life, and Michelle takes on the role of managing Ben’s business finances, on the second season finale of THE UNICORN, Thursday, March 18 (9:30-10:00 PM, ET/PT) on the CBS Television Network. Betsy Brandt returns as Wade’s wild former fling, “Caroline,” and Rob Riggle returns as “Trey,” a slick hotel developer. Pictured: Walton Goggins as Wade, Maya Lynne Robinson as Michelle, Rob Corddry as Forrest, Michaela Watkins as Delia, Omar Miller as Ben. Photo: Cory Osborne/CBS ©2021 CBS Broadcasting, Inc. All Rights Reserved.

ICYMI: The Unicorn Finale Recap for Put Your Mask on First

The episode opens with Wade (Walton Goggins), Delia (Michaela Watkins), Michelle (Maya Lynne Robinson), Ben (Omar Benson Miller) and Forrest (Rob Corddry) enjoying a BBQ. Wade asks Delia if her burger is well done enough. She says it is fine, but they all know she will ask for it be cooked more later. She insists it is fine, once it is cooked a more on each side.

Wade asks Natalie(Makenzie Moss) if she is eating and she says yes. He then asks her to ask Grace and her friends what they want. He then gets a text from Shannon, but it turns out it was meant to another man.

The subject changes to the new hotel opening, which which will have taco and sushi bars. They ask if Wade will be bringing anyone, so he asks Delia and Forrest. However, they meant a date, so the subject turns to his dating life, as per usual. As they talk, Natalie gives the food order. Wade wonders why it is so big, so he goes into the garage, where he finds Grace (Ruby Jay) with a group of friends that includes boys.

He asks Grace what is going on and why there are boys there. She gets mad and asks the gang to find him someone to date.

Delia then brings up the therapist in her office, in hopes that Wade would want to talk to him. Meanwhile, Michelle tells Ben that she was looking through his books and wants him to cut expenses.

The next day, Delia talks to the therapist (Kevin Berntson) about Wade. He tells her to call him, but Delia says he won’t. She asks him if he will find a way to do it and he accuses her of being a control freak….leading to him listening to her talk about her past.

Wade and Ben are working when their boss Trey comes up to them and asks if they want to make some extra money. They both say yes, so he tells them about working on a new golf course. They agree to help and Trey (Rob Riggle)leaves to go meet his fiancee for lunch.

Ben wants to celebrate, but Wade isn’t so sure. Ben reminds him that Shannon moved on, so Wade agrees to go out, get drunk and hit on women.

Delia meets with her new therapist, who tells her that her issues stem from feeling abandoned by her mother. He tells her that he has another client coming in and she is happy she was one of his.

Michelle continues to give Ben unsolicited advice on what to do with the business. He tries to tell her that Trey won’t like those ideas and she gets insulted.

Forrest and Delia arrive to pick up Ben. Delia will be driving them to the bar so the guys get drunk. She brings up her therapy and Michelle is surprised she wasn’t in therapy already.

The guys are at the bar trying to find Wade a woman and forget about Shannon. They see Caroline (Betsy Brandt) from the support group there and decide that Wade should have a one night stand with her. He goes to talk to her and they catch up before hooking up.

The next morning, Wade apologizes to the girls for coming home late. The girls are arguing over the fact that Natalie isn’t allowed in the garage when Grace has certain people over. Wade says maybe they should renegotiate the garage, but Grace convinces him otherwise. He tells her that Jill warned him about her being smarter than him. Natalie asks if she said that about her too, but Wade quickly changes the subject.

The gang arrives at the party, ready to drink and chat. As Wade and Forrest get drinks, Delia admits that she keeps finding excuses to talk to her therapist. She goes to call him and excuses herself.

Michelle and Ben keep arguing over her butting into his work.

Wade is getting drink orders with Forrest when the waitress remembers them from her bartending job. She reminds Wade she gave him her number but he never called.

Trey comes up to talk to them and introduce him to his fiancee, who turns out to be Caroline. Things are awkward and Caroline comes clean about being with Wade, causing a major fight.

The gang leaves with Forrest fighting with the valet guy over where his key is, Ben upset about losing his biggest client and Wade realizing he badly screwed up. Delia goes to talk to him and tells him that Jill wanted him to move on after she was gone.

As they get ready to leave, the waitress Nina gives him his number, while Caroline tries to leave with him. The gang tries to get him to leave and as he gets into the car, he gets a text from Shannon, telling him she never went on her date. He says his life is insane as the episode and season comes to a close