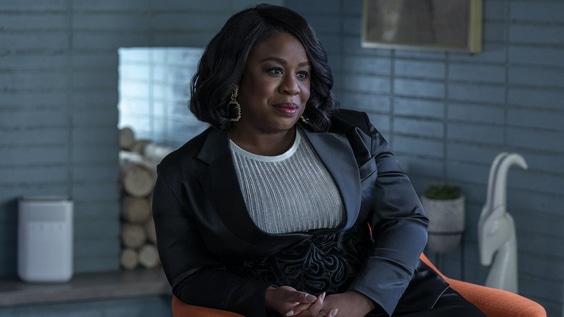 Here is a look at some more HBO announcements made at today’s TCA event:

IN TREATMENT: The Emmy®-winning drama series IN TREATMENT returns for its fourth season this May on HBO and will be available to stream on HBO Max. Emmy® winner Uzo Aduba (“Mrs. America,” “Orange is the New Black”) will play the lead role of the therapist at the center of the season, as the observant, empathetic Dr. Brooke Taylor.

The reimagining of the series is set in present-day Los Angeles and brings a diverse trio of patients in session with Brooke to help navigate a variety of modern concerns. Issues such as the global pandemic and recent major social and cultural shifts are a backdrop to the work Brooke will undertake — all while she deals with complications in her own personal life.

IN TREATMENT also stars Anthony Ramos (“Hamilton”) as Eladio, who works as a home health aide for a wealthy family’s adult son; Liza Colón-Zayas (“David Makes Man”) as Rita, Brooke’s longtime confidant and friend who supports Brooke as she contends with her own demons after a life-altering loss; John Benjamin Hickey (“Jessica Jones”) as Colin, a charming millionaire beach bum turned white-collar criminal reckoning with all the ways his life has changed following his recent release from prison; Quintessa Swindell (“Euphoria”) as Laila, Brooke’s distrustful, teenage client, struggling to carve out her own identity separate from her family’s overbearing expectations; and Joel Kinnaman (“For All Mankind”) as Adam, Brooke’s long-time on-again, off-again boyfriend who has resurfaced to create further complexity for her.

TINA: HBO’s TINA, a feature documentary from Academy Award®-winning directors Dan Lindsay, T.J. Martin and Lightbox, the production company founded by Academy Award-winning producer Simon Chinn and Emmy®-winning producer Jonathan Chinn, together with Emmy-nominated producer Diane Becker, is a revealing and intimate look at the life and career of musical icon Tina Turner, charting her improbable rise to early fame, her personal and professional struggles throughout her life and her even more improbable resurgence as a global phenomenon in the 1980s. The documentary debuts SATURDAY, MARCH 27 (8:00 PM- 10:00 PM ET/PT) on HBO and will be available to stream on HBO Max.

This unvarnished, dynamic account features insightful interviews with Tina herself, conducted in her hometown of Zurich, Switzerland, and with those closest to her. It also features a wealth of never-before-seen footage, audio tapes and personal photos, telling a deep and absorbing story about the queen of rock ‘n’ roll in all its complexity.

MARE OF EASTTOWN: Starring Academy Award®, Emmy® and Golden Globe®-winner Kate Winslet (HBO’s “Mildred Pierce”), from creator and writer Brad Ingelsby (“The Way Back”), with all episodes directed by Craig Zobel (HBO’s “The Leftovers”), the seven-part limited series MARE OF EASTTOWN, debuts SUNDAY, APRIL 18 (10:00-11:00 ET/PT) on HBO and will be available to stream on HBO Max. This limited series stars Winslet as Mare Sheehan, a small-town Pennsylvania detective who investigates a local murder as life crumbles around her. MARE OF EASTTOWN is an exploration into the dark side of a close community and an authentic examination of how family and past tragedies can define our present.