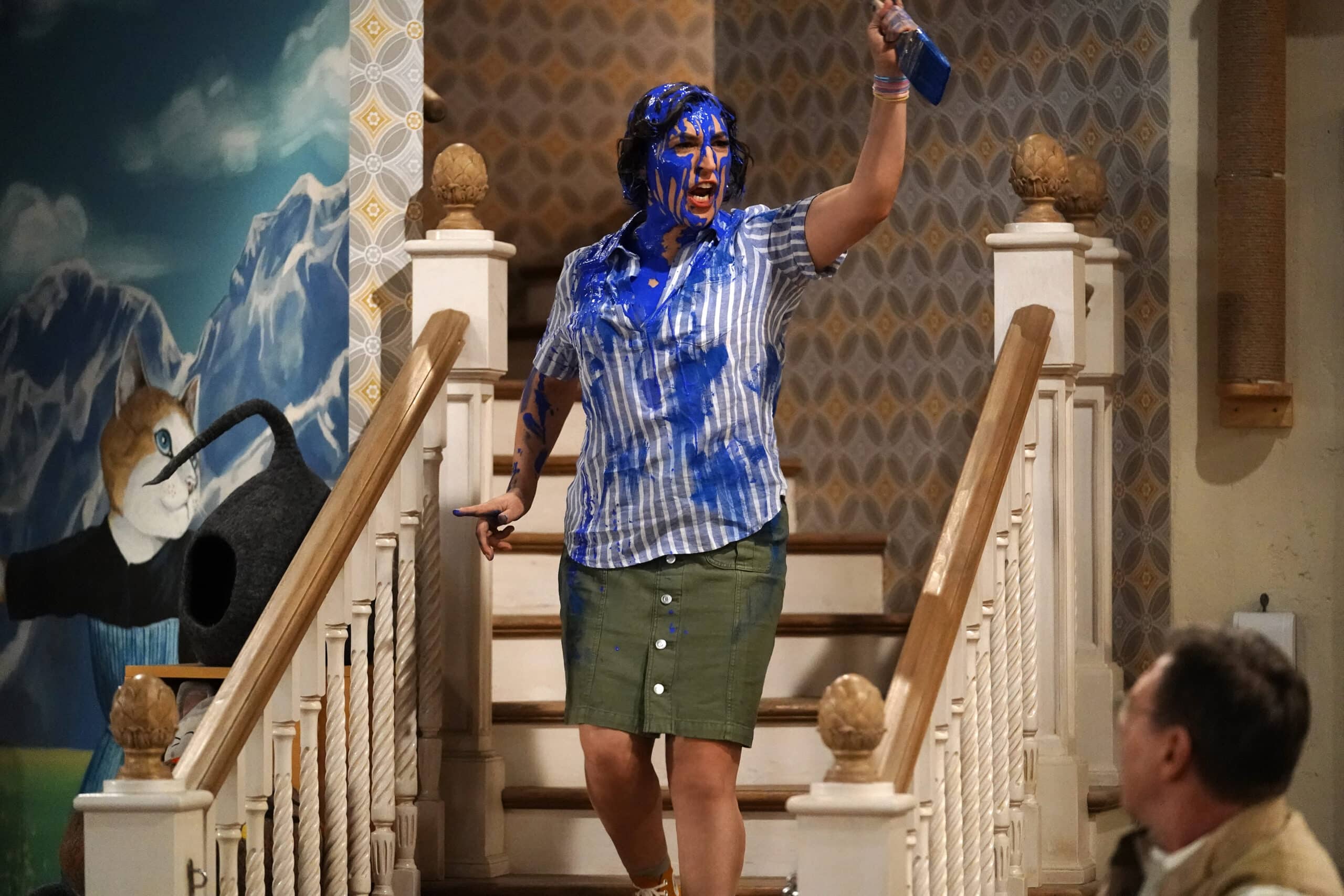 The episode opens with Kat(Mayim Bialik) talking about being sad on purpose, or melancholy for fun. Cue to clips of her singing, kissing and crying with her cats. As she continues to talk about it, her mother Sheila (Swoozie Kurtz) comes in, announcing that she is staying with her while her boyfriend is out of town.

Kat says it is thirty minutes later and her mom is already driving her crazy by forcing her to do facials and rearranging her things. She also gives her lipstick because it separates them from the common beast.

Phil (Leslie Jordan) Katches Kat sleeping in the cafe. She tells him that her mom is driving her crazy and tried to cut her toenails while she was sleeping. Phil says he does that for his mom because she cannot see her feet due to her glaucoma. He wants to give her medical marijuana, but Kat says that is illegal.

Sheila then comes down, asking if Kat brushed her teeth, only to catch her in lie.

Randi (Kyla Pratt) and Phil talk about baking ‘special’ sticky buns for his mother, which have medical marijuana in them.

Kat comes in, saying that her mom wanted her to shop for a type of olive that was hardest to find. Her customer Wyatt corrects her on how many kinds there are, causing Kat to correct him and ask him about petting the cats. He defends himself by saying that he didn’t have his glasses on. Kat then goes upstairs, but not before noticing Randi has the same sweater as her. Randi says Sheila gave it to her from the Goodwill bag, only to find out there was no Goodwill bag.

Sheila is painting Kat’s cabinets when Kat walks in and promptly freaks out. The two of them argue and end up getting paint on each other, causing Wyatt to be snarky and everyone else to stare at them in horror.

At the bar that night, Max (Cheyanne Jackson) and Carter (Julian Gant) say that Kat and Sheila should go to therapy and give her advice on how to handle it. Randy also chimes in with her own advice, while Phil makes it about him and buying his Mary Jane infused baking oil for his mother’s special glaucoma sticky buns.

Sheila and Kat go to therapy, where they alternate between singing and insulting each other. The therapist(Usman Ally) remains quiet, except to ask what O&C is when Sheila calls Kat out on it.

Phil and Randi mix up the sticky buns and are not sure which ones are the special ones for his mom. They each decide to try one and see what happens. Phil ends up high as a kite, calling Randi to watch him do splits while she is serving Wyatt more coffee.

Kat and Sheila continue to insult each other, particularly about the galloping Kat loved as a kid. This leads to Kat saying her dad accepted her for her and didn’t try to change her. Sheila says she is sorry she didn’t die instead of Kat’s dad, and Kat agrees, not realizing she said it out loud.

Kat apologizes, but Sheila says she did. The therapist asks when her Kat’s dad died and they both say it was 8 1/2 months ago. They continue to argue over how Sheila forced Kat into pageants, how Kat’s dad let her quit, Kat quitting her job and opening the cafe and how Sheila brought Preston to the funeral. They then bond over the fact that they both used anti-depressants, causing the therapist to point out how they both had different reactions to the same thing.

Randi goes to find Phil, who is at the bar with Carter and Max. She explains things to them and they talk about weed and their moms’ reactions to them using and drinking. Randi then admits she hasn’t spoken to her own mom in over a year.

Phil thinks he is invisible and tries to steal women’s purses and drinks. He also tries stripping until Randi stops him.

Kat and Sheila continue to talk about their reactions to the anti-depressants and how they miss Kat’s dad. They make up and the session ends with the therapist saying he cannot be their therapist because he is not a good fit for them…..and neither are his starfish hands.

The episode ends with everyone singing Careless Whisper, Randi talking to her mom and Phil coming down from his high as they all say goodbye.