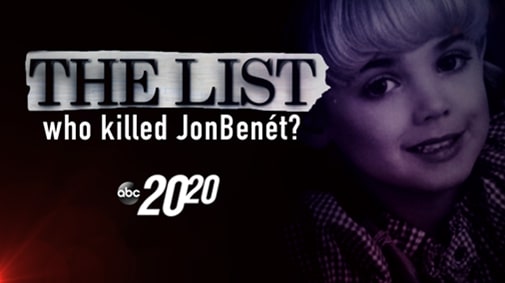 Who killed JonBenét Ramsey? Over 24 years later authorities are still trying to answer that question. A new episode of “20/20” provides new insight into the murder and showcases the exclusive network premiere of the video diaries of legendary detective Lou Smit, who was brought out of retirement to investigate the murder of the child beauty queen. Initially hired by the prosecution, Smit quit the case when his investigation convinced him that an outside intruder was responsible. Smit then dedicated his life to proving the Ramsey family’s innocence. On his deathbed he requested his children and grandchildren keep his search for the killer alive. In Smit’s video diaries he reveals his theories about what happened the night JonBenét died and his belief that DNA will ultimately expose the killer. Along with reporting by “20/20” Co-Anchor Amy Robach, the two-hour program includes interviews with Lexi Marra and Jessa Van Der Woerd, Smit’s granddaughters and hosts of the podcast “The Victim’s Shoes” on JonBenét’s death. They open up to “20/20” about the list of potential suspects he left behind, his confidence that one of the names on the list is JonBenét’s killer and how they’ve made it their family’s mission to carry on their grandfather’s legacy by trying to solve the case. “20/20” also features the first TV interview with John Andrew Ramsey, JonBenét’s half-brother and archival interviews with the Ramsey family, detectives and more. “20/20” airs on Friday, January 15 (9:00 – 11:00 p.m. ET) on ABC.

ABC News’ “20/20” is an award-winning primetime program anchored by David Muir and Amy Robach. A proven leader in the long-form newsmagazine for over 40 years, “20/20” features hard-hitting investigative reports, in-depth coverage of high profile trials, unforgettable, character-driven stories and exclusive newsmaker interviews. In conjunction with ABC Audio, “20/20” produced top true crime podcasts “A Killing on the Cape” and “Cutthroat Inc.” “20/20” airs Fridays from 9:00 – 11:00 p.m. ET on ABC and is available to stream on ABC News digital platforms and Hulu.