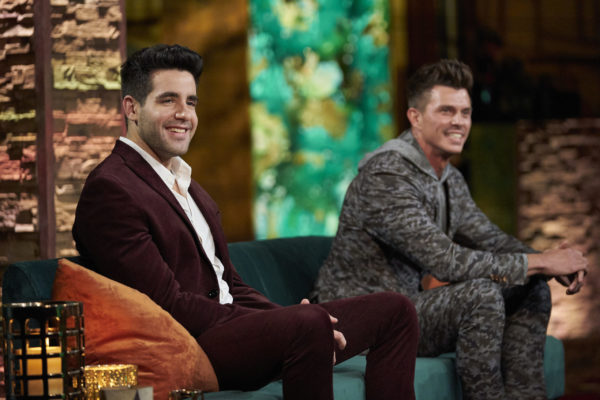 THE BACHELORETTE - Ò1610Ó ÐTayshia agonizes over which of the menÕs families to meet for hometown dates, and BennettÕs bombshell return adds even more pressure to examine her emotions. Hoping to gain some clarity, Tayshia takes Blake to a crystal guru to have their crystals and chakras read. Overcome with emotion, she makes some gut-wrenching decisions about her remaining men, which reaches a turning point at a high-stakes cocktail party and rose ceremony. Then some of the most unforgettable men in this unprecedented season Ð including Demar, Ed, Jason, Kenny and Yosef Ð join Chris Harrison to look back at the romance, drama and heartbreak that had Bachelor Nation talking on ÒThe Bachelorette,Ó MONDAY, DEC. 14 (8:00-10:00 p.m. EST), on ABC. (ABC/Craig Sjodin) ED

Tonight is the pre-hometown episode on ABC’s The Bachelorette. With eight guys left, Tayshia Adams is going to have to make some tough decisions, especially now that Bennett made his return.

She has yet to decide if she is going to keep him, but the other guys have no idea he is back.

Before going on her date with Blake, she goes to meet with Chris Harrison, who gives her one of his famous pep talks. Meanwhile, the other guys discuss where they think they stand and who will go on hometowns.

Blake goes on his first one on one with Tayshia, which consists of a Reiki and crystal master clearing their chakras. It is quite interesting to see how it works, especially with the stone sharing and the symbolism behind the crystals–blue means communication, which is something that is very important to Tayshia.

Gita, the woman doing the ceremony, then reads their chakras, which Blake thinks is working in his favor. However, it is quite the opposite, which worries Tayshia and makes her realize he is not the guy. She gives him the talk and lets him go home, sans rose. She is in tears, but knows in her heart she did the right thing.

Tayshia then goes to talk to the other men, still crying. She explains how she sent Blake home and then asks Riley to talk. The two of them go outside and she lets him go, breaking his heart and making him feel a bit offended. He leaves as the both of them cry.

Bennett returns and no one is happy to see him, especially not Noah. Chris Harrison comes back to tell them the cocktail party is canceled, so they are going straight to the rose ceremony.

Rose Ceremony! Ben already has a rose, so there are only three to give out.

Zac (the one who looks like baby Mauricio Umansky)

Brendan (Still no clue who he is.)

Bennett (Harvard dude who got two rejections in one season)

Tayshia toasts to her final four men and says she cannot wait to meet their families!

There is no stage and no audience due to the COVID pandemic. After we get to the highlights of this season, we get down to business.

Ed talks about his issues with Chasen, epsecially when he used the same adjectives to describe his feelings for both Clare and Tayshia. Demar calls him out on this, bur Ed doubles down on how he feels. However, Bennett defends Ed on why he felt how he did about Chasen.

Noah then talks about Bennett and why they didn’t like each other. Bennett calls him out, which causes more tension between them. He is upset because Noah still doesn’t seem to understand what he is saying.

Riley seems to be Team Noah, while Kenny seems to be Team Bennett. This causes more drama and Kenny being called the One Direction Party Manager in Camo. The fighting continues with Bennett apologizing and Noah not accepting it and telling him they will never be friends.

After some more flashbacks from the season, including the chakra area with, ahem, certain areas of Blake’s anatomy being black boxed and Ed’s late night drink with Chris, we get to Yosef being called to the hot seat. We see a flashback to his time on the show and then he gets questioned by Chris. He doubles down on his feelings, but the guys call him out for his behavior. Yosef still has no regrets and refuses to apologize.

Tayshia faces her guys for the first time since she let them go. She says this was NOT a set up and she didn’t even know if she was going to be the Bachelorette at all because no one knew what Clare was going to do.

She goes on to say Noah had amazing energy and still prefers him without the mustache.

Bennett talks about his feelings for her and she says she respected him enough to think about what he said. However, at the end of the day, it just wasn’t there.

We then see her breakup with Blake and she shares how hard it was to send him home. However, she also felt as if they weren’t there yet. He says it was bad timing and asks if things would be different if she gave it more of a chance. She says time there were also other factors, including his lingering feelings for Clare.

Riley then gets his own flashback right up until his blindsided breakup. He talks about his heartbreak and joins Tayshia on stage. He confesses his feelings some more and she tells him he is incredible and there was nothing bad that he did to scare her off. She thinks he will be an amazing husband and dad one day to the right woman.

After some bloopers, we get more sneak peeks, but we have to wait until tomorrow to see more. Stay tuned.