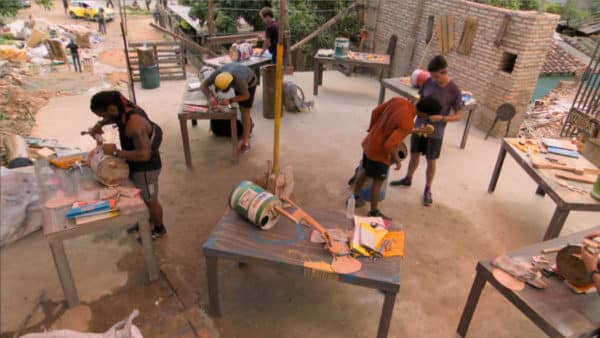 "Olé, Olé!" -- Teams race through Asunción, Paraguay when they compete in a series of switchback Detours from season 20 where they must either stack a pyramid of watermelons or perform a traditional Paraguayan bottle dance, on THE AMAZING RACE, Wednesday, Nov. 4 (8:00-9:00 PM, ET/PT) on the CBS Television Network. Phil Keoghan is the host. Pictured L-R: DeAngelo Williams, Maddison McKibbin, Leo Brown, Eswar Dhinakaran, and James Wallington jPhoto: Screen Grab/CBS ©2020 CBS Broadcasting, Inc. All Rights Reserved

Tonight’s episode of CBS’s The Amazing Race takes place in Paraguay. The remaining teams will travel there to collect clues and hopefully make it to the next round. James and Will print out maps for their alliance (Riley & Maddison, Hung & Chee, DeAngelo & Gary, and Eswar & Aparna), while Leo and Alana plan revenge against them due to the U-Turn fiasco.

Everyone is on the same flight, putting them on an even playing field. However, Michelle and Victoria and Will and James fall behind due to taxi trouble. This tickles Leo and Alana because they think it’s karma.

Riley and Maddison and Eswar and Aparna are in the lead, ending up at the orquesto de reciclados. Once there, they have to complete a roadblock, which consists of making a cello out of junk. The other teams slowly arrive, with the alliance helping each other out. Kaylynn and Haley are behind because their taxi driver has to ask for directions.

DeAngelo and Gary get the next clue and see they are allowed to use the Yield. However, they decide against it and move on to the detour, which is a choice between stacking melons or dancing with a bottle on their heads.

More teams move on (rejecting the Yield) while Eswar and Kaylynn struggle with the roadblock.

Leo and Alana decide not to use the Yield on James and Will since they are already so far ahead.

Hung and Chee switch detours midway through. Most teams struggle with the detours, but Will and James finally finish correctly and rush to the Pit Stop at Plaza Italia. They are in first place and each win $5,000.

Michelle and Victoria are team #2, despite being so far behind in the beginning of the leg.

Hung and Chee continue to struggle as Eswar and Aparna arrive at the detour.

Leo and Alana and Riley and Maddison finish, giving them third and fourth place, respectively.

Eswar and Aparna finish the detour quickly and rush to the pit stop, where they are in fifth place.

Hung and Chee are in 6th place and agree to communicate better in the future.

Kaylynn and Haley are also safe, because it is a non-elimination leg.