After a week of birthday wishes for Beth Riesgraf who plays the thief “Parker”, and Executive Producer Dean Devlin, the cast and crew posted a few more teases regarding the Leverage Reboot currently filming in New Orleans.

It seems they filmed in a hangar that sparks memories of The First David Job and The Big Bang Job from the original series.

Devlin also teased a scene shot the next day.

Today I just shot my first Parker/Hardison scene for the new show. Delicious!!! Two wonderful actors at the top of their game! #Leverage2

The thief is back in town 🖤 First thievin’ stunt rehearsal… checkkkk!🤸🏼‍♂️#leverage2 #nola

Could this piece of equipment be involved?

I wonder who will be using this fun rig? #Leverage2 #allthecooltoys pic.twitter.com/z1fFNSXIFt

And based on a background casting notice, the show will involve a high end casino.

Leverage 2.0, like the original series, follows a group of reformed crooks as they steal from corrupt businessmen and wealthy criminals. The reboot stars four of the five original cast including Riesgraf. Gina Bellman is reprising her role as the grifter “Sophie Devereaux”, Christian Kane is back as hitter “Eliot Spencer”, and Aldis Hodge is hacker “Alec Hardison” appearing as scheduling with his other show, City on a Hill, will allow.

New cast members include Noah Wyle (The Librarians) as “Harry Wilson”, a corporate lawyer who has realized he’s been on the wrong side of the table, and Aleyse Shannon (Charmed) as “Breanna Casey” Hardison’s tech genius little sister. 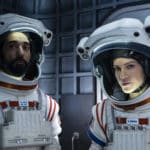