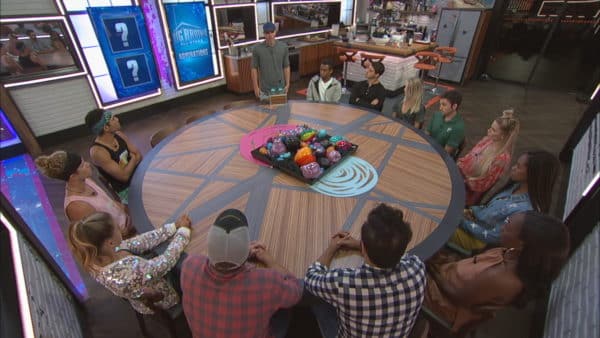 Season 22 of BIG BROTHER ALL-STARS follows a group of people living together in a house outfitted with 94 HD cameras and 113 microphones, recording their every move 24 hours a day. Each week, someone will be voted out of the house, with the last remaining Houseguest receiving the grand prize of $500,000. Airdate: August 30, 2020 (8:00-9:00PM, ET/PT) on the CBS Television Network Pictured: Cast Photo: Best Possible Screen Grab/CBS 2020 CBS Broadcasting, Inc. All Rights Reserved

Tonight is POV competition number four on CBS’s Big Brother. Last Sunday, we found out that Kaysar and Kevin were on the block due to not playing the game to Enzo’s liking. Now they, along with Enzo and three other players, will play for the POV in hopes that one of them will be taken off the block.

Kaysar is definitely the target, even though Enzo tells him they can work together. Kevin is the pawn at this point. Nicole isn’t sure about the nomination, but decides to keep her mouth shut because she has no idea who is the replacement nominee.

David tells Bayleigh he feels like an outsider in the game and how his game is shaky, which makes her feel bad.

Ian also talks game with Enzo, but he is annoyed with him and everyone constantly bothering him. He only wants to talk to Cody, who agrees Ian should be backdoored.

Memphis begins a talk show with Kevin and David, where David says he will play in the POV for Kevin. They all decide that it is time for a house shake up.

POV players are chosen! Enzo, Kaysar and Kevin are joined by Tyler, Bayleigh and David, chosen by the three initial players, respectively.

Kaysar tries to warn Bayleigh about her alliance being fake, but she thinks he is just being condescending and refuses to listen to him.

Meanwhile, Enzo, Cody and Tyler are upset that Kevin chose David for houseguest choice to play. They do not have any trust in David and don’t know why he was chosen.

POV time! The players have their arms and legs tied with puppet strings, the last one standing will win.

Ian is nervous about being put on the block, which is what Cody tells his alliance he wants to do. However, Nicole vetoes that idea since she is working with him on the sly.

Enzo is ready to make a big move. He is considering putting Ian up, but then considers Dani when she suggests a Slick Six meeting in front of Nicole, forgetting that Nicole is in the alliance.

However, Christmas offers herself up as a pawn and ends up the replacement nominee when Kevin is taken down.