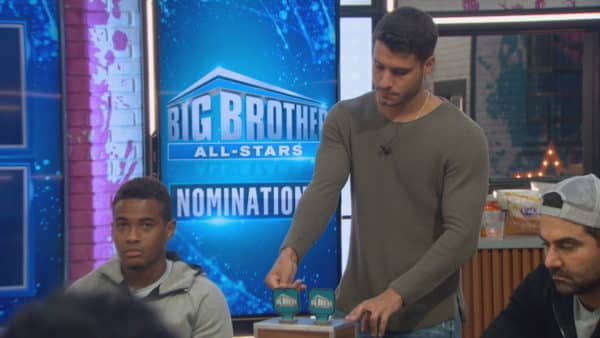 Tonight is the third episode of CBS’s Big Brother All Stars. When we last left our houseguests, Keesha and Kevin were put on the block. The POV competition will determine if they stay on the block or if someone gets backdoored.

Cody admits he nominated them because he doesn’t know them that well, while Nicole F is upset because she wanted Janelle and Kaysar on the block. However, they were saved by the safety suite.

Kevin is embarrassed to be on the block, but Cody tells him he is safe. It makes him feel better, but he is not sure if he is telling the truth.

Keesha goes to talk to Cody in the HOH room and is told that there is no target. However, in the Diary Room, Cody reveals that Keesha is indeed the one he is gunning for. She kind of senses she is a target and is determined to win the HOH competition.

Kaysar, Da’Vonne and Nicole A talk about the unrest in America and have an emotional talk that brings them to tears. I am also in tears because it is so moving and emotional, especially with everything happening in the world.

Tyler makes a bunch of conflicting alliances, which might get him into the same trouble he was in the last time, while Enzo makes a final two deal with Cody, who also has one with Nicole. Let the backstabbing alliances begin!

Ian talks about being on the autism spectrum. He says he refuses to let it define him and makes Nicole A proud. They decide to work together.

Kevin tries to find alliances and a way to stay in the house, so he starts trying to find people to get him off the block….if they win POV. However, Ian shoots him down and Enzo and David refuse to say anything one way or another. Maybe it was not wise to talk to them while in the potty?

POV time.Cody, Keesha, Kevin, Tyler, Ian and Enzo are all competing. It is a game where they have to gather wooden produce while rocking on a banana to get more time. They have a total of thirty minutes to get as much as possible in 90 second increments. It is a bit confusing on how it works, but in any event, Enzo wins after Kevin messes up by letting the clock run out.

Now it seems like Nicole F and Ian have a deal going on, even though it seems as if he was going to work with Nicole A and she has a final two deal with Cody. Even though she is loyal to Cody, she tells Ian they have a deal as well.

Kevin and Keesha plead their cases to stay in the house.

Da’Vonne and Bayleigh form their alliance and make a final two deal.

Ian and Nicole F are caught talking in the bathroom by Enzo, who then tells Cody. They consider putting Ian on the block because they think he cannot be trusted.

Veto Meeting time! Cody decides to leave the nominations as is and tomorrow either Keesha or Kevin will be sent packing. Stay tuned!