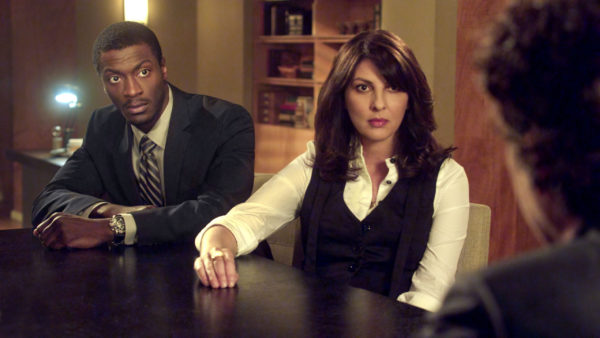 As a fan of the original TNT series, I was beyond ecstatic when Executive Producer Dean Devlin announced in April that Leverage was getting a reboot and would begin production summer 2020. Even more so when four of the original five cast members were returning.

With much of the entertainment industry in limbo for months due to Covid-19, it wasn’t certain exactly when this would begin. However, signs of life started sprouting on social media, starting with this post from Devlin on his accounts.

Exciting to have these faces on my office wall again! #Leverage pic.twitter.com/2jYpURz9m0

Even more compelling that this is happening is this tweet from Gina Bellman, who plays the role of Sophie Devereaux.

This can only mean she will soon be joined in New Orleans by Christian Kane as “Eliot Spencer”; Beth Reisgraf as “Parker”; and Aldis Hodge as “Alex Hardison”. Joining the returning cast is Noah Wyle, known for his role in The Librarian movies and TV series, also produced by Devlin. Extrapolating from Devlin’s picture, I surmise his character’s name is “Harry Wilson”

What we know so far about the show:

Things I can only speculate on:

● Wyle’s character is the new mastermind, taking over the role initially played by Timothy Hutton.
● Hodge was initially billed as a recurring character, as he also stars in City on a Hill, thought to be filming at the same time. Could he play a bigger role in early episodes as productions continue to slowly start up in Hollywood?
● Will we join the characters sometime after season 5 of the original series? Or will everything start from scratch and we get to see them gel as a team again?

I’m seriously excited about this show returning, but above all I want cast and crew to stay safe.