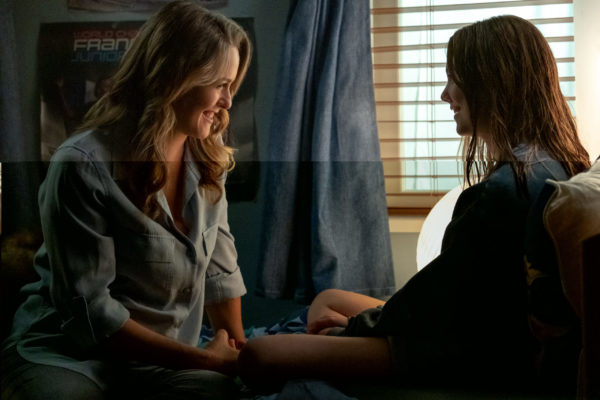 The episode opens with Kristy (the narrator of this episode) talking off screen about how everything began one Friday after school at the beginning of seventh grade. She was walking home from school with her best friend Mary Anne Spier. She was doing most of the talking, while Mary Anne listened, as usual.

We then cut to Kristy and Mary Anne walking home. Kristy is complaining about her teacher Mr. Redmont going on and on about how Thomas Jefferson said all men were equal and how she argued that if he were such a genius, he would have said would be all people.  Apparently she spoke out of turn and too loudly, resulting in her having to write a paper on decorum.

Mary Anne asks what that means. Kristy says it means not talking when called on and being polite and invisible. She says the boys stuff Kleenex down their pants in the bathroom and wipe sweat on each other, yet she is the one who is disruptive.

Mary Anne worries that Mr. Redmont will call Kristy’s mom, which will mess up their sleepover plans. She says she almost convinced her dad to let her Postmates pizza and ice cream. Kristy is impressed with the double dairy and asks if the key to the liquor cabinet was next. Mary Anne says sugar is progress. They agree they cannot wait as Mary Anne heads into her house.

Kristy narrates that Mary Anne’s mom died when she was a baby and that she has a super strict, but caring dad. She says her dad left when her younger brother David Michael was born  and eventually stopped contacting the family.

As she walks home, narrator Kristy talks about Claudia Kishi, who lives next door. She says they all used to be friends, but then Claudia got more into clothes and boys and stopped wanting to hang out. She says she misses her as the girls wave to one another.

She sees her brother David Michael waiting outside and wonders why he didn’t go to the Kishis if he couldn’t go inside. She also saw he had an accident and he begs her not to say anything. She takes him inside to change and make him a quesadilla.

Later on, Kristy, David Michael, Sam and Charlie are playing games when their Mom Elizabeth comes home with pizza. She asks who is hungry and Sam complains that she blocked his shot. Everyone is suspicious of the pizza and the fact that she is home early.

She says she actually needs a baby sitter for David Michael because she has a meeting with clients. Everyone is busy, so Elizabeth tries to make calls to find a babysitter. She also tries a baby sitting network online, but it is too expensive to renew. She is frustrated and and rants about how things were different when she was a kid. Her mom would just call someone on a landline and get a babysitter. She also asks if Mary Anne can sleep over instead, but Kristy says her dad won’t let her if Elizabeth is out.

At that moment, Kristy chokes on her pizza and her mom goes over to help.  As her life flashes before her eyes, she gets an idea for a babysitters club.

She tells Mary Anne about it at the sleepover, but Mary Anne isn’t quite convinced it will work, or that anyone will trust them with their kids. Kristy argues they babysit David Michael and kids deserve fun babysitters. She also says they can charge half of what current sitters charge and still be rich.

With Mary Anne in agreement, Kristy decides to ask Claudia and passes her a note in class to tell her about it. They get caught and the teacher asks to see the note. Claudia plays dumb and the teacher reminds Kristy that she owes the decorum essay and tells Claudia to stop defacing her shoes and pay attention so she doesn’t fail another test.

It turns out Claudia answered the note by writing ‘OK’ on her shoe.

The girls arrive at Claudia and are greeted by Mimi who says the girls are upstairs and that she is making tea. They wonder who the other girls are as they head upstairs. They greet Janine, Claudia’s older sister, who slams the door in their face before heading into Claudia’s room.

Claudia introduces them to Stacey, who just moved from New York, exciting Mary Anne. Stacey seems excited about the club. Kristy is annoyed that Claudia told her, even though it was technically not a secret.

As Claudia breaks out Twizzlers hidden in a hallow book (which Stacey turns down), Kristy explains the club, her mom’s situation (including the website debacle, which Claudia thinks is a way to sell information to Russians)and how she thinks it will be a great idea to meet up a few days a week so people can find sitters.

Mary Anne doesn’t think her dad will let her use her phone for the club, but Kristy says they will use an olden times phone, or a landline, which Claudia has in her room. It also has high speed Internet, which Janine uses for her nerd stuff.

They agree to meet three times a week and use social media to advertise. Claudia hands out more candy, which Stacey turns down again.

Stacey tells them about her babysitting experience, even though Kristy assumes that most NYC kids have nannies. Stacey says she is confusing real life with Gossip Girl and that while kids do have nannies, they still need babysitters on the weekends and at night, which gave her jobs.

As Mary Anne and Kristy leave, they talk about Stacey. Mary Anne thinks she is cool and nice, but Kristy thinks she has body image issues because she didn’t eat. MAry Anne tells her that she is nice and they can be friends.

Kristy comes home to see her mom’s boyfriend Watson there with Chinese food. She is annoyed with him and how they keep gushing over the food. Kristy snarks that he didn’t even cook it. Elizabeth breaks the tension by telling him about the club. He asks questions and she gives short, condescending answers. He says it is a wonderful idea.

Elizabeth says that Watson asked her to marry him and she said that she wants to discuss it as a family before she says yes. Kristy is not okay with it and ends up fighting with Elizabeth, which results in her being sent to her room.  She (as the narrator) says that she does not want Watson to see her cry.

Later on, she begins to send her mom an I’m sorry email while saying (as narrator) that she wants her to be happy, but them to be enough). As she is writing  the email, Claudia sends her the block logo. She smiles in approval.

The next day, the girls discuss being officers. Kristy says that she should be president since she has the most experience and the club was her idea. Stacey scoffs, and Kristy says she is bossy, so get used to it.

Kristy says Claudia is Vice President because they are using her room, Mary Anne requests to be secretary because she is organized and can do google docs for schedules and minutes. She then asks if that is okay and the girls agree.

Stacey says this is the most she heard her speak. Claudia says she knew her since birth and same.

At the meeting, Stacey is helping them with social media (which none of them have because Marat Anne says it is illegal to have before the age of thirteen and Claudia claims it rots your brain)when Janine comes in, asking if she can make a suggestion.

She says that since they are stating from scratch, they should use analog advertising, such as flyers. Stacey requests to be treasurer and they decide to take Janine’s advice.

The girls begin to send out flyers when Mary Anne and some dude make googly eyes at each other. Watson cheers for them.

At the next meeting, they wait for the phone to ring and wonder if it works. Mary Anne wants to leave because her dad hates when she is late. Kristy asks what she will do if a client is late.

At that moment, Watson calls to offer them a job watching Karen and Andrew. Kristy is a bit sassy with him before offering the job to the girls. Stacey is out of town, Claudia has a live art class (with nude models), Kristy refuses and continues to be sassy as Claudia puts her on mute.

Mary Anne ends up with the job, despite Kristy not wanting her to take the job and Claudia saying she is being too bossy and this is why they stopped hanging out.

The next day, Kristy goes to spy on Mary Anne at her job and sees Watson giving her instructions. She hides in the bushes with her dog while Mary Anne plays with the kids on the trampoline. Karen is in the background discussing Morbidda Destiny (the neighbor she thinks is a witch and put a spell on Boo Boo)when Kristy is caught in the bushes by the witch herself. This causes Mary Anne to get her attention, Louie running away and Kristy walking home alone whilst catching Stacey in a lie….she is not out of town after all.

She gets home and sees her dog with her mom. Later on, they have a long talk about her behavior and Elizabeth giving her advice on how to do better. Elizabeth asks her about her paper she owes her social studies teacher and they agree a boy would never have to write one. Kristy realizes while her mom may have odd taste in men, she is not totally clueless.

At the next meeting, Kristy brings pizza (and a salad for Stacey) as a peace offering. She also apologizes for her behavior and promises to do better. They agree to forgive her as they get a call from a new client, the Marshalls. They were recommended by Watson.

They get another call, who happens to be Watson’s neighbor. She texts her mom to thank Watson, who tells her to do it herself.

The episode ends with her discussing how decorum means (to her) how to treat others, being a good friend and admitting when you are wrong. 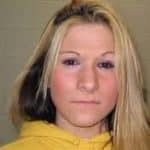 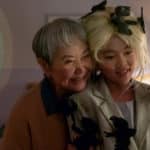