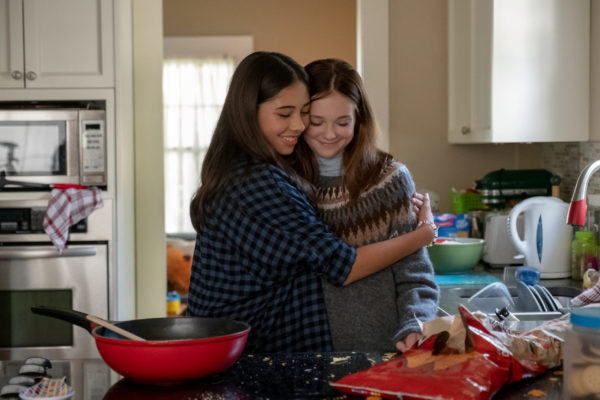 The episode opens with Dawn narrating. She says how normal moms wait up for her daughters on first dates and help unpack after a move. She says her mom is anything but normal. As she unpacks and finds a hand mixer on a bookshelf, her mom arrives home from said date in a very good mood.

Dawn asks how the date went and her mom says it went well and the guy was nice. She then asks if Dawn was cooking and something smells delicious. She takes the mixer and puts it back on the shelf, walking away as Dawn sighs.

Later on, Dawn and Mary Anne discuss the date, which happened to be wit Mary Anne’s dad. They discuss how it is like Romeo and Juliet, but with law school and reconnecting in middle age.

They discuss a possible wedding when Dawn changes the subject to the BSC. She is excited to be included in something again. Mary Anne looks uncomfortable. It turns out Kristy has no idea she is coming, which upsets Dawn. However, Mary Anne thinks it will be fine.

At the meeting, Kristy says this goes against bylaws of the club. Claudia questions this, and Kristy says she wrote them during break.

Mary Anne defends Dawn and says now that the holidays are over they will need a new sitter because they will be overstretched. Stacey welcomes her as a fellow new girl. She and Claudia agree that the bylaws should kick jobs to those who overspend on holidays and shoes.

Mary Anne says she is redecorating her room, which leads to the girls going on Pinterest and Kristy feeling left out. That all ends when Natalie Barrett calls, wanting a sitter for her kids. Stacey and Claudia refuse to take the job and Dawn asks why. Kristy says she is newly divorced and the kids are out of control. Dawn defends Natalie, so Kristy challenges her to take the job.

She asks if she is in the club. Kristy says it is on a probationary basis. Stacey says she will do great and get in the club. Claudia says that if not, Natalie will lose their number forever, so it is a win win. Kristy wishes her luck and not to say she didn’t warn her.

Dawn narrates that she is an expert at dealing with disorganized moms since she has one herself.

Dawn and her mom are grocery shopping. Dawn’s mom wants polenta and risotto, but Dawn says that every time she feels the spirit of a dish, they don’t eat until 10. Sharon gives her a purse snack when she runs into an old friend. Dawn narrates that this happens a lot while she herself is trying to fit in. As she continues to walk, she runs into Mary Anne and her dad. Sharon walks up, making Richie nervously ask if they can have dinner together. They flirt a bit while the girls squeal.

At dinner, the parents flirt while the girls get a text (despite Richard not wanting cell phones at the dinner table)from Claudia about plans for Mary Anne’s room. Richard is a bit hesitant, but Sharon tells them they are having fun. He tells them not to go overboard.

The next day, Dawn arrives at her job at the Barretts. The kids are playing the lava game sand screaming, while Natalie is prepping for an audition, ignoring the chaos. She does check on the crying baby and gives her to Dawn as she rushes it the door. As the chaos continues, she feels a bit overwhelmed, but eventually gets the kids to calm down and the course cleaned. The process continues for several days as Natalie continues to hire Dawn to work.

At one point, Dawn is exhausted, but Natalie is arguing with her ex husband and continues to give her work to do. She brings it up at the meeting and tries to sleep, but the girls tell her to talk to Natalie. However, Kristy thinks Natalie needs someone with more experience. This leads to Dawn to inviting Kristy over.

The next day, the girls’ moms bond and gossip about Richie, while Kristy puts Dawn through a BSC boot camp. During the whistling lesson, Dawn’s dad calls, making Kristy upset enough to leave.

Dawn discusses it with Mary Anne, because she isn’t sure if she upset her or went against the rules. Mary Anne says to give Kristy the benefit of the doubt. Claudia interrupts the tension with room ideas. The girls fix things with Stacey and Sharon when Richie walks in, upset with all the changes. He kicks everyone out in anger. Dawn narrates that her mom, who was upset over this, didn’t speak the rest of the night.

Dawn helps Natalie audition for a part, which leads to Natalie venting to Dawn over her ex, her son being naughty and her life. She leaves to go to a plastic surgeon. Dawn is confused because she thought she had the audition. Natalie says it is Monday.

Dawn asks Buddy to have a British Bake Off when she realizes he is missing. She calls Kristy because Buddy mentioned wanting to play with David Michael (he was not allowed due to being grounded) and confesses he is missing. Kristy comes over, along with Sharon. Dawn tells them Natalie left no contact information. They call the cops.

Buddy’s dad comes and it turns out he took Buddy to swim class. It was a misunderstanding and he says it is not surprising that Natalie forgot to tell her. He apologizes as he hugs Suzi. The cops question him.

Later on, Kristy and Dawn argue, causing Kristy to have a meltdown. It turns out she is upset over not having her dad in her life. She is jealous Buddy sees his dad, Mary Anne has her dad and Dawn has a dad who calls. Dawn tell her people love her and they bond over being strong women with big personalities. Kristy invites her to be the alternate officer and they hug. Kristy offers to clean up from her tantrum, but Dawn says Natalie won’t even notice.

Richie calls Mary Anne to dinner and she tells him to go away. He sadly closes the door and leaves. He opened a box with a picture of Mary Anne’s mom decorating her room, looking sad.

The show ends with Dawn and Sharon eating dinner together. During the meal, Natalie calls. Sharon answers, saying she can call when she gets her life together. Dawn says she could have done that and Sharon says she wants to protect her. 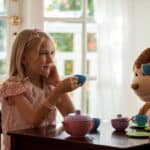 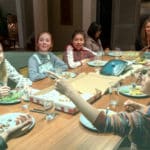