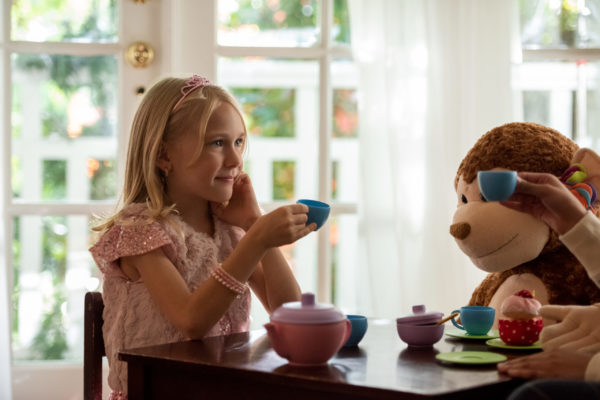 The episode opens with Mary Anne mooning over how she is the least cool member of the BSC. Each girl has her own cool style, while she feels like a toddler or old lady. She says the latter may be true because she spends a lot of time with Mimi, who is teaching her how to knit. They are knitting together when Mimi gives her funky yarn and special tea. She also talks about Mary Anne’s late mother and how the two of them once chased a water polo team out of the pool.Mimi says her mom stood up for others, which made her a brilliant lawyer. Mary Anne says that is nothing like her and Mimi tells her that her mom didn’t become like that overnight.

Claudia calls her up for the club meeting. During the meeting, one of her dad’s coworkers call, asking her to babysit.She agrees to the job, even though it is against the rules to take a job without offering. This upsets the girls and they shame her for not being assertive. She ends up crying and leaving the meeting.

She gets home as her dad is cooking dinner. He is prepping for a big night when he sees she is upset.  She ends up saying everyone thinks she is a baby and how her friends think she is pathetic. Richard thinks she is being bullied, so he wants to talk to Liz. She says to forget it and runs off.

The next day at school, she finds out her dad called the parents of the BSC members and now they refuse to talk to her because they are grounded. They refuse to let her sit with them at lunch.

Kristy is now sitting with the Shillaber twins, while Stacey and Claudia are sitting together.

She walks off to sit alone. A new girl named Dawn sits with her. She is from LA and says they eat differently out there. Mary Anne asks her why she moved there. She says her parents got divorced and explains how her dad is gay, but her parents were trapped in a cycle of codependency. Her mom grew up in Stoneybrook, so she came along for the ride.

Dawn asks if Mary Anne is new, but she says her friends are dead, then says she is joking and they are absent. Dawn says she is dark but funny, leading Mary Anne to open up and tell jokes. She invites Dawn over after school and she agrees, while Kristy looks on in anger.

Later on, she is babysitting and having a tea party with Bailey. They go to dress up when Mary Anne sees a closet of boy’s clothes. She says those won’t do, so Bailey shows her some princess dresses.

They are still going through the dresses when Francine walks in, happy they are getting along.

Mary Anne says (in narration) Bailey is a little girl and her clothes let people see that.

Later on, Dawn and Mary Anne are talking at her house. They talk about how Mary Anne is right handed and can’t do things lefty, just like Bailey know she is a girl and she wants her outsides to match her insides. She says it is rad her parents and Mary Anne get it. Mary Anne says she knows a lot about this and Dawn quips that it is because she is from California.

Mary Anne says she realized that she never made a new friend without Kristy before and it is a good thing she did because now she feels like the BSC outsider. At the meeting Francine calls, requesting Mary Anne. The other girls are upset and jealous. She says at least she has Dawn.

That weekend, she goes to an event with Dawn, her mom and Dawn’s aunt,who happens to be Morbidda Destiny, aka Esme. It turns out she is a witch (according to Dawn’s mom) and she leads them in a spiritual ritual. During the event, Dawn talks about how welcome she feels and introduces everyone to Mary Anne. She is a bit shy going up, but the ladies encourage her to talk. She gets scared and runs off. Dawn goes after her as Mary Anne apologies and cries. Dawn is understanding and they go off together.

At another babysitting job, Bailey is feeling ill. Mary Anne realizes she is sick with a 104 fever. She cannot find anyone to help her, so she calls 911. They end up taking Bailey to the hospital, where the doctors refer to Bailey as a he. Mary Anne takes them outside sets them straight, telling them Bailey is a SHE and they better refer to her as a SHE. She then demands a non blue gown, as her dad arrives and watches on in pride.

Later on, Richard drives her home. Mary Anne apologies for going to the hospital, but he says he is overwhelmed by how much she is like her mom. He explains that it isn’t easy being a single dad and they have a sweet bonding moment. He even agrees to let her to change her hair and clothes. He says the braids were the only thing her mom taught him to do and says the clothes seemed appropriate. They decide to bond some more over ice cream.

At the next club meeting, the girls call her a hero and say they are ungrounded, thanks to Richard calling their parents and saying they are great influences. Kristy is still mad, but says she is actually jealous of Dawn. Everyone hugs it out and bond over music and junk food.

The episode ends with Mary Anne showing off her new outfit and lip gloss. She hugs her dad as she comes downstairs and says Dawn and her mom are coming over for Thanksgiving. It turns out Dawn’s mom and Mary Anne’s dad were high school sweethearts. Esme says they dated in a big way and hopes they didn’t expect her to bring stuffing. The girls are thrilled over this brand new information.