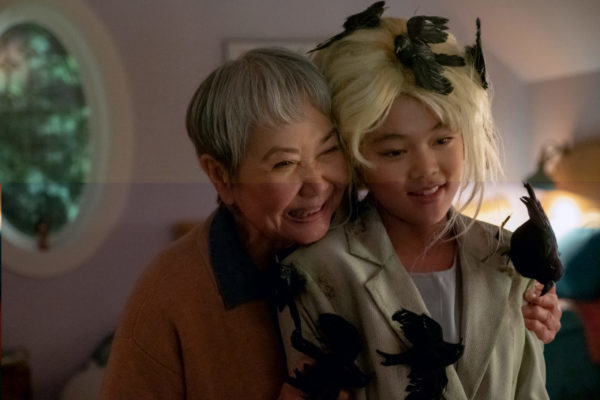 The episode opens with Claudia (who is narrating this episode)picking out an outfit and talking about art, fashion and babysitting, her three favorite things. She is in class when her crush Trevor Sandbourne compliments her art. She plays it cool as they discuss their art projects. He asks her about the dance with Stacey quietly squealing in her background. She tells him she hasn’t decided if she is going and he says maybe he will see her there.

At the meeting, Kristy demands to know if he asked her to the dance when Claudia (as narrator)says Kristy has a lot of talents, but subtlety isn’t one of them. She reiterates the conversation, saying he basically asked her and they will both be there.

Stacey says that he isn’t the type to show up with a corsage because he is more sophisticated and artistic.

Mary Anne asks if she is going to dress up. Claudia had a troll doll costume planned, but now thinks it is too babyish. Kristy says what is babyish is a dance (which Claudia wasn’t even asked to for real) where it allows boys to be disappointing again and girls making excuses for them.

Stacey asks Mary Anne if she is going because Logan may be there and they always stare at each other at the library. Mary Anne denies this and says her dad won’t let her go. She says he is worried about the phantom caller.

Stacey asks what that is and Mary Anne explains that it is someone who makes anonymous phone calls from inside the house.

At that moment the phone rings, scaring the girls. It is Kristy’s mom, needing a sitter for Watson’s kids. The girls say it is the night of the dance and besides, Elizabeth and Watson seem to call a lot, hoping that Kristy will babysit. Kristy gives the job to Mary Anne. Claudia asks if this means she is going to the dance and Kristy says she would rather get head lice….again. Claudia snarks that she gets it a lot.

Claudia (as narrator) says she is also good at cooking. She loves cooking with her grandma Mimi, who is her favorite person. They talk about Trevor and Claudia says she wishes her parents understood her the way Trevor’s parents understand him. Mimi says that no one at her age feels like parents understand them….and that is why they have grandparents. She also thinks that Trevor is out of his mind if he doesn’t like her.

She then asks about Claudia’s other classes, which then cuts to the family eating dinner. Claudia’s dad says he thought this year was going to be different and that this year was supposed to be a clean slate for her.

Claudia argues that she isn’t failing. Her mom says her algebra teacher called to make sure she is prepared for her quiz and reminds her she needs to take school seriously. As her parents lecture her, Claudia (as narrator) says this lecture has been happening since second grade.

Janine suggests that they use the dance as motivation to do well on the quiz. If she fails, no dance. She also admits she heard the plans about meeting Trevor, causing Claudia to accuse her of spying. Janine says she misplaced her noise cancelling headphones. Her parents agree to this plan and thank Janine for being goal oriented. Claudia internally snarks that Janine ruined her life.

Mary Anne heads home to an empty house….or so she thinks. Her dad is waiting in the dark, upset that she was home twenty minutes late. He lectures her about what can happen in twenty minutes. She apologizes and he accepts her apology…..but takes away her ‘fancy’ phone because she didn’t call. He instead gives her an old phone to use instead.

At lunch the next day, Stacey tutors Claudia when she gets distracted by Trevor. They squeal, but are interrupted by Kristy and Mary Anne. It turns out Mary Anne is also grounded from her sitting job and now Kristy has to sit for Watson’s kids. She asks Claudia and Stacey if one of them want the job, but neither of them want to miss the dance.

Claudia can’t understand why Kristy is so upset. She says she is running a business and Mary Anne is bring unprofessional. She then rags on Mary Anne’s dad, causing Mary Anne to ask what she knows about normal dads. She tries to apologize, but both girls storm off.

Claudia (as narrator)says she never saw them fight before, but now she has to think like a mathematician, not a marriage counselor.

As Claudia is at her locker putting on glasses, Trevor runs into her, saying he can give her a ride to the dance. He compliments her glasses and he walks away….as she squeals. She heads to class to take her quiz.

Mary Anne wants to apologize to Kristy, but cannot call her due to not having her other phone. She tries to signal her using a flashlight, but no avail.

The next day, Claudia discovers she failed her test. She talk to Stacey, who is also upset because she will be at the dance alone. She convinces Claudia to take a picture of her own test to text her parents so she can pretend she passed.

Claudia isn’t sure what to do, so she heads to the art room, where Trevor is working. It turns out he is struggling with making his dad proud. She tells him to paint what he wants, and he says she is special and kisses her on the cheek.

Claudia texts her parents Stacey’s test because there is no way she is missing the dance now.

Kristy is at Watson’s preparing for her babysitting job. He and Elizabeth are dressed as mice for their party. He gives her a tour and introduces her to Andrew. Elizabeth admits he is trying too hard but he just wants them to like each other, especially Karen,  who is dying to meet Kristy.

Watson says it is bedtime for Andrew, who hugs Kristy goodnight. Karen comes out and demands cookies for her doll’s wake.

Claudia gets ready for the dance when Mimi comes in, saying she looks good and she is proud of Claudia for passing her test, but more for being her Claudia, which is more than enough for her.

At the doll wake, Karen puts her doll in a box.Kristy asks is she wants to say a prayer, but Karen says her doll is an atheist.

Claudia comes downstairs to her parents saying how proud they are of her. Claudia’s mom wants to see the test, which leads to Claudia telling the truth and being punished from going to the dance, because consistency is key (according to Janine). She also says she she isn’t Janine and want to focus on her stuff. They tell her that all they want her do do is try.

At the dance, Stacey gets a text from Claudia telling her not to worry and everyone wants to be her friend. She also wants Trevor updates.

Karen and Kristy watch the phone ring until Kristy finally answers. It turns out it is Mary Anne on her ’mouse phone.’ She apologizes and tells her the Phantom caller was caught. She also tells her about Karen and that Watson has frozen Snickers bars in the freezer downstairs and she should start making an an effort with him.

The girls hang up and Kristy and Kane decide to bond over Snickers bars.

Back at the dance, Stacey feels out of place in her Marie Antoinette costume. She sees her art teacher Mrs. Johansson, who introduces her to her wife as Charlotte’s favorite babysitter. Stacey wonders who is babysitting Charlotte.

Claudia spends the night painting Mimi when she gets a text from Stacey saying that there is a competing club called the Babysitters Agency. The episode ends with Claudia telling Mimi they have some competition.