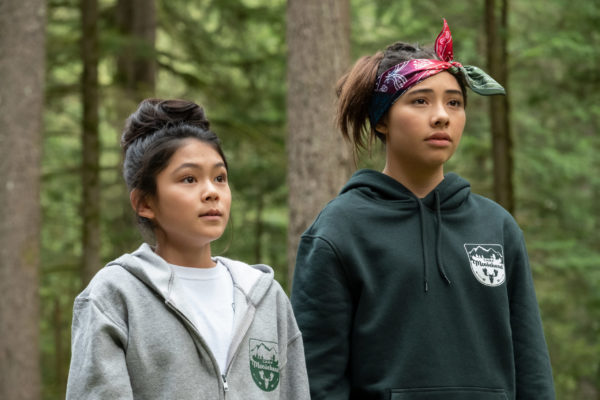 The season finale opens with Stacey in the infirmary for the worst case of poison ivy they have seen in years. Stacey is upset because it is opening night. The nurse gets more compresses when Mary Anne comes in and freaks out about Stacey….because the play is now in jeopardy. She tells her she looks like she has leprosy and the lead cannot have leprosy.

Dawn runs in, saying Claudia is a prisoner and they need to have a revolution. Via FaceTime, Claudia says she needs more Cool Ranch Doritos.

Stacey complains about being itchy. Kristy declares an emergency meeting of the Baby Sitters Club. At that moment, Laine walks in with poison ivy and says this curse is real. The nurse makes everyone leave, except for Laine and Stacey. Laine wants to talk, but Stacey is having none of it.

Karen looks at them through the window outside and says she must reverse the curse.

Mary Anne lets the cast and crew know what happened. Adam volunteers to do the light board, while Logan and Kristy suggest Mary Anne do the leading role. She is hesitant but quickly agrees. They realize Karen is missing and since there is no time to spare, Vanessa takes her place while Kristy, who has been looking for purpose the entire time, goes to find Karen. Mallory and Jessi volunteer to help where needed.

Dawn leads a lie in as a peaceful protest to change the unfair payment system. Meany walks by and Dawn thinks she is there to negotiate. However, she is only there to go to her car and to tell them that they are also remanded to their cabins for breaking the rules until further notice….or until she is back from the dentist.

One of the girls asks if this means that they will be missing afternoon activities. Dawn says that won’t happen if there aren’t any. She thanks her sister in arms and runs off.

The nurse brings in a TV for Stacey and Laine. They agree on Days, but then go back to not talking.

Kristy, Jessi and Mallory go to look for Karen,but discover she snuck out. They realize this has to do with the curse and go to find her. Mallory goes into character, but Kristy tells her not now.

Mary Anne is at play rehearsal and practices with Logan. She says they should save the kids for the performance. Vanessa begins to rhyme, Adam wants a bathroom break, so Mary Anne tells them to take five.

She tells Logan this is a disaster, but he says she is doing amazing. She calls everyone back to work.

Dawn sneaks into the office and makes an announcement that they should go on strike by not doing activities. She then breaks Claudia out of her cabin.

People walk out of rehearsal, upsetting Mary Anne. Vanessa tells her (in rhyme) that she is staying.

Kristy, Mallory and Jessi continue to look for Karen. They find an old cabin where the hermit allegedly lives. Kristy freaks out and babbles about if it is a hermit or he-mit when the door opens, scaring all the girls. They go into the cabin and see it empty. Kristy is worried about Karen, but Mallory says maybe she ran away to reset like Byron does for his anxiety. Jessi finds food from this morning and thinks it proves Karen was there. They think maybe she got more food and continue to look for her.

Dawn and several campers continue with the protest, only to be made fun of by the CITS. Dawn says everyone who doesn’t want a confrontation should leave. Everyone stays, making her happy. David Michael says he will also help, earning him a hug from Dawn, which he happily accepts.

Mallory, Jessi and Kristy finally find Karen at the bus stop. She says she is having trouble fitting in and thought fixing the curse would help, only to realize there was no curse. She is also sad David Michael only sees her as a stepsister. Mallory and Jessi say they understand how she feels and think of her as a friend. Kristy says she wants her to stay and that she sees her as a real sister. They hug it out. Mallory says Vanessa will get her part if they don’t hurry back, so Karen says they better go back NOW.

Laine and Stacey bond over their soap.  Laine apologizes to Stacey but says she also felt shut out and wonders why Stacey didn’t tell her what was going on. Stacey says she was scared and she didn’t know who to trust. Laine says she was her best friend and should have told her hat was happening. She says she is glad she has new friends that are awesome and the girls make up.

Dawn’s protest continues. Mary Anne confronts about the play and they both share reasons as to why their event is important. They agree to a compromise and each of their things makes them the best version of themselves. Stacey and Laine walk by, wondering if they crossed a picket line. Laine says it is a picket suggestion and now they need to get butts in seats for Mary Anne.

The show goes on at the same time as the protest. Meanie says she has enough and that if this doesn’t stop, she will shut down this session and remand them in their cabins. Kids begin to walk away, while Dawn and Claudia are called to Meanie’s office. The rest of the BSC join them, but not before Mary Anne kisses. Logan. Even though the play is important, being with her friends is more important.

Claudia and Dawn talk to Meanie, who understands their reasonings….but says they must be sent home. Kristy bursts in to tell her about Karen and that people need to pay more attention to the kids.

The girls become CITs and are thrilled with the changes in everything, including more play nights, free art classes and other fun activities. The kids tell them to long live the revolution while Dawn says long live the BSC. It also seems like she and Meanie have come to an understanding. Another girl talks about a liability with horseback helmets. Meanie tells them to talk to the CITs.

The episode ends with Jessi and Mallory telling the BSC how impressed they are with them. The girls invite them to be in the club as junior members, which they happily accept. They all take a picture together by the Camp Moosehead sign and have a group hug.