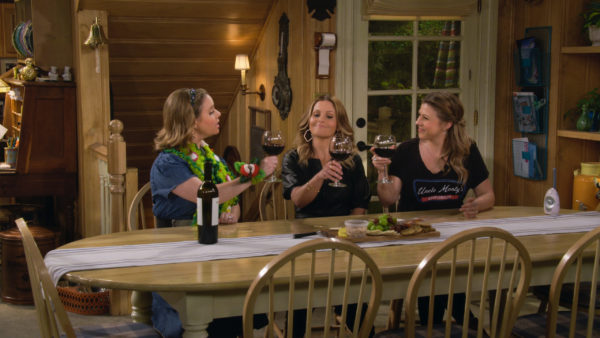 The episode opens with DJ on the phone, bragging about how Max skipped a grade and is now in middle school. Stephanie and Kimmy mimic her. She hangs up when the person on the phone (her dentist)has to do a root canal. Steph wonders if she ran out of people to brag to and DJ just says she is proud. Steph says there is proud and then there is whatsoever she is doing.

They discuss Max being with older kids, Steph says she was lucky because DJ and Kimmy were immature. DJ denies it and Kimmy proves her point by spelling ‘booger’ with her Alpha-Bits.

DJ thinks it will be fine since Max was born a 40 year old. Kimmy says try 80 and mimics him telling her how quickly the days pass by….and gave her a dollar.

Jackson and Ramona come downstairs and DJ asks why they are up on time. Jackson says Max was up since dawn exfoliating. Ramona says he made fun of her moisturizer.

Max walks in and greets everyone in a suit and carrying a briefcase. DJ comments on him choosing the three pice suit and he says there is no second chance to make a first impression.

Jackson does an impression of Barack Obama, which he did in middle school.

Ethan walks in and comments on the back door always being open as well. ramona thanks him for driving them to school and he says he could not wait to see her.

They kiss and Jackson says it is too early for that.

Steve, Steph and Fernando are in the sandwich shop.Jimmy says they are probably wondering why he called them there. Fernando says he isn’t and Steph is there for the free sandwich.

Steve says they have a problem. Fernando asks if it is about the possums in the kitchen and Steve shushes them. He goes on to tell them about the annual sandwich eating contest, but neither of them know what he is talking about. he reminds them to read his blog Meat and Feet.This grosses Steph out and she pushes away her plate.

Steve says Uncle Monty always won the contest until a competitor named Berkowitz came along. Steve says one of them needs to compete against him to rewin the trophy and glory.

DJ is waiting at the door with cookies for Max when Kimmy walks in. She steals a cookie and says it is stale. DJ says it is a biscotti and they are for Max and their annual first day of school Snack Chat….complete with a banner.

Max comes home and is disinterested in talking. The ladies are worried, but DJ says Jackson went through the same thing and Kimmy uses a bunch of teen speak in agreement.

Steve and Steph host a sandwich eating contest with Jackson, Ramona, Matt, Kimmy and Fernando joining them.They all think they can win, but at the end it is Ramona who ate the most, surprising everyone.

The next morning, DJ gives Jackson his lunch, but he says he cannot look at another sandwich. She thinks it is because he is full, but he says that sandwiches represent his failures. Steph says DJ represents hers.  Max comes down in a t-shirt, shorts and a backwards hat. Steph calls him basic American bro and DJ tells him to change. He says he is ‘rocking this look baby,’ and says he is in middle school now, so no more vests.

Matt comes in, wearing the same outfit as Max and high fives him.

Max asks for sweatpants, which confuses DJ. He leaves for school and Matt says he likes this kid. DJ tells him to go wait in the car.

Kimmy and Fernando sit Ramon down and tell her she inherited the competitive eater gene from both sides of her family. She thinks this is a good thing and can be used for the greater good. They train her Rocky style to prep her for the contest.

On contest day, Steve and Kimmy discuss the change in Max. He not only changed his look, but is now taking wood shop and telling fart jokes. Steve asks how DJ is handling this and Kimmy says she is buying him sweatpants and questioning her decisions as a parent.

The contest is about to begin as Ramona and Berkowitz face off. Eathan shows up to support Ramona and it causes her to freak out. She runs off and Berkowitz thinks she forfeited, saying he won. Steph puts him in his place and has a woman to woman chat with Ramona. She is worried about what Ethan will think seeing her eat and they discuss how women are given mixed signals on how to act. Steph tells her not to worry about what Ethan thinks and to eat like a girl.

The contest is a close call, but Ramona wins the trophy. Ethan thinks she is amazing, everyone is proud and Berkowitz storms off. As everyone is celebrating, Fernando tells them to exit due to. Not-a-possum.

DJ and Kimmy discuss the changes in Max. Kimmy reminds her of the field trip where they became friends. They talk to Max, who is tossing out his old clothes. They explain how everyone made fun of Kimmy and her bacon and eggs scarf. No one wanted to sit with Kimmy, but DJ did and wanted to know who the unique girl was. She is glad Kimmy wanted to be herself and says Max should as well.

Max explains how the kids at school called him a Young Sheldon extra….not even the lead. Everyone laughed and he had to eat lunch alone. He never cared about being different until now. DJ wants to talk to their parents, but Kimmy says kids like them were made to stand out. DJ promises he will find his people, which makes Max feel better and get his old clothes out of the garbage.

The episode ends with the ladies toasting their children. Danielle begins to cry, so Steph gets her, but not before she grabs her wine.