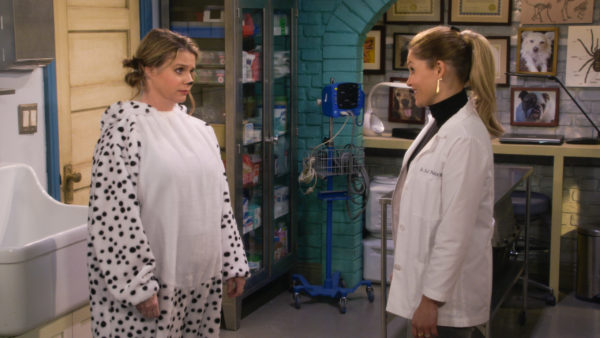 The episode opens with Jimmy, DJ and Fernando preparing for Stephanie and Danielle to come home from touring with Lisa Loeb. Jimmy has rose petals, champagne and a bubble bath for her upstairs. DJ thinks it is sweet and is excited to use her shop vac to clean up the mess from the rose petals later.

They hear the door and go to greet her with confetti, only to see Kimmy walk in. She says she needs her confetti gun and giant shoes, but everyone tells her it is a party.

Steph walks in via the back door and Fernando asks her if she knows how surprises work. She is happy, but wonders why they are spoiling her. They say they are happy for her and wanted to welcome her home.

DJ tells her there is a bath ready and that the rubber ducky was her idea. She is touched and gives Jimmy an empty bag or airline peanuts.

Ramona, Max, Tomme and Jackson are eating breakfast when DJ comes into the kitchen, excited for flea week….where for a reasonable fee, they get rid of fleas. Max asks if she is going to say that to anyone and she says not anymore.

Jesse and Pamela walk in with him screaming into the phone, saying a crime was committed and it will haunt Pamela for the rest of her life. DJ asks if she should call the cops or Ghostbusters. Jackson asks if they knew the movie had a version with men.

Jesse says Pamela got bit and she shows off her band-aid. Ramona takes her to get candy from her secret stash. Jackson asks if they heard this and Max says it is her drawer.

Jesse continues to freak out and wants to find out who did it so Pamela can bite the kid back. DJ says it is not done like that anymore. Jesse says it is because of recording cell phones, but DJ explains they don’t teach kids to fight back anymore, they let the teachers handle it. Jesse continues to argue fighting back worked with Michelle.

Max says the 90s sound like the dark days. Jesse is hellbent on fighting back, even though DJ gets him to admit Becky (who is in Nebraska) would tell him not to do this. He gets Tommy to agree, even though he is making faces behind his back.

DJ goes to work singing….but there is no Janice. It turns out she is sick and they are super crowded. Matt asks her what to do when Kimmy walks in with lunch. They get her agree to be a receptionist, even though Matt thinks it is a bad idea, epically when she hangs up on people and eats dog treats.

Steph is eating in the kitchen when Fernando walks in, asking her if she is eating watercress salad She says it was made special by Jimmy with light dressing. Fernando says he is considerate and Steph agrees. She says she is as well and is concerned when Fernando doesn’t say he agrees. He then points out her shortcomings and times she forgot things with Jimmy. She says she is a jerk and is determined to fix it. She says she used to things for him but stopped when she got too busy. As she ponders what to do, Fernando cons her into giving him her salad.

Jesse gathers Ramona, Jackson and Max together with Pamela. His plan is to have a play date with the kids in his class, give them cookies and match the bite marks against the one on Pamela’s arm. They want to know why it is at the Fuller house and he says he doesn’t want a biter to know where he lives.

Max still doesn’t know why he is there and Jesse explains he is solving the mystery of who bit his kid.

Pamela’s classmates arrive, including Finn and his dad Ben. The dads have a old school vs new school rivalry, which Jesse won’t let go of, even though Ben tries to butter him up by complimenting his music.

At the vet, DJ is annoyed with the changes Kimmy has been making to the filing system and throwing a bark mitzvah. DJ says it is their busiest day on Saturday, so they cannot have the event. Kimmy says she canceled all the appointments and thinks the party will be good advertising. DJ looks annoyed and like she regrets hiring Kimmy.

Steve comes up to pick up his dog when Matt comes out asking about the party. Kimmy says the evite worked. Steve gives a yes, while Matt is annoyed and says they are busy enough already. DJ says it is good advertising and Matt goes back to one of the exam rooms.

Steve and DJ talk about how Kimmy is screwing up. DJ says Kimmy is her best friend and she cannot get rid of her.

At that moment, Steph calls, asking for advice on treating Jimmy better. DJ says to make him dinner…without the car through the kitchen.

The play date continues and the older ones comment that it is hard to take cookies from little kids. None of the bite marks match either, causing Jesse to shame their detective work. Max says they are working free and against their will.

He offers Finn a cookie when he realizes he didn’t eat one. Ben says that is because he knows better than to eat processed sugar. Jesse offers an apple slice and pretends it is organic for their sakes. However, he says it is NOT organic once Finn takes a bite and goes to compare the bite mark against the one on Pamela’s arm. She is in the kitchen with Steph, who is cooking for Jimmy.He makes fun of her and she picks on him for snatching cookies from kids.

He check the bite marks, says it is a match and begins screaming at Ben. He says Finn does not have a history of biting. He then says it couldn’t have been him because they were at Disneyland when Pamela got bit. He then freaks out over eating a churro and supporting the company.

Jesse wants to know the identity of the biter when he sees Pamela biting herself. She was doing it for the band-aids and he says next time just ask for one. She says okay and fun’s off to play.

Jesse apologizes to Ben, who insists on hugging it out. Jesse says this is why he never called him.

Steph gives Jimmy the special dinner he cooked after he freaks out, thinking someone was dying or another tragedy occurred. He is excited about the meal, or zignama, like his word jumble says. She even found the shirt he was wearing from when they first kissed and washed it for him…but accidentally shrank it, like she did to DJ’s sweater as a kid. He tries to wear it, but no avail.

She makes him red velvet cake, which gives him an allergic reaction due to the beets she used to color it. He still tries to eat it because it was made from love.

DJ is overwhelmed at the vet clinic and tries to find Kimmy to help. However, she is outside doing advertising. DJ is upset, but tries to cover for her when Matt comes out looking for her. They agree it isn’t working out with Kimmy and he says Gia owes him twenty bucks because DJ finally said he was right.

The ladies talk and agree the job is not a good fit for Kimmy and hug it out. However, the happy moment is short lived because Steph calls to say Jimmy is going to the hospital due to the allergic reaction.

Jesse and DJ both come to the hospital. Steph says Jesse didn’t have to come, but he says he needed to get away from the play date and that he was an ER Doctor in a past life.

Steph says he also broke his toe when she broke a chair to help him. Jesse says she is literally loving him to death. She says she is trying to make up for being so busy lately and failing. She thinks she isn’t meant to take care of others, so Jesse and DJ remind her of all the ways she has helped others in the past.

Jimmy comes out to say his life is better because of her and they kiss. DJ and Jesse think they should leave and jet off.

The episode ends with the ladies and Jesse eating the cake Jimmy can’t have and toast to him. They all agree Jimmy is lucky to have Steph, while Kimmy says she is lucky to have DJ….and her bark mitzvah job that has been moved to the client’s house.

Jesse admits he was wrong in how he handled things and admits he has to change his parenting style. DJ says his actions make him who he is and he says he is perfect.