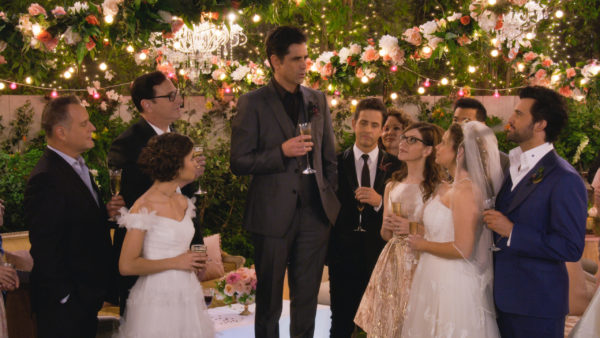 The FINAL episode of Fuller House begins with the gang returning home from the rehearsal dinner. DJ says it was a success. Stephanie agrees, saying it was better than the last one because Kimmy and Fernando didn’t do their kabuki dance.

Kimmy says this might be the rare wedding where someone actually gets married.

The guys come in and Steph apologizes for leaving them behind. Jimmy says someone had to stay for the end of her dad’s speech. Jackson asks if it actually ended.

Danny walks in with Joey and asks where everyone went because he ended up singing Butterfly Kisses to the busboy. Joey says he pulled the fire alarm to make it stop.

DJ says there is one more thing in the binder left to do. Steph asks if it is frisbee-ing the book out the window. Max thinks it is a bonfire.

The correct answer is get gorgeous and get married! Fernando quips that he just needs to get married.

Tommy asks DJ to read to him, but Ramona offers, saying it might be the last time she can before she moves. Jackson yells at her for bringing up the move. DJ says she is in a bubble of denial with stories and wedding and pie. Ramona says moving again and DJ says what part of poking the bear does she not understand?

The three couples snack on one almond each when Jimmy realizes it is almost midnight and the grooms have to leave. Jimmy comes back for his phone and says he set his alarm at midnight so he knows not to look at her on their wedding day. The alarm goes off and he freaks out. The girls think they have nothing to worry about since it is a silly superstition….

Wedding Day! The venue was seized by the FBI for money laundering, tax evasion and terrible chicken Kiev. They explain that this is their wedding venue, but the FBI dude says no one is getting married there today, but a hearty mazel tov.

Joey, Jesse and Danny enjoy coffee and bantering. Danny feels old watching his daughters get married, while Jesse is proud Mr. Jordache made a quality product because he can still wear his middle school jeans.

Joey is proud of how they all came together, both them and the girls. Jesse goes off to have Alejandro do his hair. Danny is shocked he is still alive. Jesse says his hair is what keeps him alive.

The girls walk in, saying the wedding is a disaster. DJ calls everyone in due to a DEFCON 1 or 4 disaster and explains the situation. Jimmy covers his eyes and says this is all his fault by triggering the curse.

Jackson asks if a curse was triggered and Steph says things fell apart in a curse like way.

The ultimately decide to get married in the backyard and everyone is given tasks to do…even Jimmy whose eyes are still covered.

They think it is fine, until their pastor cancels in favor of a celebrity wedding. Danny promises to find an officiant.

Danny and Joey come together to make it happen. Joey thinks they should do it, but Danny reminds him that the last time he did, the bride ran away….plus they are walking the ladies down the aisle.

Larry the annoying dad with the hots for DJ wants to stop the wedding.

Derek from Michelle’s class does a musical performance and even sings Yankee Doodle Dandy one last time.

Gia says she was married four times and can do this in her sleep.

Matt isn’t ordained but he has a puppet who is.

Danny says he has one more idea.

The hairstylist cancels, so it is up to Fernando to do their hair. He is excited to go back to their roots and do their roots. Kimmy reminds him he is also getting married, so he should also be excited for that.

Ethan and Rocki show up to help when Lola arrives. She says you cannot miss three weddings. Jackson is tongue tied.

Ramona introduces Lola to Ethan, while Jackson forgets to introduce Rocki as his girlfriend, upsetting her.

Ramona sends them outside and she yells at Jackson.

Popko, Ramona’s ex also shows up and knows Ethan as his Postmates guy. This time, Ramona forgets to say Ethan is her boyfriend.

Fernando is dong hair when Jimmy comes downstairs with a paper bag on his head, warning him about seeing Kimmy before the wedding….even though it is already too late. He tells Fernando to put on a blindfold, despite the fact that he is cutting Kimmy’s hair. He complies, scaring the girls.

Jackson and Lola fill Steve in on the ex situation and he says it is like a CW drama )like Riverdale.) He says nothing can beat the power of love and to apologize.

Ethan and Ramona make up, but Rocki isn’t willing to accept Jackson’s apology until he says he loves her. She feels the same and they make up.

The girls love how they look and share a tender moment with Ramona, who says she is happy for them….but no more crying because they will mess up their makeup.

Rose and CJ arrive and greet Max. He says Rose looks lovely and asks if CJ is her sister. They agree that he is a charmer and go outside. Rose says she wants to see if Steve says I do, because it is not his specialty.

Danny sees Vicki, who says she is thrilled for the family and they are glad they remained friends.

Gia asks Matt if he is going to object and he says no, but Oliver the puppet is another story. Rocki says it is starting.

The men walk the girls down the aisle. Once they are sitting, Jesse asks Danny to add his name to his gift. Danny says he paid for the wedding and he says that is good.

Joey asks about the minister, who is none other than Joey McIntyre. The girls are thrilled and Fernando says he would kill him if this wasn’t so touching.

Joey McIntyre says that he only got ordained ten minutes ago to do this for his super fans.

The couples each say their vows, which get Joey McIntyre’s approval. He says he thought Please Don’t Go, Girl was romantic and announces each couple man and wife.

Lisa Loeb sings as they walk up the aisle as married couples and as they celebrate the wedding.

Joey, Danny and Jesse all give toasts.

Lola, Ramona and CJ all catch the bouquets.

After the wedding, the girls eat cake in their PJs. They reflect on the day and realize the denial bubble has been popped. They say they should go to their husbands but continue to eat cake.

The kids all say goodbye…..and Max reminds Ramona she owes him seven dollars. They hug, say they love each other and start moving. Max says she can Venmo him the money.

Everyone is in the living room, ready to say goodbye.DJ says they came into her life at her lowest point and helped her live and love again. She now can set them free and live their own lives. She cries as she tells them what they mean to her.

There is a group hug and everyone leaves….but not before there is more group hugging.

The girls have one more she wolf howl before they leave as well.

DJ locks the door and stands in her living room alone when there is a knock at the door. It is Kimmy and Steph, asking if they can stay after all. They cannot imagine being without each other, especially Steph, who is pregnant. They cry and hug her, calling it a miracle.

Kimmy says they can stay and everyone comes in, with more hugs as the episode and series comes to a close.