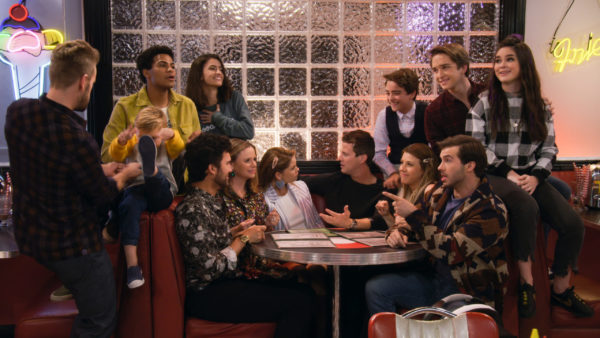 The episode opens with Steve and DJ in the kitchen drinking coffee. Fernando and Kimmy walk in with pastries. DJ suspects bad news when Jimmy and Stephanie come in with a breakfast pie.

Steve is enjoying the food when Kimmy and Fernando reveal they are moving to Palo Alto to open the new sandwich shop. Steph and Jimmy are moving their family closer to the original store location.

DJ freaks out and eats the pastries, while Steve wonders why they aren’t working. DJ thinks the pie is broken.

Jackson plays magic tricks with Rocki, Ethan and Ramona….badly. Ramona says he is a bad magician, but going to do great in Pippin. He said he could not have done it without her.

He says he helped her with everything from the steps to accepting flowers. Rocki snarks that she now has to get him flowers.

Ramona reveals she is moving and not spending senior year with them. Ethan says they can make the long distance thing work. After all he drove further for Postmates to deliver a half chicken. It was a whole one,but it was a long ride.

Ramona is glad her family will be under one roof.

At that moment, Jackson orders a half a chicken from him, saying he is an emotional eater.

DJ says they should not focus on the moving, but instead on the wedding planning. Steph is glad this is national nightmare is almost over. Kimmy says she means she is grateful, but Steph sticks to her story.

The tasks left are: finding the something borrowed, the bachelor party for the guys and toasting to the end. DJ says she went one minute without thinking of the move and cries again.

The guys prep for the bachelor party, which will be at an axe throwing bar. DJ says he better come back with both hands, or at least the one she is putting the ring on.

At that moment, Max comes home from fencing class….with Jimmy mistaking him for an alien. Steve asks him how class went and he says he may be the best in his school’s history.

Fernando teases him about being a champion of a school next to a Quiznos. Max says it is next to a Jersey Mike’s and asks him what he knows about fencing.They snark back and forth and agree to a duel.

The ladies are in the basement, where they find Michelle’s bike. Kimmy says if she hasn’t come for it by now, she isn’t coming. They find goodies such as DJ’s lips phone, Steph’s Honeybee uniform, the earring Kimmy used to pierce Steph’s ears and a feather from Kimmy’s ostrich.

DJ and Kimmy pick the earring and ostrich for their somethings, while Steph discovers her mom’s wedding veil to wear.

They also find an old dance costume of DJ’s leading to some dancing and singing. Steph says it is no fun to make fun of her if she is going to enjoy it.

It is opening night and Jackson is sick. This means Ramona has to go on, much to Fernando’s delight.

Rocky goes to take care of him, while DJ says they may need to burn the couch due to his germs.

Max and Fernando begin their fence-off, while Ramona goes off to text her friends.

Steph shows Jimmy her mom’s veil and he asks her what her favorite memory was. She pauses and says there were so many. She quickly sends him to his bachelor party. He says goodbye and that he has to stop and buy axes. Steph tells him the place provides them and he says it is classier than he thought.

After he leaves, Steph holds the veil, looking sad.

Matt poses with his axe then throws it bullseye adjacent.

Steve throws several bullseyes, impressing people watching. However, Kurt, the one who holds the axe record is upset to see it disappear. His girlfriend even teases him about it.

Ramona is about to leave for rehearsal and asks Jackson if there is anything he wants her to tell the cast. She goes in his room and see he is faking being sick. She thinks he doesn’t want to go on, but he wants her to have one last play before she moves. He says she is his sister and wanted to make her happy. However, she tells him to quit being a butthead and do the play.

Fernando and Max continue to fence-off throughout the house, only stopping to hide from a singing DJ. Ramona and Jackson ask them to join them for milkshakes later, but they say they need to duel and vengeance is sweeter. Jackson tells Ramona she will miss this.

The battle ends with the two of them saying they will miss each other. Fernando cries and Max says that although Fernando drives him nuts, he gets him. They hug and share a tender moment together.

Steph is in the attic when DJ finds her. They both say they are there to clean, but Steph admits she wants a new something borrowed because she doesn’t remember her mom. She only remembers pictures and stories. She cries and says the veil reminded her of that. DJ cries with her and offers to help jog her memory. She says she loves taking care of her sister…even though she now has to reapply her makeup.

At the bachelor party, Jimmy gives Steve a bad axe shirt, which Matt says he would wear to Daytona Beach.

Kurt begins to hassle Steve for breaking his record. He calls him Paul Bunyan, which Jimmy thinks is genius, coming from a bully. Matt and Jimmy say Kurt has to fight them too, as does Fernando, who doesn’t realize it is a fight. The guys take turns defending Steve and telling Kurt how wonderful Steve is, causing Kurt to cry. He says he never had BFFS like this and his girlfriend comes by to take him home and make fun of him for crying.

The ladies are at an ice cream shop, hoping to help Steph remember her mom. It doesn’t work until a little girl orders a chocolate milkshake with whipped cream and two cherries. She suddenly remembers ordering that when she, DJ and their mom went to the ice cream place after dance class.

DJ asks if she is feeling better, and she says she is, even though she wonders if the little girl is a ghost version of her.

The episode ends with the jukebox playing Build Me Up, Buttercup, which was their mom’s favorite song. DJ thanks her mom for the visit.