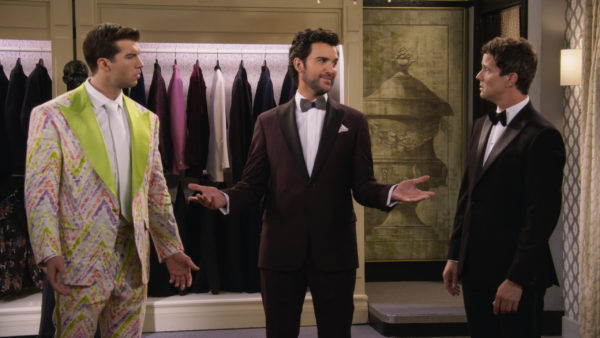 The episode opens with Jackson working on unfreezing Ramona’s laptop. She says if she cannot do it, neither could he.However, he fixes it, much to her surprise. She wonders how and he explains that he cleaned her browser history and did an update.

He then teases her about what is on her computer. It turns out she is a secret Bachelor in Paradise fan and she says she can quit whenever she wants….but cannot.

DJ and Kimmy come downstairs for breakfast. Kimmy asks what Ramona has and she says she is looking at colleges, including the Ivies. Meanwhile, Jackson has one from a blackjack place. DJ says it is for resident, and Jackson says that is him….he is also known as ‘occupant.’

Kimmy is concerned because Ramona wants to look at East Coast schools. Ramona is excited because the schools have great programs for women’s studies. Kimmy says she can study women in the Bay Area, including the two in the kitchen.

Ramona argues that she has to do what is best for her and DJ agrees that the kids are growing up and need to do what is best for them. However, she changes her mind when Jackson says he might not go to college. She tells him going to college allows him to figure out who he wants to be in life. She says she initially wanted to teach, but changed her mind when she decided she liked llamas more than commas.

Jackson says he doesn’t want to talk about it and leaves. DJ is upset and Kimmy says not to worry, she didn’t get into her top schools and now lives in her attic. DJ says at least Stephanie used her college money to drink her way through Portugal.

DJ sees a brochure from her alma mater California University and they decide to take the kids on a tour to get Ramona to go to school close to home and Jackson to go to college at all.

Kimmy goes to get her cheerleading uniform to wear on the tour. DJ points out she was never a cheerleader and Kimmy says she was never a rat king, Mrs. Doubtfire and a bunch of other characters either, so why is she pulling that thread now?

At breakfast Stephanie asks Kimmy if she is going with DJ to the tour and wishes her luck. Kimmy asks why and DJ comes down in her college cheerleading uniform, doing an old cheer. Steph says this is why. She then talks about her adventures while pretending to go to college and her love for Portuguese whiskey.

Steph turns down their offer to go on the tour, saying it is the first time in months she has no rehearsals, no baby and no talking to Jimmy about the light in the fridge. Kimmy says she wonders about that light too and tries to figure out where it goes.

Steph tells them she is relaxing all day using her meditation app. She heads to the living room, where Steve, Jimmy and Fernando are binging the Fast and Furious movies. She says they have tuxedo fittings and sends them away in a hurry.

Fernando offers to drive because he is a race car driver, but Steve says it is his fiancée who made the appointments. Steph settles in to relax.

At the college tour, the guide says they got asked to leave because of DJ answering questions. She embarrasses Jackson with her excitement, while Kimmy embarrasses Ramona by being impressed with squirrels.

DJ talks to Jackson, who is excited about the meal plan and pizza. She says the social scene in the school is lit and he is embarrassed again. she talks about her sorority and it turns out the tour guide is in the same one. DJ said it was the best one on campus, but the guide says a competing one is more popular now. They even stole the elusive Bronze Cap, which upsets DJ and makes her determined to take it back.

Kimmy says you don’t get stuff like this on the East Coast and continues to embarrass Ramona, who says she met her on the bus.

Steve was them to have a cohesive look but they cannot agree on which to get. Berta likes Steve’s best but each guy wants their own tux they are wearing.

They call Steph for help, but she hangs up on them. They decide to bring Max in…..and he is mad he was pulled out of chess club for this.

On campus, the gang crashes a sorority party, determined to get the Bronze Cap. One of the girls asks if they are a little too old to be there and Kimmy is flattered that they are only a little old.

DJ distracts them with limbo, which embarrasses Jackson again. She would be mad at his snarkiness, but says he sounds like a college student.

Meanwhile, Ramona is mistaken for a college student (while being another distraction)and asked to pledge DJ’s rival sorority.

Kimmy tries to get everyone out by saying there is a free Boy George concert. No one knows who he is,so Ramona tells her to say Billie Eilish, but Kimmy thinks she means Billy Idol. Ramona corrects everyone and clears the room so DJ can steal the Bronze Cap. Jackson actually thinks Billie is there and DJ tells him he should really consider college.

At the shop, Max snarks on the suits, upsetting Berta. She threatens to cancel all the orders, including the dresses for the ladies.

Jimmy freaks out and thinks they need new identities. He wants to be Fernando, who says being him isn’t as easy as it looks.

Steph is relaxing when she gets the text about the situation. She freaks out.

DJ gets the Bronze Cap, but sets off a security systems. She now has to go through lasers and avoid touching them because they will set off alarms. Jackson talks her through it and she is impressed with how much he knows about it. He is finally impressed with her and admits it was fun.

Berta says no dresses and Steph talks about what this day means to her. Berta is still not impressed, so Max decides to give a sincere apology in English and Russian. She decides to let them have the dresses and tuxes…but no hugs because she hasn’t hugged since the Berlin Wall collapse.

Everyone is happy, except Jimmy because Steph won’t let him wear his wild tux.

At campus, Kimmy and Ramona talk about college. Kimmy decides to support Ramona no matter what.

DJ and Jackson also talk about college when she gets a text from Beth the tour guide. She says the sorority pledge class has doubled. She makes Jackson text back with emojis.

Jackson says he definitely isn’t going to college. DJ is upset until he explains he is going to school to learn about computers coding instead. He says people from the program work for Google, the FBI and Netflix. She says she is proud and agrees to support him.

Steph comes in and asks about the tour. They tell the story and she thinks they are joking and ‘jokes’ about the near wedding disaster. They laugh as the episode comes to a close.