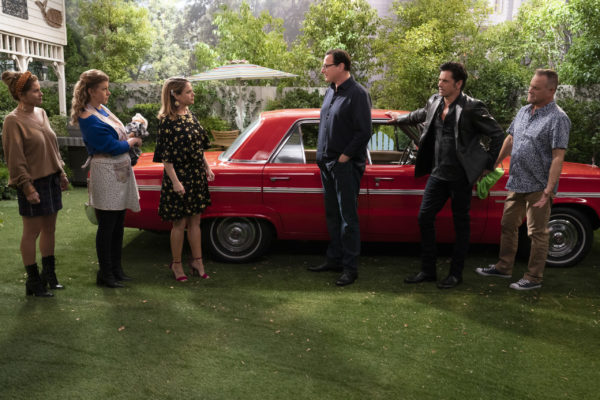 The episode opens with  Stephanie cooking for Thanksgiving and talking to baby Danielle. DJ walks in and tells her to enjoy it now because when Danielle starts talking for real, she will never say what she wants and proceeds to talk for Cosmo. Steph argues that Cosmo has a different voice and does her own impression.

DJ offers to help, but Steph insists on doing it herself so that Danielle can have her first taste of real food cooked by her. DJ still insists that she uses her special cookbook, but Steph says she would read Max’s Blue Bloods fan fiction.

DJ says it is a family book and wants her to sign for it. However, Steph has her own recipes she got online, causing DJ to say the ancestors are spinning in their graves.

Kimmy comes in and tells them to stop fighting. The girls insist no one is fighting and says it was Steph’s idea to do it. Steph tells her she should learn to read a room.

Kimmy says Fernando is going to get his American citizenship, so there should be no fighting….because that is not what America is about.

A horn honks, signaling the arrival of Danny, Joey and Jesse, who are bickering about Joey’s car. Kimmy tells them to not fight and everyone says hello.Danny holds the baby and asks if she is living up to the family name. Jesse snarks that she is talking nonsense and gassy, so yes, causing Danny to snark about his hair.

Steph compliments the car and it turns out it is Rosie 2, not Rosie 1, which Steph drove into the kitchen when she was eight. Joey says they do not talk about that in front of Rosie 2.

The family is gathered together, watching the parade and Jesse confuses Ed Shearan with a snowman. Jackson corrects him and Jesse says that Ed needs to get some sun.

Max tells them to be quiet when Hoda is talking and the topic turns to dinner. DJ tells them that Steph is cooking with new recipes, leaving everyone intrigued. Steph sends the guys to get the turkey from Uncle Monty’s. They quip that she s trying to get the rid of them and she quips back by asking if it just sounds that way.

The guys get up to leave when Kimmy arrives, introducing Fernando as an American citizen. Ramona and Jimmy are with them. Fernando begins his singing speech and guys decide it is a good time to leave, insulting Fernando.

The guys are getting the turkey when Joey pretends to be Rocky in the freezer. Jesse says that he is the worst Rocky ever, and he saw Rocky on Ice. They end up locked in the freezer with no reception.

Steve smuggles in a microwave for DJ, who is saving Thanksgiving and says that is a good title for a Hallmark movie. She is cooking her own food because she wants tradition. Steve says the salad Steph is making sounds good and she says he is on shaky ground.

The guys begin reminiscing about their lives and it accidentally gets out that Jesse and Danny initially didn’t want Joey living with them. He is very hurt and feels like his life is one big lie.

Steph is cooking in the kitchen when Fernando walks in, dressed as a pilgrim. She says this was not the turkey she needed when the rest of the Gibblers walk in, ready to perform. Steph asks if they heard from the guys, but the Gibblers say no talking until after the show is over.

The power goes out and the Gibblers accuse her of being a witch. She says it is a tripped breaker and goes upstairs to fix it. She asks DJ for help. However, DJ is being cagey because she is cooking. She distracts Steph by saying something downstairs is burning.

The guys try to make Joey feel better and tell him he is an important part of the family. Danny says it as just hard because of Pam dying and Joey being a crazy comic. However, Danny is thankful for them both, leading to hugs and tears.

As they hug, Jesse’s hair falls out and he says it is frozen due to his hair products. He refuses to be bald, so he breaks the window, unlocks the door and they escape, but not before they almost leave Jesse hanging.

Steph shows DJ her progress so far and DJ says she is proud. Kimmy comes in to stop more non existent fighting when Tommy and Cosmo come in with food on their faces. Steph realizes what DJ did and it finally causes a fight. Kimmy escapes with Cosmo.

Steph goes to find the guys and has to use Joey’s car. She ends up crashing into the house like she did when she was a kid, ruining the kitchen and her Thanksgiving meal. She sees the damage and hopes no one will notice.

Tommy walks in and pulls the ‘there is a car in the kitchen’ and open mouthed gape Michelle did in the original car in kitchen episode. DJ and Steve come in to see what happened and ‘oh my flashback!’ DJ worries over Steph, who says they will now need the back up meal.

They suddenly hear music and the Gibblers are performing Coming to America. The guys walk in and say they should of stayed in the freezer. They head to the kitchen and see the damage, causing them to freak out.

The family gathers in the living room to eat. As they enjoy DJ’s meal, Danny calls the insurance company, Joey says Steph will never see Rosie 3 and Steph apologizes. Jesse says he is glad he isn’t bald.

Kimmy says this is an odd Thanksgiving with a car in the kitchen, a kitchen in the bathroom and Fernando explaining America to people who lived there their entire lives.

Steve has DJ try Steph’s new salad, which was saved from the kitchen fiasco. She and Max both like it and she agrees to add it to the book. She talks about family and traditions and agrees to add new ones.

Danielle cries and Steph feeds her a bite of her mom’s pumpkin pie….or purée. Steph says she doesn’t need to know that and Danny says that lying to babies is yet another tradition.

The episode ends with everyone wishing each other a Happy Thanksgiving.