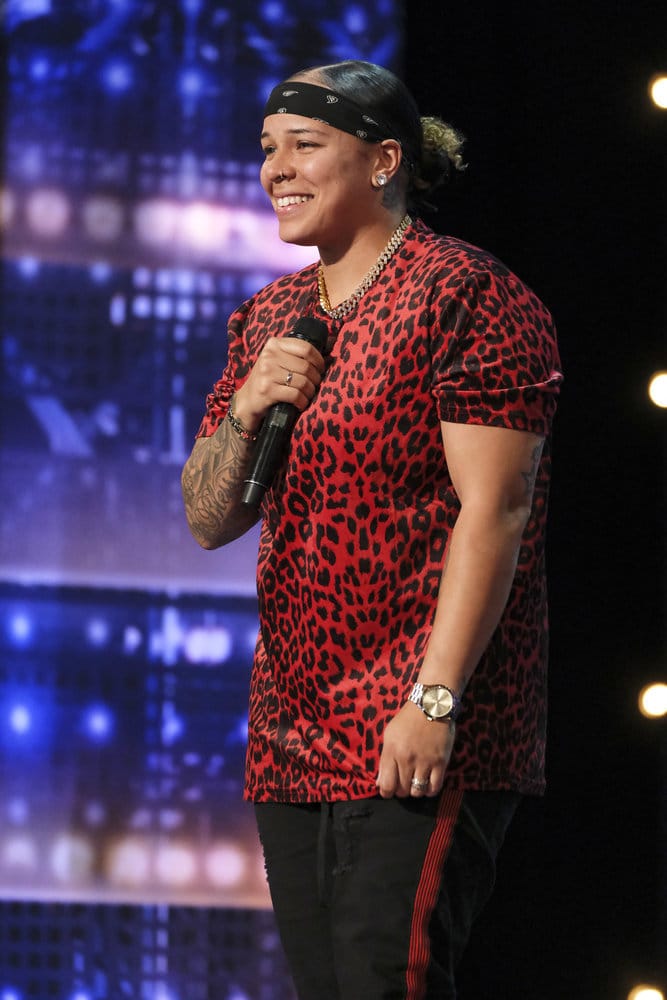 It is the third night of auditions for season fifteen of NBC’s America’s Got Talent and it promises to be quite an interesting season. Sofia Vergara joins the judges table, along with Simon Cowell, Howie Mandel and Heidi Klum. Terry Crews hosts.

Emerald Gordon Wulf: This is a young girl who is a contortionist. She does her routine to a Meghan Trainor song on a vanity. It is…..fascinating to watch and I am in pain just looking at her. However…..I am in awe.

It is no surprise she makes it to the next round.

Bank of Harmony: They are a group of guys who are a singing quartet. They are off key and fail to impress, so they are sent home.

Resound:They are a singing trio that are so good they get everyone in the room singing and on their feet. Win or lose, they are going places. They are onto the next round.  Four yeses!

Amanda LeCount:She is a dancer who was always bullied for her weight. She is a BADASS. Get it, girl! Those splits had me in awe! Heidi buzzed her, but everyone else is on their feet. The judges give her some constructive criticism, but Simon and Sofia have faith in her. They say yes, as does Howie, who is on the fence.

After some rejected acts, we get down to business.

Danielya: What a powerhouse. She kind of reminds me of early Amy Winehouse. The judges are spellbound by her voice and sent her straight to the next round.

Marty Ross: He is an 80 year old comedian who jokes about aging. He gets a bit….racy, but he has everyone howling. He is onto the next round.

Celina: She is a security guard going into law enforcement. However, singing is her passion. She was bullied for her looks and wants to show the world there is more to her than that. Her voice can rival Mariah Carey’s. WOW. She gets a standing ovation….and four yeses. Simon tells her not to let a stylist go near her.

The Demented Brothers: This duo does a magic act that seems as if it gets messed up midway with some dude coming to give them a handkerchief….and then it comes out of pockets, ears etc. Simon is confused, but they are sent to the next round.

Shakir and Rehan: This act consists of two cousins from India who do an acrobatics routine. They are another one to get a standing ovation. I admit, I had to hold my breath because some of those moves had me afraid the younger one was going to get hurt. They are on to the next round.

David Rush: He plans to break the record of most t-shirts torn off in one minute. Terry volunteers to help and go up against him. No one is sure what to make of it…or what record he will break next…but it is a no. However, he did break another world record.

Cristina Rae: Her son is with her and keeps trying to come on stage, so they invite him there. She is doing the show to give her son a better life. WELL HELLO DIANA ROSS! This is the poster child for powerhouse diva! Simon makes her sing another song and she is just incredible….WOW.

HEIDI GIVES HER THE GOLDEN BUZZER!!