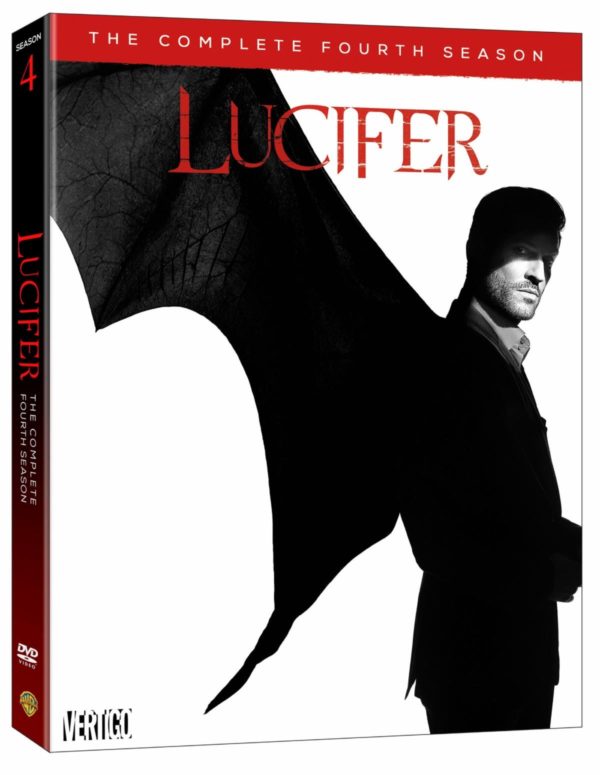 Lucifer season four is now on DVD to own! Check out more details below!
Your date with the Devil is soon to arrive, as Warner Bros. Home Entertainment brings you Lucifer: The Complete Fourth Season on DVD May 12, 2020. Put on your devilish grin as you indulge in all 10 hell-raising episodes from the fourth season and fulfill your deepest desires with tantalizing deleted scenes included in the bonus features. Lucifer: The Complete Fourth Season will be available at all major retailers and is priced to own at $24.98 SRP ($29.98 in Canada). Lucifer: The Complete Fourth Season will also available to own on Digital via purchase from digital retailers on May 11, 2020.
Lucifer: The Complete Fourth Season will also be available on Blu-ray courtesy of Warner Archive Collection. The Blu-ray release includes all the bonus features on the DVD and is also arriving May 12, 2020. Warner Archive Blu-ray releases are easily found at wb.com/warnerarchive and on your favorite online retailer sites.
Season Four sizzles with fiendishly clever comebacks. The charismatic, handsome Lucifer Morningstar returns resurrected after Season Three’s wicked cliffhanger. His unofficial partner in crime-solving and affairs of the heart, LAPD detective Chloe Decker, returns from an extended vacation – after she saw Lucifer’s devil face for the first time and realized he was, in fact, exactly the man he always claimed to be. And, finally, new to the series but not to the Lord of Hell, comes old flame and original sinner, Eve, whose charms are as tempting to Lucifer now as the serpent’s big, red apple was to her back in the day. Does she want revenge for her expulsion from Eden all those years ago? Or something else entirely? Personal demons get conquered and crimes get solved. But will things ever get right with Deckerstar? Only time and ten scandalous new episodes will tell.
“After the phenomenal #SaveLucifer fan campaign raised hell, the eternal wait is over for the loyal Lucifans,” said Rosemary Markson, WBHE Senior Vice President, Television Marketing. “Get ready to binge-watch all 10 episodes from Season 4 with hours of frighteningly fun entertainment and frivolous adventures and never-before-seen deleted scenes!”
The series stars Tom Ellis (Rush, EastEnders), Lauren German (Chicago Fire), Kevin Alejandro (Southland, True Blood), DB Woodside (Suits, 24), Lesley-Ann Brandt (The Librarians), Aimee Garcia (Dexter, Rush Hour), and Scarlett Estevez (Daddy’s Home), with Inbar Lavi (Prison Break, Imposters) and Rachael Harris (The Hangover, Diary Of A Wimpy Kid). Based upon the characters created by Neil Gaiman, Sam Kieth and Mike Dringenberg for DC, Lucifer is produced by Jerry Bruckheimer Television in association with Warner Bros. Television. Developed by Tom Kapinos (Californication), the series is executive produced by Jerry Bruckheimer (CSI franchise, Pirates of the Caribbean films), Jonathan Littman (The Amazing Race, CSI franchise), Joe Henderson (White Collar, Almost Human), Ildy Modrovich (CSI: Miami, Californication), Kristianne Reed (CSI: Cyber) and Jason Ning (The Expanse, Perception).
SPECIAL FEATURES
10 ONE-HOUR EPISODES
DIGITAL
The fourth season of Lucifer will be available on Digital May 11, 2020. Digital allows consumers to instantly stream and download all episodes to watch anywhere and anytime on their favorite devices. Digital is available from various retailers including iTunes, Amazon Video, Google Play, Vudu, PlayStation, Xbox and others.
DVD BASICS
Street Date: May 12, 2020
Order Due Date: April 7, 2020 (March 30, 2020 in Canada)
Price: $24.98 SRP ($29.98 in Canada)
Presented in 16×9 widescreen format
Running Time: Feature: Approx. 505 min
Enhanced Content: Approx. 8 min
2 DVD-9s
Audio – English (5.1)
Subtitles – English SDH
About Warner Bros. Home Entertainment Inc.
Warner Bros. Home Entertainment (WBHE) brings together Warner Bros. Entertainment’s home video, digital distribution and interactive entertainment businesses in order to maximize current and next-generation distribution scenarios. An industry leader since its inception, WBHE oversees the global distribution of content through packaged goods (Blu-ray Disc™ and DVD) and digital media in the form of electronic sell-through and video-on-demand via cable, satellite, online and mobile channels, and is a significant developer and publisher for console and online video game titles worldwide. WBHE distributes its product through third party retail partners and licensees.
About DC
DC is one of the largest English-language publishers of comics and graphic novels in the world and home to some of the most iconic and recognizable characters ever created. As a creative unit of WarnerMedia, DC is charged with strategically integrating its stories and characters across film, television, consumer products, home entertainment, interactive games and the DC Universe subscription streaming service. For more information visit dccomics.com.
LUCIFER and all related characters and elements are trademarks of and © DC Comics.