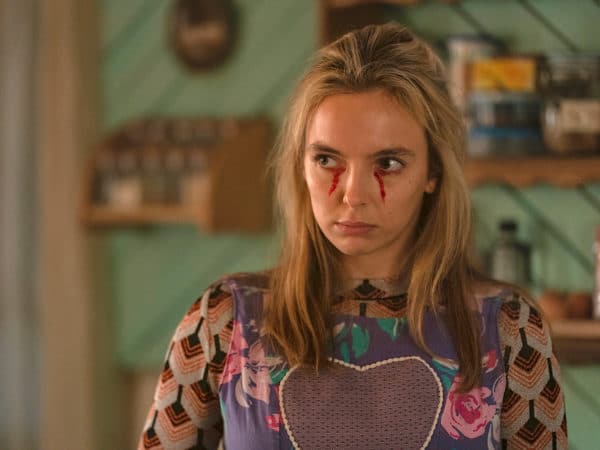 It is episode five of Killing Eve and Villanelle is finally home! She strides down a dusty street leading into a middle-of-nowhere village, enraptured by the familiar sights. But where exactly is this obscure location? “Mother Russia” of course! Villanelle arrives at a ramshackle farmhouse and, without any hesitation, lets herself in.
As she sits down at the kitchen table Villanelle meets the owners of this place, all of whom have no idea who she is and are baffled by her presence. There’s Bor’ka, a young boy with a passion for Elton John, Fyodor, his half brother, Yula, Fyodor’s suspicious girlfriend, and Grigoriy, the household patriarch. Villanelle doesn’t recognize any of these strangers, but suddenly she sees who she has been searching for, her brother Pyotr. The two long lost siblings stare at each other and we learn that all these years Pyotr thought his sister was dead.
Villanelle has found her home again, her family, but there is still one person missing. When she hears that her mother is about to arrive, Villanelle abruptly panics, frantically trying to escape, but it’s too late. She comes face to face with Tatiana, her mother, who tearfully embraces her. This reunion is very different from the others. Villanelle does not hug her mother back and her eyes flash briefly with loathing.
We learn some interesting details about Villanelle’s past from the following conversation. She had been placed in an orphanage and, as Tatiana explains, was presumed dead after her attempt to burn the place down.
After looking at some old photos of young Villanelle, the reunited family celebrates by playing cards and dancing to Elton John. Villanelle is tense and uncertain at first but finally gives in and joins everyone when they start singing to Crocodile Rock.
The next day, Villanelle finds Pyotr alone in the barn ferociously pounding an old sofa to pulp with a baseball bat. Her brother quickly explains that this is his “anger problem” to which Villanelle remarks that beating up people would feel a lot better than beating up furniture. She reminisces about their father, how he taught her to fight, was strong and funny, and on the whole was much better than their mother. This is the first time Villanelle reveals what she thinks of Tatiana, stating that her mother was “mean” to her as a child. Pyotr then asks if the orphanage had told her all those years ago that he and Tatiana had died. Villanelle answers yes, that she was told they had died in a car crash. We are left to wonder though if she is being entirely truthful.
The scene cuts to a rinky-dink diner where Villanelle and Pyotr are sharing an expanse of mouthwatering Russian dishes. This scene has a distinctively wholesome feel and Pyotr points out that the annual harvest festival will be that afternoon. The estranged siblings are still fighting about their mother, Pytor claiming that Tatiana is a good person and Villanelle hinting ominously that she’s controlling and manipulating. Her brother asks why she came to find them and Villanelle explains simply that she “had the hiccups.”

Later that day Villanelle learns more about her step-family. Fyodor and Yula remain petty and unwelcoming and she learns that they are both avid conspiracy theorists. Despite Bor’ka’s cheerful exterior, he is hiding a deep self-hatred which is only spurred by his failure to make good pastries for the fair.
Villanelle corners Grigoriy working outside and learns what he thinks of her mother. Her stepfather is understanding of his wife’s abandonment of Villanelle, stating that she had been going through a rough time and cries about it every night. Despite this, he alludes that he still doesn’t know everything about Tatiana’s past. Villanelle again reveals some of the hatred that she has for her mother. In her eyes, Tatiana destroyed Villanelle’s family and dumped her at an orphanage. At that moment the woman in question shows up, likely wanting to distract her daughter from learning more secrets.
We cut to the harvest festival in full swing. Villanelle is having a blast and most of her family are enjoying themselves as well. Grigoriy plays a massive game of chess, Yula hangs with her clique, and Fyodor tries to chat up women.
Bor’ka isn’t sharing in the festivities though. When he loses the annual pastry contest, his mother comes to sit beside him and says some inaudible words to the little boy which clearly upset him. This suspicious exchange is watched closely by Villanelle.
Throughout the rest of the festival, as she wins the dung throwing competition, listens to music, and sits through Yula’s terrible dance performance, Villanelle keeps a close eye on her mother. Though the woman seems to be enjoying the festival, her hooded eyes often glint ominously when she glances at her daughter.
As she rests with Bor’ka at the end of the night, the little boy tries to hit himself, ashamed and miserable that he didn’t win the money from the pastry prize which would have allowed him to go and see Elton John. Bor’ka also reveals that after the competition his mother told him that he was stupid and an embarrisment to the family. Finally Villanelle sees the woman she remembers, the manipulating sociopath who haunted her childhood and abandoned her.
With this realization, Villanelle determines to confront her mother. This is what the episode has been leading up. Was Tatiana a key figure in shaping Villanelle’s psychopathic nature?
That night Villanelle paints lines of tomato juice down from her eyes to make it look like she is weeping blood and tries to scare her mother. Apparently, this creepy little prank used to make Tatiana laugh, but she isn’t laughing now. Tatiana tells Villanelle softly that she needs to cut her visit short and leave. She states that Villanelle is not “part of this family” and blames her daughter for pushing her ex-husband away and destroying their family so long ago.
Throughout the entirety of Killing Eve, the origins of Villanelle’s psychopathy remain ambiguous. Was her twisted nature the result of trauma or did she inherit it. Now, as Villanelle is facing her

mother, her maker, we realize that it probably stemmed from a little bit of both. The wayward assassin is almost in tears, her voice trembling as she argues that it was Tatiana who made her like this, that she gets the darkness inside from her mother. Despite this display of pain, Tatiana remains aloof, watching her daughter with barely concealed disdain. Villanelle is perhaps the most vulnerable we have ever seen her and she can no longer take this cold rejection.
After making sure that Bor’ka and Pyotr, the only members of her family that she really cares about, are safely in the barn with enough money to “go see Elton,” Villanelle grimly turns on the gas, flicks on a lighter, and blows up the house. 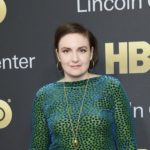 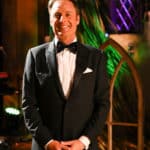