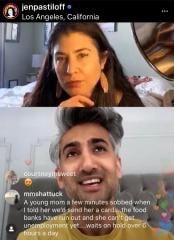 When author Jennifer Pastiloff posted an image on Instagram that simply said, “Do you have food to eat?” she never imagined what would happen next. “It was a literal question,” Pastiloff says. “I was encouraging vulnerability on my feed because I just wanted to help people.” Within hours, many in her fanbase of over 80 thousand followers mobilized to provide groceries to those who were running out.

One of Jennifer’s followers, Dayna Mondello, started a Go Fund Mefor the efforts after sending $300 in food supplies to a single mom in Florida. Powered by a group of 20 volunteers, Mondello and Pastiloffare now in the process of creating a nonprofit from the fund, called OnBeingHuman2020, which raised $12,000 in the first 24 hours and nearly $100,000 in the first month with a lot of help from Hollywood.

OnBeingHuman2020 provides $100 grocery cards to people who apply through the website (www.onbeinghuman2020.com). To raise awareness for the campaign, Pastiloff is hosting celebrity guests on her IGTV “Chat and Feed” series all who have been using their own platforms to help spread the good word about the fund and encourage donations.

Just a few of her recent guests include:

“What really moved me are the people who went on and made videos about it beforehand to tell people to donate and meet them on my “Chat and Feed” series,” Pastiloff says. She’s also helped the campaign go viral by creating the “Dork It Out Dance Challenge”, in which celebs such as Cheryl Strayed, Ron Pearlman, Allison Dunbar, and Rachel Platten have all busted a move and challenged their friends and fans to donate.