Actress Anna Kendrick, star of Love Life on HBO Max, has announced that new episodes will be released next week. Check out more news below.

On the heels of its launch this week and the strong positive audience response to its first scripted original series Love Life, starring Oscar® nominee Anna Kendrick, HBO Max today announced that the streaming platform is accelerating the release of the show’s remaining episodes to give fans more of what they’re watching. Next Thursday, June 4, episodes 4, 5 and 6 will be available to binge on HBO Max, and on Thursday, June 11, the final four episodes of the first season will be added. Originally, the streamer had planned to release one new episode a week following its premiere with the first three episodes.

“HBO Max audiences have fallen in love with Love Life. It’s wonderfully gratifying to see that fans have immediately connected to the show and we are accelerating the release of episodes to meet their demand for more,” said Sarah Aubrey, head of original content, HBO Max. “We are thrilled to see Love Life emerge as one of the top performers of all content on Max and we love to be able to reward viewers who started watching on day one.”

Love Life, a fresh take on a romantic comedy anthology series, features “an Emmy-worthy turn from Kendrick” (Decider, Joel Keller) and “should be the first thing you watch on the new streaming platform” (Glamour, Anna Moeslein). It has “a sharpness and a depth” (Vanity Fair, Richard Lawson), “the writing is sharp” (Uproxx, Kimberly Ricci), and star “Zoë Chao is a standout” (Entertainment Weekly, Kristen Baldwin).

The series comes from creator and co-showrunner Sam Boyd (In a Relationship) and is about the journey from first love to last love, and how the people we’re with along the way make us into who we are when we finally end up with someone forever. Anna Kendrick (Pitch Perfect, A Simple Favor) stars in the first season along with Zoë Chao (Downhill, Strangers), Peter Vack (Someone Great, The Bold Type) and Sasha Compere (Miracle Workers, Uncorked). 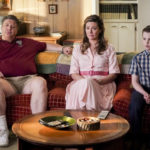