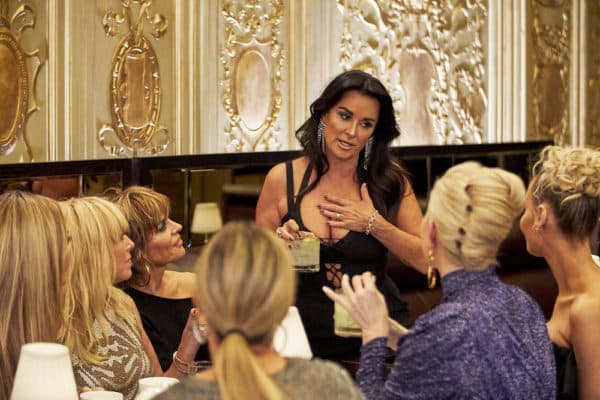 It is season ten, episode two of The Real Housewives of Beverly Hills.  Kyle Richards, Lisa Rinna, Denise Richards, Teddi Mellencamp, Dorit Kemsley, Garcelle Beauvais and Erika Jayne are back for another adventure.

– Dorit and her family move into a new house and deal with their financial issues. They admit they did face some problems, but are working through them together.

– Garcelle is also starting over without her ex-husband. She is ready to move on, but wishes she had someone. She also leaked an email to her husband’s co-workers exposing the affair.

– Lisa worries about her daughter Amelia balancing everything and talks to Teddi about it. Teddi offers some sound advice and says she needs to fail to succeed.

– Kyle is trying to get her clothing in stores. She asks Sutton for advice, who suggests she sells it as Yacht-Wear.

– Sutton is also going through post divorce life changes by opening a store.

-Denise is moving into her new house after the fire and facing legal issues with ex Charlie Sheen. She wants to keep things civil and positive for her daughters though, and I have to respect her for that.

–  Denise also needs hernia surgery. She ends up loopy from it, but Aaron takes care of her. It was also more invasive than she thought.

– Garcelle’s oldest son is having a baby! Congrats!

-Erika says she is sick of defending her 20 year marriage to an older man. (Which is no one’s business anyway!) It’s obvious they love each other, so good for them.

– Teddi invites the girls to her all in retreat….with interesting reactions.

-Erika plans to do Broadway and her husband gives her blessing, making her cry.

– I feel kind of bad no one wants to go to Teddi’s retreat. Lisa’s reaction to how Teddi should act is…..odd. Just say you can’t go and leave it at that.

– Sutton says a mayor is hot at her store opening.

– Teddi is upset no one wants to go to her event. However,she did need to do it at Sutton’s event.

America’s Got Talent 15: Who Got The First Golden Buzzer?