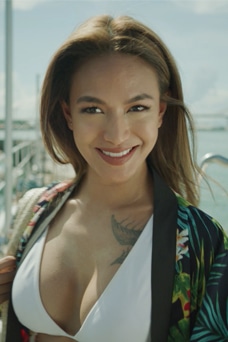 Samantha Richelle is an up and coming actress who is already taking the television world by storm. She can currently be seen on WGN America’s Almost Paradise alongside Christian Kane and Arthur Acuna. Samantha plays the role of Kai and is slowly but surely becoming one of Hollywood’s Stars to Watch.

TVGrapevine recently sat down with Samantha in an exclusive interview. Below are some of the highlights from our chat:

1. Samantha fell in love with her character from day one. She plays a detective who works with Alex (Christian Kane) and while here is initially some tension between them, their relationship eventually evolves.  While you will need to tune in to see wha all this means for the characters, Samantha hinted that it is a very interesting, compelling storyline.

Kai also has to fight against gender norms, which is not only a big part of her storyline, but also comedy into play when she is dealing with her coworkers. She knows she has to prove herself as a young female detective, but manages to balance kicking ass with being compassionate.

2. She loved every moment of filming and being on set. One of her favorite parts was being on location in the Philippines, where she got to be on the beach. Despite the fact that it rained during shooting, she made the best of it.

She also enjoyed working with the cast and crew, saying they were all full of wonderful, positive energy. It allowed for there to be a lot of moments, making it an experience she will never forget.

3.  During filming, Samantha also got to learn how to fight. She learned everything from jujitsu to stick fighting with other kinds thrown in as well. It was something she really enjoyed doing,  even though it was a bit challenging in the beginning. She also got to learn scuba diving, which you will see in a future episode.

4. So what are some of Samantha’s future plans?  As of right now, the show is her ‘baby,’ so to speak, but she wants to do more. Her dream role is to be a superhero, which she will definitely rock at when the time is right!

5. In addition to acting, Samantha also has a fashion line, which launched last year. It was inspired by her love of art, fine arts degree and love of fashion design. She collaborated with some friends and thanks to good timing, it all came to fruition. Her line can be found on her website www.samanharichelle.com.

Keep checking back for more news on Samantha.