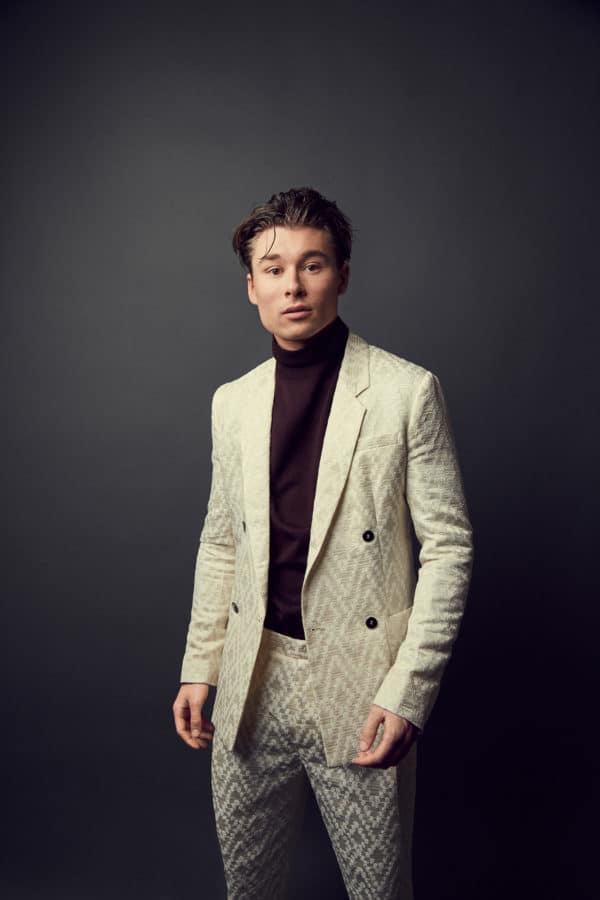 Utopia Falls star Phillip Lewitski took time out of his busy schedule to talk to TVGrapevine about his life and career.

I was born into a music-filled household. There was always music playing everywhere all the time. I have 7 siblings and we all play an instrument. At one point we had a little family orchestra going. I always wanted to apply my passion for music to my career in acting and this opportunity did that exactly. It’s not every day that you get to work on both of your passions at the same time. Throughout my career, I’ve always been drawn to darker characters; the outsiders, the ones who don’t belong, the rejects. I like to explore those darker areas of myself. I also would really like to play a character who is dealing with some serious mental conditions because I think that mental health needs to be talked about more and I would like to do something to start that conversation within people.

How would you describe Utopia Falls?

Utopia Falls starts off as this perfect story in this utopian society that everyone today dreams our world could be like. No discrimination against race, gender, sexual orientation. New Babyl is a society that accepts everyone for who they are. Four districts make up New Babyl; each has its own unique way of helping society move forward. Progress sector is a place of scientific study and medical innovation. Reform is where citizens who have transgressed against the laws are given the opportunity to redeem themselves under the watchful eye of the city’s police force. Nature sector is tasked with growing and harvesting the city’s food supply and Industry sector handles building and manufacturing for New Babyl. All four sectors are ruled by The Tribunal, a 6-person council. There is a big performing arts competition every year called The Exemplar where 24 16-year olds from each of the four sectors compete. People take much pride in cheering on the candidate from their sector. It captures the spirit of New Babyl and is a big source of entertainment and celebration for the citizens.

What attracted you to the role of Apollo?

The second I read the script and the character breakdown I knew I was meant to play this role. Sometimes getting into character can be a difficult task but for me, Apollo was one of the easiest characters I have ever taken on. I think that feeling of being able to fall into the arms of Apollo so easily really attracted me to the character. I also really respected my first conversation with creator R.T. Thorne and showrunner Joseph Mallozzi. I remember how open they were to my ideas around my cultural background. I also noticed how extensive the research was by the music producers and drum choreographers to really bring honor to telling the story of Apollo and where he comes from.

In what ways do you relate to him?

There are too many things to list but one that sticks out, in particular, is I remember when I first read the breakdown of this character they had written in there that Apollo only plays his instruments by ear. I laughed at that because I am the exact same way. When I was in violin lessons when I was younger I remember my teacher would get mad at me because I would always memorize the notes and would never read the sheet music. The main reason why is because I felt it easier to do it that way but also I could never really read music so I had to memorize it. My teacher would get upset with me because he said that was his job, to teach me how to read music. I would nod and agree but still fall back into my old ways and memorize by ear. I remember I would flip through the sheet music while playing so that it looked like I was following along to please the teacher but I was never actually reading it.

From the first table read I instantly felt this incredible energy from my castmates. It was like this unspoken word that we were all in this together and that we were going to have each other’s backs through the whole process and we did. We almost instantly became this tight-knit family. With a young cast, it’s very easy to get caught up in a lot of drama on set especially when you are working together every day and the days can be really long sometimes. People can easily get agitated or annoyed but that never happened with us. I remember we were working a really long night shoot and everyone was exhausted but we all had a way of amping each other up. We would go into each other’s trailers and hang out or run lines or just talk if someone was going through something. We are super close friends on and off set I really couldn’t ask for a better group.

What are some of your favorite memories from working on the show?

One of my favorite memories would be a drum sequence in episode 8. We shot this performance in a massive stadium. We had hundreds of extras and double the crew to get coverage of the whole thing so the anxiety of performing on a stage like that in the show felt super real shooting it in real life. I enjoyed that pressure and called my mom right before the performance for guidance from our ancestors and it was a really moving performance for me.

I’m really excited to start shooting a feature film later on this year. I can’t give much detail on anything but it is a project with a subject matter that is very important in today’s society and those are the kind of stories I love to tell.

I can flip my eyelids inside out.

I enjoy watching all genres of TV. I can’t pinpoint one show in particular.

I just want to thank some of the music producers on the show David Hayman and Nikhil Seetharam for their guidance, patience, and education they put forward to really bring honor to this character and his culture. I also want to thank the band “A Tribe Called Red” for letting your music inspire Apollo.