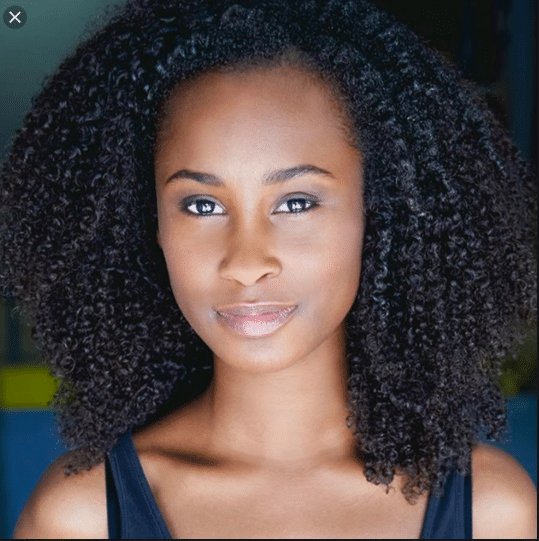 Keeya King opens up to TVGrapevine about her life, career and more!

Tell me about yourself.
I have had an untraditional life path, which has shaped me into the artist I am today. My parents were teens when I was born and struggled to make ends meet. Their strength, perseverance, and wisdom, are qualities that I constantly carry over into my work as an actor, continually digging for honesty and honouring all feelings. I found acting while in high school. I struggled to find a way to express myself and wanted to build a community. I began signing up for school plays and became enamoured by acting, getting lost in my imagination. I eventually found my own way to acting classes and studios and began auditioning for film and television on my own. Acting and my creative work has been a way for me to make sense of the world I live in.

What made you decide to do MADAM CJ WALKER?
I auditioned for the role of Peaches through a self-tape and when I got the call that I booked the role on “Madam CJ Walker”, I was actually watching “Tiffany Haddish Presents: They Ready”. It’s hilarious and a crazy coincidence, considering Peaches crosses paths with Lelila Walker, played by Haddish. Overall, I’m extremely honoured, humbled, and excited to be part of telling the story of an iconic Black Woman. Madam CJ Walker drastically changed the way we view business and black hair. I truly connected with Peaches’ struggle in that world. I am also grateful to be working with outstanding creators like Nicole Jefferson Asher, Demane Davis, and so many others that are just incredibly talented and intuitive. It was truly a blessing.

What was the biggest challenge?
I think the biggest challenge was actually capturing the feeling and vibe of this young woman that I am playing. Peaches is this tomboyish singer who is effortlessly cool, smooth, and I am the exact opposite; awkward, clumsy, and introverted. However, that is the work of the actor/actress to bring about the parts of yourself that is of service to the role and the story.
What are some of your favorite memories from doing the show?
I have quite a bit of favourite memories of the show. I think my favourite would be being able to see an actress like Octavia Spencer work. Oh my word, she is incredible! So many gems picked up everyday. It happened to be my birthday one day while we were shooting the series, and Octavia got everyone to sing Happy Birthday!

What do you hope people like about it?
I think art is subjective and people will like different elements of the series and connect to different moments. As for the story, I hope more people become aware of the entrepreneurship of a black pioneer like Madam C. J. Walker who achieved success during a time when it was unheard of for a black woman.

Tell me about Van Helsing.
Van Helsing is television show about a world dominated and controlled by vampires. Season four continues the story of Vanessa Van Helsing and her band of heroes as they fight to reclaim the world after vampires took over during ‘The Rising’. The character that I play is named Violet. Violet is a young girl whose a trained fighter and has lived a sheltered life with her father, Hansen, in a military compound. Violet learns she has some really unique powers/gifts and begins to question her true identity. Violet is on a journey to discover her identity and save humanity.

What was the biggest challenge?
This being my first series regular role, it brought about many challenges that I enjoyed overcoming. Playing Violet gives me an opportunity for growth and to delve deeper into my craft. Violet is a trained fighter and before working on this series I had limited knowledge of fight/stunt training. I mean a little kickboxing here, and a lot of yoga there, but I’ve never had to know how to roundhouse kick and take down a 7ft man, and Violet does that repeatedly throughout the series! Luckily, I worked with the amazing stunt choreo team of Kimani Ray Smith, Dan Rizzuto, and Maya Mactumpag who make it all look effortless!

What are some of your favorite memories from doing the show?
I have so many favorite memories from Van Helsing. One moment that I am thinking of right now, is Violet’s fight with The Big Show, Paul Wight. He and I shot this fight scene over the course of several days in this bloody pit, it was great! At one point, I actually thought I punched his teeth out, that part, not so great. He’s a truly talented fighter and actor, and I learned so much working with him.

What else are you working on?
I am actually training for a series right now, I love sharing my journey and work on social media. I’m on twitter and instagram. @KeeyaKing

Tell me a fun fact about yourself?
I absolutely love Bo Staffing! It’s when you fight with a staff in your hand. I posted a video of my beginning training, which is fun!
Here’s the link: https://www.instagram.com/p/B1w7UerA_LQ/

What are you watching on TV these days?
Bob’s Burgers, A Black Lady Sketch Show, and Pose. Although I act in a lot of dramas, I’m all for the comedy and outrageousness of life